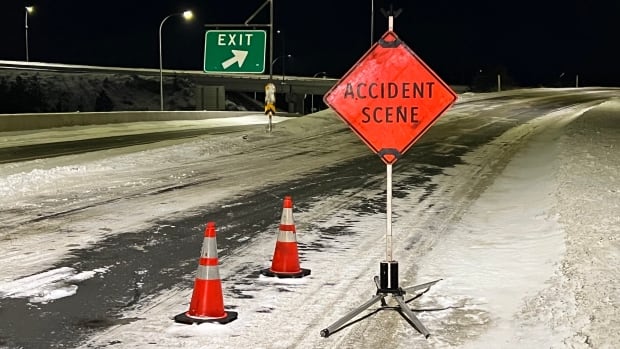 All of the remaining patients in hospital from a deadly Christmas Eve bus crash on Highway 97C in B.C. are expected to survive, according to an Interior Health official.

Michaela Swan, a spokesperson for the health authority, said seven people who were brought to three hospitals after a passenger bus rolled on the Highway 97C, also called the Okanagan Connector, on Saturday evening are still patients, down from eight on Sunday.

All seven have non-life threatening issues, after two patients previously listed as having serious conditions improved, Swan said on Monday.

Four people died and dozens of others were injured in the Ebus crash east of Merritt near the Loon Lake exit, which police said they suspect was caused by extremely icy road conditions.

Ebus cancelled all B.C. trips following the bus rollover that sent more than 50 people to hospitals.

No one from Ebus, the Alberta-based bus operator with multiple routes across B.C., was immediately available to comment on Monday. In a statement to CBC News, Ebus confirmed that B.C. services were suspended Dec. 26, due to poor weather and road conditions. Ebus said customers will be refunded for their tickets within 72 hours.

The company’s Facebook page said its services will resume on Tuesday, Dec. 27.

Swan said she doesn’t know how many health-care staff were called in to deal with the crash, but that many came in without being asked when they heard of the news.

“What we did hear from the front line was just that initial heart-sinking feeling when you hear about this accident and the impacts to those potential patients and their families,” Swan said.

“It actually caused Interior health staff and physicians just to respond to the sites knowing you’re going to need all hands on deck.”

On Sunday, RCMP confirmed that four people had died in the accident that involved no other vehicles. Police have not released the names of those who died.

As a result of the crash, Interior Health said in a statement Sunday that 52 people were sent to hospitals, of which 36 patients required medical treatment.

RCMP said Monday afternoon they were facing issues identifying all passengers who were on the bus. Due to the urgency of the situation, victims were transported to local hospitals and police said many left before they could be identified. While records of those who pre-booked tickets were available, the names of those who booked and boarded the bus at the time of departure have been difficult to confirm.

According to police, there were international tourists on the bus who are now trying to get their luggage back to leave the country. Police said they are working with Ebus to get them their luggage.

The bus, travelling from Kelowna to Vancouver, went off the road and rolled onto the passenger side of Highway 97C also called the Okanagan Connector, near the Loon Lake exit, which is 330 kilometres east of Vancouver in the Southern Interior.

The Ministry of Transportation and Infrastructure said in a statement Monday afternoon that a crew of maintenance workers on the ground monitored highway conditions and spent all day Saturday plowing, salting and sanding the Connector.

“They reported winter driving conditions, and a nearby weather station indicated low precipitation,” the statement read.

DriveBC, the communications arm of the B.C. Ministry of Transportation, reported a ‘vehicle incident’ around 7 p.m. PT Saturday and shut the highway between West Kelowna and Aspen Grove.

It reopened around 8:20 a.m. Christmas Day, according to DriveBC.

Police said in a statement Sunday that the bus rollover is believed to have been caused by “extremely” icy road conditions, although an investigation into the exact cause continues.

A week of winter storm warnings brought significant snow, along with avalanche risk advisories and highway closures throughout the province.

On Sunday, Environment Canada issued a freezing rain warning for the Okanagan Connector between Merritt and Kelowna that lasted until Monday afternoon.

Ebus announced through its social media page that its services will resume Tuesday, Dec. 27.