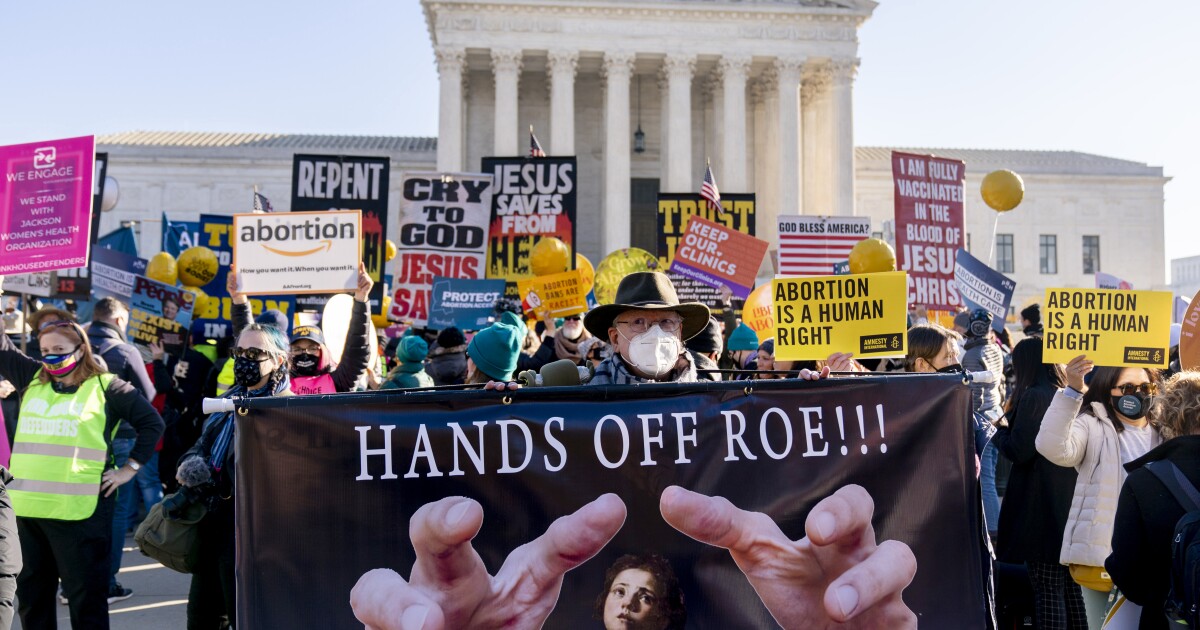 At the start of 2022, the political consensus was Democrats were toast. Inflation was at record highs, President Biden’s approval numbers were slumping and precedent pointed to odds heavily stacked against the party that held the White House in the November midterms.

Nine months later, inflation is still high, Biden’s ratings remain subpar and the history books are unchanged. Yet the chatter among pundits and party strategists now centers on whether the Democrats’ might avoid a rout this fall — or even, improbably, keep their hold of Congress.

The narrative may flip once, or a few times, more during this nine-week sprint to the general election that customarily begins in earnest after Labor Day. While conventional wisdom often churns during the campaign season, the state of play is particularly enigmatic in this unsettled political moment.

Since the last national vote in 2020, the country has endured, among other things, an attack on the U.S. Capitol, an ugly withdrawal from a 20-year war in Afghanistan, the reversal of Roe vs. Wade and an FBI search of a former president’s home. There have been the continuing horrors of mass shootings in schools, supermarkets, and even a 4th of July parade. And the COVID-19 pandemic, while waning from the political forefront, still weighs on the nation’s physical and mental state.

Polarization has turned personal, as a recent Pew report found Democrats and Republicans increasingly view people in opposite parties as immoral and dishonest. Faith in the country’s institutions, such as the presidency and the Supreme Court, has hit a record low average, according to Gallup. Nearly 6 in 10 of American voters in a New York Times/Siena College poll said the country’s system of government needs to be majorly reformed or completely replaced.

“It feels really fragile right now. To me, that’s what is unprecedented about this moment,” said Christopher Ojeda, a UC Merced political scientist who researches how politics affects mental health. “People are really wondering — is this democratic experiment going to keep working as we move towards the 2024 election?”

All of which is to say, it’s weird out there.

By traditional metrics, Democrats remain disadvantaged. In the post-World War II era, the president’s party has lost House seats in every midterm election except in 1998 (during President Clinton’s impeachment, widely seen as GOP overreach) and 2002 (in the aftermath of 9/11). The Senate is only slightly friendlier, with the ruling party avoiding losses five times in the last 19 midterm cycles.

In a deeply divided nation, the one thing unifying Americans is a shared sense of unease. A vast majority believe the country is heading in the wrong direction, but fewer agree on why that is — and which political party is to blame.

This occasional series, America Unsettled, will examine the complicated reasons behind voters’ decisions in this momentous and unpredictable midterm election.

Republicans are in prime position after redistricting, needing to flip only five seats to capture the House majority. And voters’ pessimism on the erratic economy — in which hiring is strong but inflation is at a four-decade-high — advantages the GOP.

“The numbers and fundamentals don’t lie,” said Matt Gorman, a GOP strategist and former communications director of the National Republican Congressional Committee, which works to elect Republicans to the House. He pointed to Biden’s approval rating, which still averages in the low 40s, as “the one number above all others that I’m looking at.”

Still, election prognosticators have recently recalibrated their views, churning out analyses that GOP control of the House is “no longer a foregone conclusion” and “the Senate majority is up for grabs.”

Recent polls have shown some movement in Democrats’ favor. Since mid-August, they’ve claimed a slight edge, on average, when voters are asked which party they will back in congressional elections this fall, after trailing Republicans for the entirety of 2022. In pivotal Senate races, Democratic candidates have largely outpolled their opponents, and while the House is a stronger playing field for Republicans, forecasters have revised downward the number of seats the GOP could likely pick up.

Those shifts are attributed to several factors, including Democrats’ recent legislative success and steadily dropping gas prices. But none loom quite as large as the Supreme Court’s decision in Dobbs vs. Jackson Women’s Health Organization. The ruling, released in late June, overturned Roe, which for the last 50 years had guaranteed a federal right to abortion. It set off a ripple of sweeping bans in conservative states, including ones that make no exceptions for cases of rape, incest or threats to the mother’s life.

Prior to the decision, abortion had generally been a bigger motivator for those who oppose it and the issue had ranked low in polls on voters priorities, lagging behind economic concerns. But in five special elections held since Dobbs, Democrats won a higher vote percentage than Biden did in those districts in 2020, and in Kansas, abortion rights supporters decisively defeated an anti-abortion constitutional amendment — fueling the sense of an electoral earthquake.

A dramatic spike in new voter registration among women foreshadowed the surprise Kansas vote, said Tom Bonier, the CEO of the Democratic political data firm TargetSmart. He since has seen women make up surging numbers of new registrants in battleground states such as Wisconsin, Michigan and Pennsylvania. While newcomers constitute a small percentage of voters, he said those trends could reflect the intense reaction to Dobbs from the electorate overall.

“I’ve gone from surprised that we’re seeing these unprecedented numbers in registration and turnout to a point where I would be surprised if we don’t look back and see Dobbs as an inflection point,” Bonier said. “I do think it is that type of before and after moment where everything changed.”

Ken Spain, a Republican strategist and former spokesman for the House GOP campaign arm, agreed that Dobbs roused lethargic Democrats, but said it’s often the case that disaffected base voters come home to their party as the midterms near.

“The question is, is this the consolidation that would normally take place post-Labor Day happening earlier? Or is there a fundamental shift in the trajectory of the election?” he said. “I don’t think anybody knows the answer to that.”

While the landscape still favors his party, Spain said, the GOP has hampered itself by not keeping a relentless focus on Biden.

“Republicans today have not done a very good job of making this a referendum election and tying Democratic candidates to the president,” he said.

The missed opportunity is partially of the GOP’s own making. In key battleground states such as Pennsylvania and Arizona, Republican primary voters picked political novices for Senate who had embraced hardline positions. Those candidates have struggled to pivot to a more moderate general electorate, drawing the focus to themselves instead of Biden and their Democratic opponents.

The GOP also strains to keep the spotlight on Biden when another political leader — Trump — continues to command attention. His myriad legal battles, including the FBI search of Mar-a-Lago for classified documents, and the ongoing hearings on the effort to overturn the 2020 election and the Jan. 6, 2021, assault on the Capitol, are constant reminders of the volatile politics of the Trump era.

Biden, meanwhile, appears to be receding in people’s minds; a recent Pew Research Center poll found that nearly half of registered voters said Biden will not be much of a factor when they cast their ballot, compared to 31% who think of their midterm vote as a sign of opposition to Biden and 19% whose vote signals support. Those seeing Biden as a nonfactor went up 11 points in August, compared to five months ago.

Biden’s decreasing significance in determining how people vote is “pretty unusual…especially in this era, when the president is so dominant in terms of policy,” said Carroll Doherty, Pew’s director of political research.

Surveys have sent other idiosyncratic signals, tilting more favorably towards Democrats even as overwhelming majorities continue to say the country is on the wrong track. A Wall Street Journal poll last week found Biden’s approval rating has ticked up to 45%, while the generic congressional ballot has swung eight points in the Democrats’ direction since March — all while just a quarter of respondents said the nation is headed in the right direction.

“There’s a lot of data coming out that is contradicting itself, going both directions, and it’s hard to know what to make of it,” said Ryan Enos, professor of government and director of the Center for American Political Studies at Harvard University.

The haziness has led to a familiar refrain among those who have made politics their profession: “I don’t know.”

“We have to engage in this election with an acceptance of a broader sense of uncertainty,” said Bonier, the Democratic data analyst. “This still could end up being a wave election for the Republicans. Or it could be a colossal failure for Republicans and a deviation from the historical precedent of half a century, and Democrats could hold on to the Congress.”