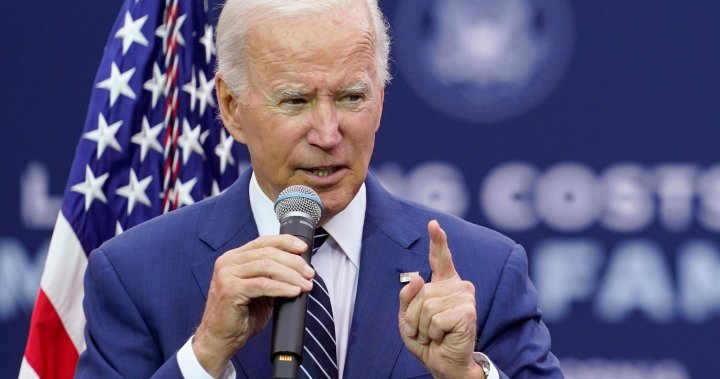 President Joe Biden is highlighting his administration’s efforts to lower prescription drug costs on Friday as part of his three-state Western tour this week, as he confronts a sobering inflation report in the waning weeks before midterm elections.

Biden visited a community college in Irvine, California, to meet with older adults and tout his administration’s efforts to reduce inflation and drive down costs. The trip comes on the heels of an announcement that millions of Social Security recipients will get an 8.7% boost in their benefits in 2023, a historic increase but a gain that will be eaten up in part by the rising cost of everyday living.

Biden said that still, seniors “are going to get ahead of inflation next year. For the first time in 10 years Social Security checks are going to go up while Medicare premiums go down.”

“It’s a big deal for seniors,” he added.

Despite the president’s efforts, inflation is rising, and Republicans are capitalizing on higher prices, seeing openings in California and elsewhere to potentially pick up U.S. House seats. The president will also travel to Oregon before heading back East as the usually Democratic-leaning governor’s race closes with an independent splitting votes.

Consumer prices, excluding volatile food and energy costs, jumped 6.6% in September from a year ago _ the fastest pace in four decades. And on a month-to-month basis, such “core” prices soared 0.6% for a second straight time, defying expectations for a slowdown and signaling that the Fed’s multiple rate hikes have yet to ease inflation pressures. Core prices typically provide a clearer picture of underlying price trends.

1:33
Biden makes chilling remarks about how close world is to nuclear catastrophe


Biden acknowledged the issue on Thursday, saying that “Americans are squeezed by the cost of living. It’s been true for years, and folks don’t need a report to tell them they’re being squeezed.”

He also returned to a metaphor he used often during his first year in office, talking about issues that Americans talk about around the “kitchen table,” touting his administration’s efforts to lower costs even as inflation rises.

“From prescription drugs, to health insurance, to energy bills, and so much more,” he said. “We’re standing up for working people and their right to get a raise and get a better job.”

Biden also signed an executive order that will direct the U.S. Department of Health and Human Services to look for additional ways to lower drug costs.

The Inflation Reduction Act signed into law earlier this year already requires that Medicare begin bargaining over the price of a handful of drugs starting next year. The agency is fine-tuning how that process will work, hiring new employees for a drug pricing division and is expected to pick the first 10 drugs that will be negotiated in 2023.

The new law will lower drug costs for the 49 million people on Medicare in a number of other ways that have been less controversial. It makes vaccines free, caps monthly out-of-pocket insulin costs at $35, and limits out-of-pocket drug expenses at $2,000 starting in 2025.

“We took on big pharma and we beat them, finally,” Biden said, but called on Congress to go even further to bring insulin prices down for all Americans, not just those on Medicare.

“Imagine being a parent, imagine not having enough insurance, not being able to afford it, and looking at your son and daughter and know if they can’t get the insulin they could be permanently scarred” and die, Biden added.

Any additional proposals to curb the cost of drug prices are likely to be met with resistance.

That newly-acquired power to negotiate drug prices is controversial, with the powerful pharmaceutical industry lobbying against the rule and considering legal actions to prevent its implementation. Republicans have already proposed legislation that would strip Medicare’s negotiation ability before the haggling has even begun.


Starting next year, drug companies will also have to pay penalties to Medicare if they raise the cost of their products at a rate that outpaces inflation.

Biden also used the opportunity to provide a boost to Democratic Rep. Katie Porter, who is facing a close re-election fight this year. He praised the lawmaker as a “fighter,” adding that, “No drug company wants to testify in congress before Katie.”

Biden added, “she is incredible at what she does.”