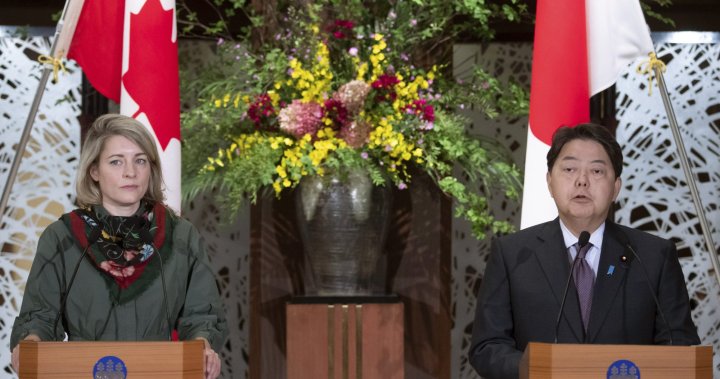 Canada and Japan have launched talks aimed at sharing military intelligence, as the two countries try countering growing threats from China and Russia.

“Through the exchange of intelligence, we will be able to better counter threats at home, and work alongside partners to create greater stability in the region,” Foreign Affairs Minister Melanie Joly tweeted Tuesday.

She met with her Japanese counterpart Yoshimasa Hayashi in Tokyo, adopting an action plan to strengthen co-operation on defence and economic security.

That plan included the launch of formal talks on the intelligence-sharing pact, dubbed the General Security of Information Agreement.

The two sides aim to reach an agreement “as soon as possible” to facilitate information sharing and further strengthen co-operation between their militaries, the Japanese Foreign Ministry said.

Japan has similar intelligence-sharing agreements with NATO and with eight individual countries, including the United States, Australia, Britain, India and South Korea.

For its part, Canada is part of the Five Eyes intelligence alliance, which includes Australia, New Zealand, the United Kingdom, and the United States.

Japan has been deepening defence co-operation beyond its key ally, the U.S., in recent years in the face of China’s increasing assertiveness in the region, as well as growing concern that Russia’s invasion of Ukraine could further embolden Beijing.

On Tuesday, Japan and Canada also agreed to expand and deepen their military ties by holding joint exercises between the countries as well as with the U.S.

They stressed the importance of working together to secure the rules-based international order and pledged to achieve a “free and open Indo-Pacific” vision, which Japan has been promoting with the U.S. and other democracies that share concerns about China’s growing influence in the region.

12:21
Canada needs to play a part in world security: Joly

The Liberals have been under pressure for months to release their Indo-Pacific strategy, which industry groups hope will outline the countries Ottawa plans to grow closer to and those the government sees as risky.

Joly has promised the strategy will come before the end of the year, sometime after the Chinese government holds a major summit next week on its goals for the coming years.

And Japan and Canada agreed to strengthen technical exchanges on nuclear technology, including those concerning small modular reactors that Prime Minister Fumio Kishida has ordered a government panel to consider as a possible option for future development.

Energy supply shortages and rising utility costs, as well as pressure to meet a 2050 carbon neutrality goal, has prompted Kishida’s government to place further emphasis on atomic energy years after many of Japanese nuclear plants were shut down after the 2011 Fukushima disaster.

—With files from The Associated Press