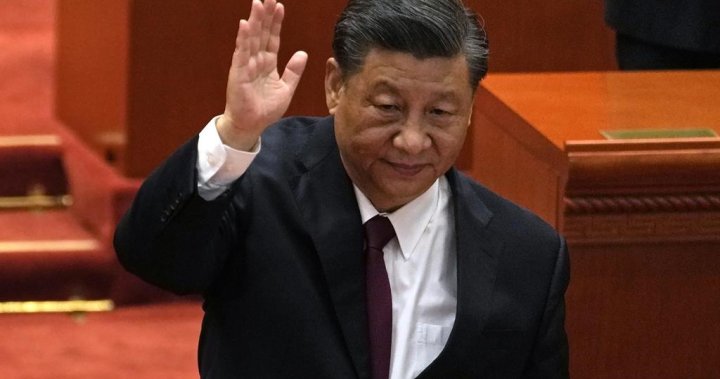 China on Sunday opens a twice-a-decade party conference at which leader Xi Jinping is expected to receive a third five-year term that breaks with recent precedent and establishes himself as arguably the most powerful Chinese politician since Mao Zedong.

Xi is expected to issue a lengthy address at the opening session, but little change is foreseen in his formula of strict one-party rule, intolerance of criticism and a hard-line approach toward COVID-19 including quarantines and travel bans even as other countries have opened up.

As with most Chinese political events, little information has been released beforehand and the congress’ outcome will only be announced after several days of closed-door sessions. How much has been decided in advance and how much is still to be hashed out in face-to-face meetings also remains unknown.

As China’s Communist Party meets, here’s what Xi’s new team may look like

At a two-hour news conference Saturday, the congress’ spokesperson Sun Yeli reaffirmed the government’s commitment to its “zero-COVID” policy despite the economic costs and repeated its threat to use force to annex self-governing Taiwan.

But Sun offered few details about what if any changes would be enacted to the party’s charter at the meeting, which is expected to last about a week. The congress is the 20th in the history of the century-old party, which boasts some 96 million members, over 2,000 of whom will attend the Beijing meetings.

The changes will “incorporate the major theoretical views and strategic thinking” concluded in the five years since the last congress, said Sun, a deputy head of the Chinese Communist Party’s Propaganda Department who is not well known outside party circles.

2:12
China may have committed ‘crimes against humanity’ against Uyghurs: UN report


The amendment or amendments will “meet new requirements for advancing the party’s development and work in the face of new circumstances and new tasks,” Sun said.

Xi has left little room for further political aggrandizement, having placed himself thoroughly in charge of domestic affairs, foreign policy, the military, the economy and most other key matters overseen by party working groups that he leads.

The congress comes as China’s economy is facing major headwinds amid a near-collapse in the real estate sector and the toll on retail and manufacturing imposed by COVID-19 restrictions that upped the regime’s already intense monitoring of the population and suppression of free speech.

0:31
China urges U.S not to be ‘troublemaker’ after its warships transit Taiwan Strait


In his remarks, Sun said China would exert all efforts to bring Taiwan under its control peacefully. But he said China would not tolerate what he called a movement toward full independence backed by hard-liners on the island and their overseas backers_ presumably the U.S., which is Taiwan’s main source of military and diplomatic support despite the lack of formal relations in deference to Beijing.

Sun also offered no hope China would be backing away from “zero COVID,” which Xi and other leaders have made a political issue despite criticism by the World Health Organization and others that it is not a practical long-term solution given improvements in vaccines and therapies.

Many expect the policy to be continued at least until March, which Xi is expected to be given his third term as president and other top Cabinet leaders are installed.

China’s COVID prevention measures to be more scientific, accurate: ‘The dawn is ahead’

While Xi faces no open opposition, his parting with the party’s former collegial leadership style to concentrate power in his own hands does rankle among the public and party officials, said political observer and dissident Yin Weihong, who has faced repeated police harassment for his opposition views.

“There’s a sense that he’s taken a cake formally divided amongst several and decided he’ll just have it all to himself,” Yin said in a phone call from his home south of Shanghai.