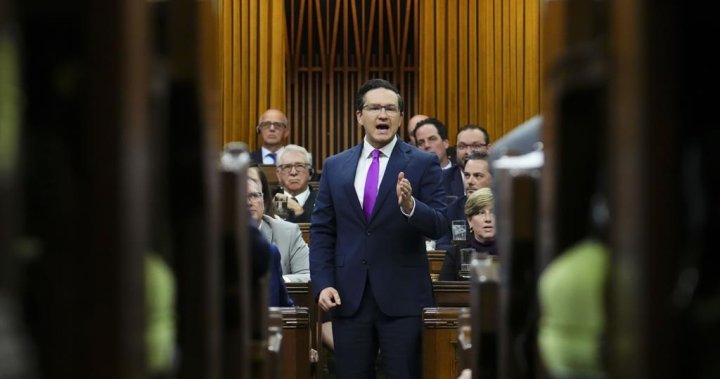 The fiscal update tabled by Deputy Prime Minister and Finance Minister Chrystia Freeland on Thursday projects a return to a balanced budget by 2027. It also includes new measures aimed at easing the cost of living and the transition to a green economy, while preparing for a potential recession.

“Conservatives will stand for the common people — their paycheques, their homes, their savings — and we will vote against this inflationary scheme,” Conservative Leader Pierre Poilievre said in the House of Commons after Freeland delivered the statement.

The opposition leader criticized the Liberals for not matching their $30.6 billion in new spending over six years outlined in the update with equal budgetary cuts, which he said will continue to drive up inflation and hurt average families.

He also pushed back on the explanations from the government — also made by central bankers and economists around the world — that the war in Ukraine and other external factors were the major causes of inflation affecting Canadians.

4:51
Singh says Trudeau government has ‘turned their backs’ in fall economic update, but will still vote in favour


“What’s to blame is a prime minister who has no control over Canadians’ money,” Poilievre said in French.

He later pointed to the continued high cost of living Canadians are facing on groceries, home heating and fuel, which he argued the fiscal update will not address.

“Canadians are out of money, and this prime minister is out of touch,” he said.

The party has spent months calling for a higher windfall tax on large corporations, including energy and grocery companies that have seen their profits soar during the COVID-19 pandemic, to help ease the burden on families — an issue the Liberals did not directly address.

“For Canadians who were told again and again that the prime minister was going to have their backs in this fall economic statement, he’s actually turned (his back),” NDP Leader Jagmeet Singh told reporters outside the House of Commons after Freeland spoke.

Singh said the NDP was also looking for the elimination of the GST on home heating, another party priority this fall as winter approaches.

Poilievre brought up rising heating costs as well, but blamed both the Liberals and NDP for supporting the carbon tax on fossil fuels.


Freeland defended the statement after delivering it in the House of Commons, pointing to the elimination of student loan interest and advance payments of the Canada Workers Benefit for lower-income Canadians as examples of government measures that will help address the cost of living.

For the current fiscal year, the mid-year budget update is forecasting a $36.4 billion deficit, which is about $16 billion lower than anticipated in the spring budget thanks to high inflation and a strong economic recovery boosting government revenue.

In the longer run, the federal government is forecasting a budget surplus of $4.5 billion during the 2027-28 fiscal year.

This marks the first time the Liberals have forecast a balanced budget since coming into power in 2015.

— with files from Global’s Craig Lord and the Canadian Press