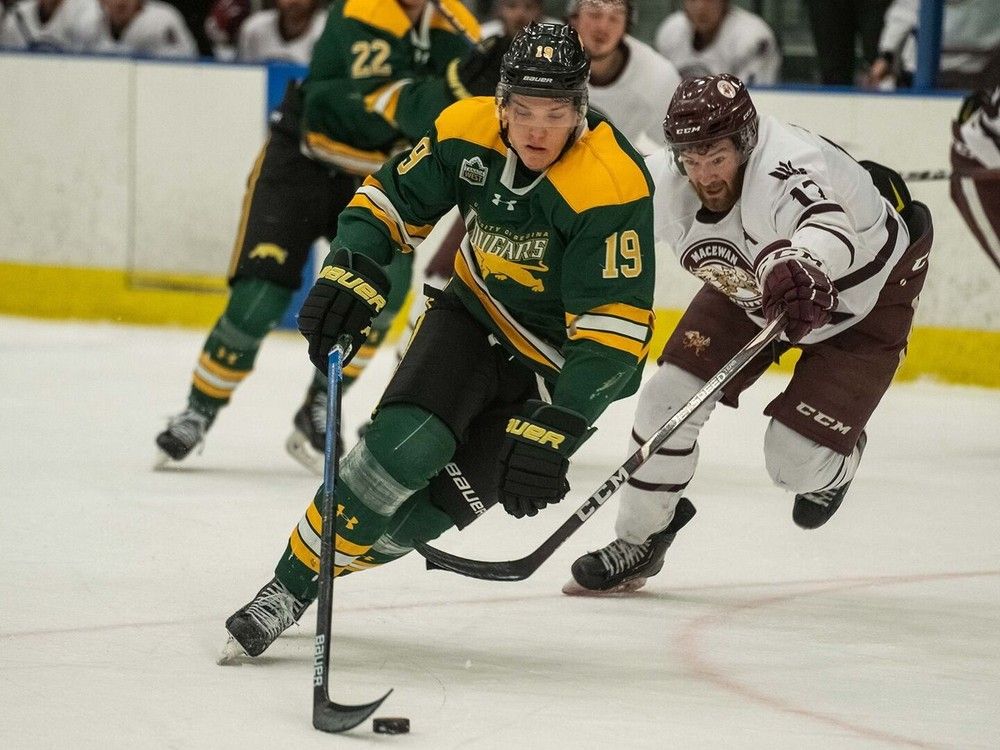 A weekend sweep of the MacEwan University Griffins has put the University of Regina Cougars men’s hockey team in the driver’s seat as it strives to secure a Canada West playoff position.

The host Cougars won 3-2 on Friday and 5-1 on Saturday to improve their record to 7-11-1 and move into sixth place in the conference. The top six teams advance to the post-season.

Regina trailed 2-1 on Friday before getting third-period goals from Eric Houk (at 7:23) and Brady Pouteau (16:41). Jayden Davis assisted on both goals at the Co-operators Centre.

Houk, Tyler Heidt, Scott Mickoski, Bryce Platt and Eric Pearce scored Saturday for the Cougars, who got 37 saves from Adam Evanoff. Houk is on a four-game goal-scoring streak.

The Cougars carry a four-game winning streak into this week’s set with the University of Calgary Dinos. Games are scheduled for Thursday and Friday at the Co-operators Centre. Faceoff is at 7 o’clock, both nights.

This past weekend, the Cougars women’s hockey team fell to 3-16-1 after losing 3-1 and 3-0 to MacEwan in Edmonton.

The U of R women’s basketball team remains in first place in Canada West after a weekend split with the host University of Winnipeg Wesmen.

Winnipeg won 76-52 on Friday, but the Cougars rebounded with a 79-76 victory on Saturday.

The Cougars and University of Saskatchewan Huskies are both 10-2, but the U of R holds down first place by virtue of its sweep of the U of S on Nov. 11 and 12 at the Centre for Kinesiology, Health and Sport.

On Saturday, Dayna Pearce paced the Cougars with 21 points (on the strength of four three-pointers), seven rebounds and seven assists.

The Cougars are to meet the UBC Thunderbirds on Friday and Saturday in Vancouver.

In men’s basketball, the Cougars dropped to 5-7 after losing a pair of games in Winnipeg.

The Cougars women’s volleyball team is coming off its first two victories of the season — home triumphs against the winless Brandon University Bobcats.

McEachern had 15 kills and 15 digs on Saturday. Hufnagel added 35 assists and 13 digs.

The Cougars are to play host to Winnipeg on Friday and Saturday. Both matches are set for 6 p.m., at the CKHS.

The Estevan Bruins handed the Battlefords North Stars their first regulation-time loss of the Saskatchewan Junior Hockey League season — a 5-0 setback at Affinity Place on Saturday.

Estevan-born Jackson Miller made 30 saves for the shutout while getting offensive support for Keagon Little, who had two goals. Gabriel Filion, Kade Runke and Evan Forrest were the other goal scorers.

Kalin, the game’s first star, forced overtime by scoring at 15:58 of the third period. Terriers goalie Caleb Allen made 31 saves en route to being named the second star.

Greta Henderson and Ashley Grice each had one goal and two assists. Brooklyn Nimegeers, Kadence Dansereau and Stryker Zablocki were the other goal scorers.

Zach Moore scored the shootout winner for the Saskatoon Contacts as they defeated the Regina Pat Canadians 4-3 in Saskatchewan Male AAA Hockey League action Saturday at the Co-operators Centre.

Moore also had two regulation-time goals as Saskatoon improved to 18-11-0-2. Luke Moroz scored twice for Regina (21-6-0-2), which was to play host to the Moose Jaw Winmar Warriors on Monday night.

The sports world is ever-changing, as are the times. Supplement your steady diet of sports coverage by subscribing to the Regina Leader-Post’s 306 Sports Fix newsletter. Each week, sports editor Rob Vanstone will provide additional commentary on the Roughriders, Pats and other teams/sports of interest, along with a peek behind the curtain. Click here to subscribe.