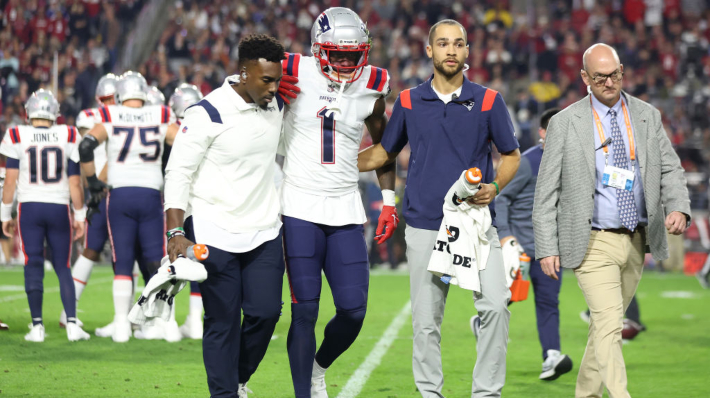 The NFL updated its policy on handling players with head injuries this season after the debacle with Tua Tagovailoa in which the Dolphins quarterback was allowed to return to a game earlier this season after a what was clear to everyone watching to be a head injury. Now, players flagged by the neurotrauma consultants who are supposed to watch every play for signs of a head injury must come out of the game for evaluation, and those who show signs of “gross motor instability” are immediately ruled out for the rest of the game.

However, the league’s new policy failed on Monday Night Football in a significant way after DeVante Parker was tackled, landing headfirst on the turf and was clearly wobbly and struggling to walk straight after getting up. No one from the NFL called down to instruct the officials or team doctors to remove Parker from the field, and he tried to line up for the next play. His teammate, Nelson Agholor, recognized Parker wasn’t right and literally jumped up and down waving his arms as the Patriots were getting ready to snap the ball, demanding play be stopped so Parker could be taken off the field.

A failure by the concussion spotter. DeVante Parker could not stand up straight after hitting the ground. Nelson Agholor took a knee and was flailing desperately to try to get the play stopped for Parker. pic.twitter.com/TtjfOqyEbH

It was an awful look for the league, and Parker rightfully called out the NFL (while thanking Agholor) for failing to apply the protocol to protect him.

The NFL and NFLPA have launched an investigation into why play wasn’t stopped and what led to the failure of the system, because it was apparent to everyone, including the ESPN booth, that Parker wasn’t walking right after the hit and needed medical attention. Thankfully Agholor was adamant about getting his teammate off the field and was able to get play stopped, but for a league that has already had one major protocol failure this year with head injuries, there needs to be a significant discussion internally about how to better watch for these situations.