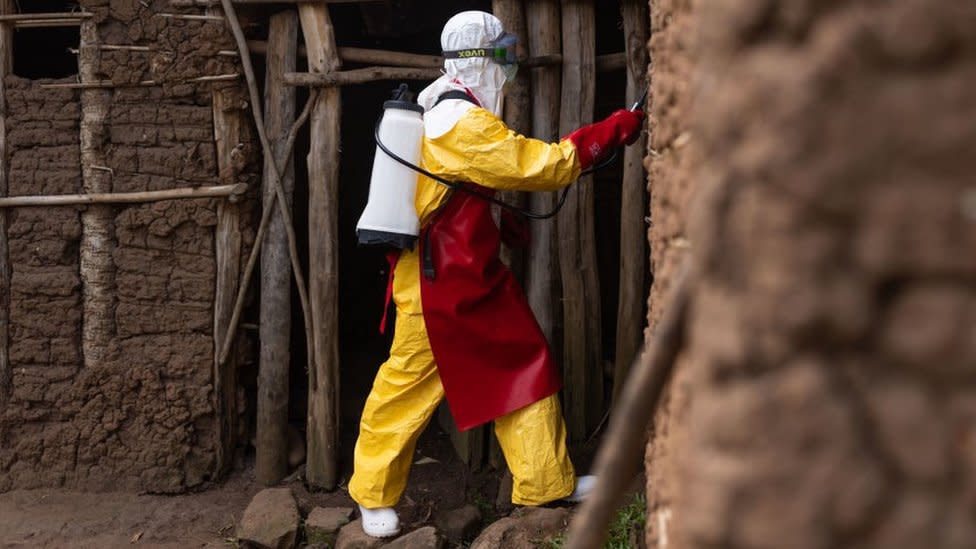 A three-week lockdown has been declared in two districts of Uganda as the country battles an Ebola outbreak.

Bars, nightclubs, places of worship and entertainment venues will be closed in Mubende and neighbouring Kassanda, and a curfew will come into force.

The move is a U-turn for Uganda’s President Yoweri Museveni, who previously said there was no need for such measures.

This latest outbreak has killed 19 people among 58 recorded cases.

However, the real number of deaths and cases may be higher.

The outbreak began in early September in Mubende, about 80km (50 miles) from the capital Kampala, and has remained the epicentre.

President Museveni had previously ruled out lockdowns, saying Ebola was not an airborne virus so did not require the same measures as Covid-19.

But on Saturday he halted all movement in and out of Mubende and Kassanda districts for 21 days.

Cargo trucks will still be allowed to enter and leave the areas, he said, but all other transport will be stopped.

“These are temporary measures to control the spread of Ebola,” he said in a televised address.

“We should all cooperate with authorities so we bring this outbreak to an end in the shortest possible time.”

The president had already ordered police to arrest anyone suspected of having the virus who refused to isolate.

And he has forbidden traditional healers from trying to handle cases. In previous outbreaks, healers have been associated with hotspots for spread of the virus.

The first recorded death in this outbreak was a 24-year-old man in Mubende. Six members of his family also died.

It later reached the capital Kampala, with one death recorded in October. But health officials said the city remained virus-free, as the man who died had travelled from Mubende.

This latest outbreak is of the Sudan strain of the virus, for which there is no approved vaccine. The Zaire strain, which killed 11,000 people in an outbreak across West Africa from 2013-2016, can be vaccinated against.

Symptoms include vomiting, diarrhoea and in some cases internal or external bleeding.

The incubation period can last from two days to three weeks, and the virus can be associated with other illnesses, such as malaria and typhoid.