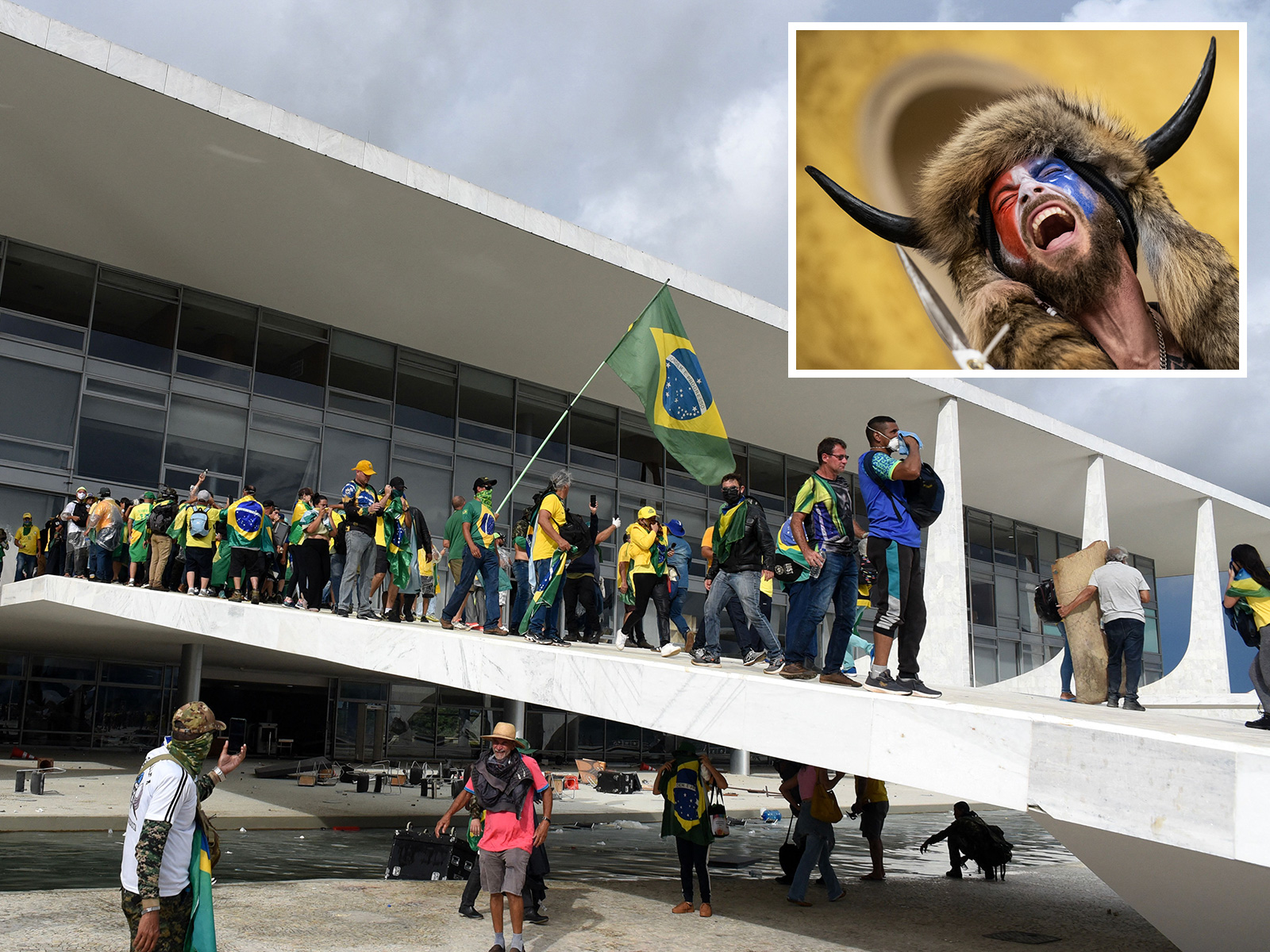 Shocking scenes emerging from Brasilia, the capital of Brazil, where pro-Jair Bolsonaro rioters briefly invaded the Three Powers Square, came on the week of the anniversary of the January 6, 2021, riot in Washington, D.C., and have drawn comparisons with the events that followed U.S. President Joe Biden‘s victory.

On Sunday, thousands of supporters of the former president stormed the area that is home to Brazil’s Congress, the Supreme Court and presidential palace, resulting in violent and chaotic scenes. The riot took place amid ongoing—and similarly unproven—narratives that the recent election, won by Bolsonaro’s left-wing opponent, Lula Da Silva, was subject to fraud.

Many obvious parallels between the two events have been observed, from the false “election fraud” narratives fueling the protests and the lack of police action to stop the rioters (along with unverified claims of law enforcement complicity), to the alleged involvement of some of the same key figures, including former President Donald Trump advisers Steve Bannon and Jason Miller.

But one striking image—of an extravagantly dressed rioter sporting a horned indigenous headdress—appeared to suggest yet another similarity, invoking the memories of Jacob Chansley, the infamous “QAnon shaman” from the Capitol riot.

As the dust began to settle following the violent attack on the heart of Brazil’s government, one photo that was shared widely featured a topless protester, sporting what appeared to be a native American war bonnet and holding a loudspeaker.

Many of the posts likened the Brazilian activist to the “QAnon shaman,” a QAnon follower who featured prominently at the January 6, 2021, riot at the U.S. Capitol.

That man, later identified as Jacob Anthony Angeli Chansley, pleaded guilty on September 3, 2021, to obstructing an official proceeding, and was sentenced to 41 months in prison.

“Brazil had its shaman too,” one Twitter user wrote.

“Brazil has their own damn shaman too 🤣,” the Hodge twins, conservative comedian brothers Keith and Kevin Hodge, tweeted.

The various posts have since received hundreds of thousands of engagements across multiple platforms.

While the photo of the colorfully dressed protester is indeed real and does come from a gathering of Bolsonaro supporters in Brazil, as other users and media outlets have noted, it predates Sunday’s attack.

The photo appears to have been taken at a September 7, 2021, right-wing rally in São Paulo, Brazil. Getty Images as well as a host of media outlets used it and other photos of the “Brazilian shaman” in their coverage of the protests at that time.

An article in Diario Do Centro Do Mundo, a Brazilian digital publication, dated September 7, 2021, features the same photo and suggests the man was “inspired” by the “Capitol Viking,” Chansley.

Identified as Julio Monteiro, the man reportedly carried a sign in support of Daniel Silveira, a federal deputy of Niteroi, who was convicted by Brazil’s Supreme Court and later pardoned by then-President Bolsonaro.

The article cites The Intercept Brazil co-founder Oliveira Cecilia’s Instagram post, dated September 7, 2021, as the source of the image.

“Nothing is created, everything is copied. In São Paulo, a man dressed as the “QAnon shaman” who was in the Capitol invasion, when Trump supporters organized a coup demonstration to question the result of the US elections,” the post states, in part, crediting photographer Guilherme Gandolfi for the photo.

Daniel Silveira told CNN that he had no idea whom the Chansley lookalike was, despite the two being pictured sharing a stage by photographers at the rally.

While the facts do not necessarily prove that Monteiro was not at the scene during last weekend’s upheaval in Brasilia, there is no evidence that he was, and none of the photos that feature him appear to be recent.

The original “QAnon Shaman,” Jacob Chansley, is serving a 41-month prison sentence and was not at the scene of Brazil’s Capitol invasion.

A photograph of a “lookalike” or copycat, wearing indigenous Brazilian headgear, dates to a different pro-Bolsonaro rally that took place in São Paulo in September of 2021. There is no evidence that he was involved in the recent storming of Brazil’s Congress and Supreme Court buildings.