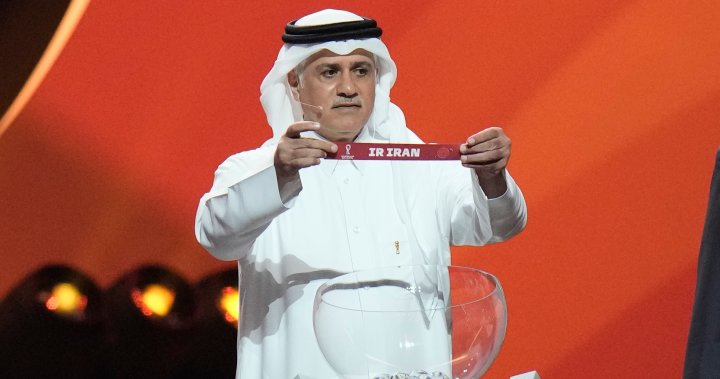 Ukraine‘s top soccer club on Monday urged FIFA to remove Iran from the World Cup because of the country’s alleged military support to the Russian invasion.

Shakhtar Donetsk chief executive Sergei Palkin accused Iran of “direct participation in terrorist attacks on Ukrainians,” suggesting his own country’s team should play in Qatar instead as a replacement.

“This will be a fair decision that should draw the attention of the whole world to a regime that kills its best people and helps kill Ukrainians,” Palkin said in a statement one day before his team plays at Celtic in the Champions League.

The White House said Thursday that the U.S. has evidence that Iranian troops are “directly engaged on the ground” in Crimea supporting Russian drone attacks on Ukraine’s infrastructure and civilian population.

And the head of Ukraine’s intelligence service, Kyrylo Budanov, said in a published interview on Monday that Russian forces had used about 330 Iranian-built “Shahed” drones as of Saturday — and that more had been ordered.

Russia and Iran have both denied that the drones used were Iranian-built.

‘Game-changing’ drone warfare in Ukraine may tee up new phase of conflict: official

Iran plays in the second game of the World Cup, on Nov. 21 against England, and then faces Wales and the United States in Group B. Wales qualified by beating Ukraine in the playoffs in June in a game that was delayed from March by the war.

FIFA did not immediately respond to a request for comment. However, if an Asian team was suspended there would be no precedent for FIFA to replace it with a European team at the World Cup.

Soccer’s world body does not typically suspend member federations because of military decisions by a national government, though Yugoslavia was barred from trying to qualify for the 1994 World Cup after United Nations sanctions were imposed during the war in the Balkans.

FIFA has suspended Russian teams following its invasion of Ukraine, which barred Russia from playing in the World Cup qualifying playoffs in March. FIFA cited risks to the security and integrity of its competitions, and Russia’s scheduled opponent Poland had refused to play that game.

FIFA is also resisting calls this month from Iranian fan groups to suspend the national team during a national crackdown on street protests in support of women’s rights and because of a long-time policy stopping women from freely attending games in soccer and other sports.

FIFA normally only suspends national teams when the country’s government is judged to have interfered in the independent running of the national soccer federation.

Five Asian confederation teams advanced to the World Cup to join host Qatar, and the United Arab Emirates was the next best in qualifying. The UAE lost a regional playoff in June to Australia ahead of the intercontinental playoffs.

0:36
Russia in ‘clear breach of international law’ amid attacks on critical infrastructure: Kariuki