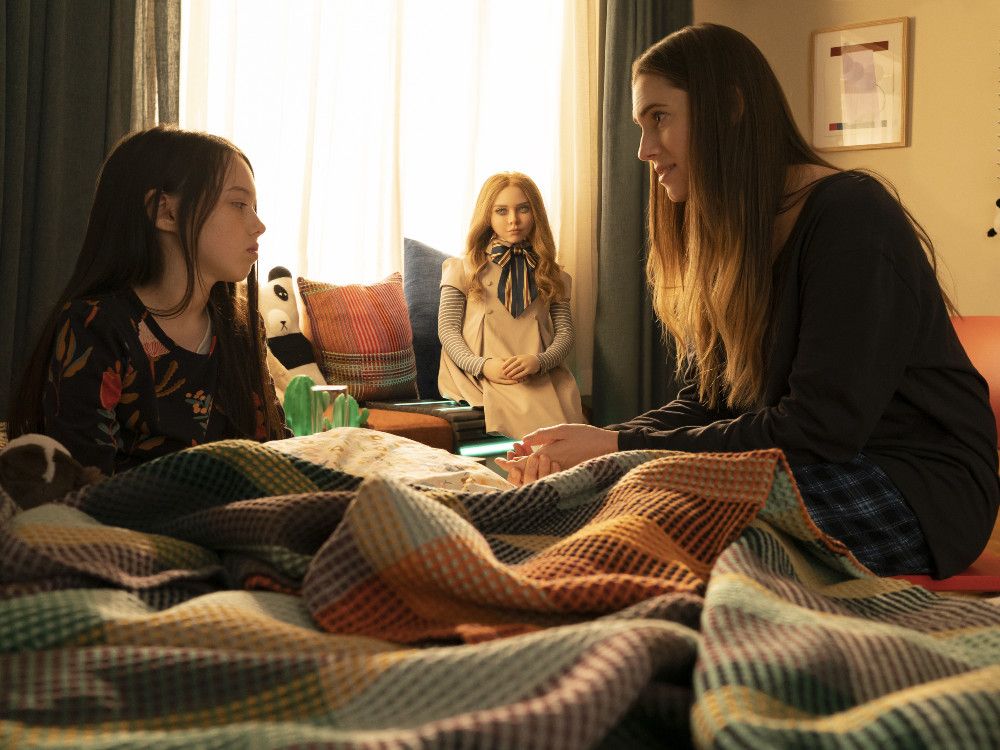 The doldrums of January are never a good time for movies. There are the occasional prestige titles that have already opened in their home markets and are just now arriving in Canada, like Tom Hanks in A Man Called Otto (Jan. 6) or Bill Nighy in Living (Jan. 13) – both excellent, by the way. There are the holdovers from last year – Avatar 2 and Black Panther 2 are still doing respectable business, and good on them I say.

But new releases? Puh-lease. Scrolling back from 2020 – the last year that made any sense – gives us such first-week-of-January titles as Underwater, Escape Room, Insidious: The Last Key, Underworld: Blood Wars, The Forest, The Woman in Black: Angel of Death, Paranormal Activity 5, Texas Chainsaw 7 and so on. Penny dreadfuls, some of which barely earned a penny.

Which brings us to M3gan.

I was fully prepared to hate this movie, based on its cornball trailer and deadly release date. I was already calling it “Muh-Three-Gun,” singing its name to the tune of the SNL parody MacGruber. It was going to suck.

And then it didn’t. Now, it’s not the second coming of motion pictures, to be sure. But look at the scrawled remarks in my notebook. “After Yang not Child’s Play.” “Spielberg’s A.I. but in reverse.” “Cheesy Ex Machina.” “Blonde HAL.” “Tiny Terminator.” “Saved by buffering?”

Honestly, the best thing about M3gan is that it doesn’t take itself too seriously. The movie opens with a fake advertisement for something called PurRpetual Petz, which seem to combine the worst elements of Furbies and the more addictive iPhone games. Gemma (Allison Williams) is a developer of such noxious toys, but the roboticist has her sights set on bigger projects, like the model 3 generative android, or M3gan.

When Gemma’s sister and brother-in-law die in a car crash, she becomes guardian to their young daughter, Cady (Violet McGraw). Overwhelmed by sudden parenthood, she decides to offload some of her responsibilities to M3gan, who seems happy to pick up the slack. Gemma’s boss (Ronny Chieng) is also pleased, seeing in this new “toy” an untapped market worth billions. (M3gans won’t be cheap, coming in at somewhere north of a base-model Tesla.)

M3gan, with the body of young dancer Amie Donald and the voice of Jenna Davis, doesn’t appear right away, mind you. (“Little-girl shark from Jaws?”) The screenplay, from sci-fi/horror writer Akela Cooper, knows how to pace itself, and the audience at a recent preview screening was more than happy to follow along.

It also helps that, when M3gan starts to, um, act up, her first transgressions are ones the viewers can actually get behind. Terrible dog next door that bites Cady’s arm? He had it coming! Obnoxious potty-mouthed bully? No one liked him anyway. But we know it’s not going to stop there.

And the mood is not full-on horror, at least not all the time. The film knows how to elicit chuckles and guffaws from the audience, whether from M3gan unexpectedly crooning a lullaby to her young charge, or just tilting her head at an odd angle while talking. It’s unnerving, and director Gerard Johnstone leans into it while also never letting go of the inherent silliness of the plot. And without getting too college-term-paper about it, this is a great time for a wickedly cheesy film that speaks to our fears of artificial intelligence, after a year in which AI-crafted creative writing and art has been so much in the news.

Maybe even too great a time? Based solely on the success of early trailers, Blumhouse Productions is already considering a sequel (M4gan?) or perhaps a prequel – M2gan! If it comes to pass, I’d suggest releasing it in the same post-New-Year’s weekend. This killer robot movie might just give January a good name.