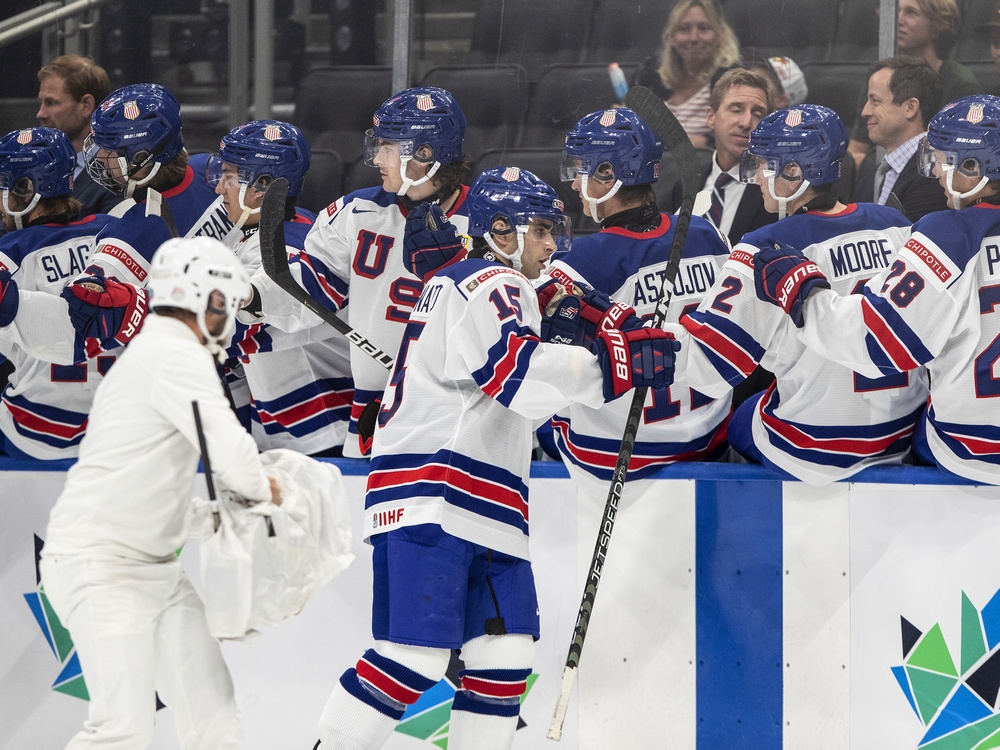 As a youngster, Matt Coronato would mostly spend his summer on the diamond. Second base was his specialty.

Now skating for Team USA at a rescheduled instalment of the IIHF World Junior Hockey Championship, his focus has turned to gold.

Coronato & Co. certainly have a good shot at it. Thanks in part to the offensive exploits of the Calgary Flames’ top forward prospect, the Americans hit for the cycle during round-robin action in Edmonton, earning the top seed in their pool with a perfect record. They will open the won-or-done portion with Wednesday’s quarterfinal matchup against Czechia (8:30 p.m. MT, TSN4).

“A gold medal is definitely the goal. That’s why everyone is so excited, just the chance of doing that, of that end result,” Coronato said before the puck dropped on this do-over edition of the world junior showdown, typically a staple in the holiday season. “We have guys on this team who’ve done it, who won it in 2021, so I think we have a lot of experience. That would mean definitely a ton to me, so I’m really hoping we can get out there and play our best, because we’re all excited and hopeful that can be the result.”

Flames fans are hopeful their favourite team hit a home run when they selected Coronato — or ‘Scoronato,’ as some refer to this emerging sharpshooter — at No. 13 overall in the 2021 NHL Draft, and they must be impressed with his performance so far in Edmonton.

The 19-year-old right-winger from Greenlawn, N.Y., has been a go-to guy for the Americans.

He is tied for the team lead with four goals, including a pair of tallies in Sunday’s 3-2 victory over Sweden. His third-period roof-job — “That is a world-class release,” praised TSN analyst Mike Johnson during a replay — turned out to be the winner and he later nabbed player-of-the-game honours.

Coronato has also chipped in a pair of assists, has racked up 19 shots on net and is averaging 16 minutes of ice time per outing, third-highest among Team USA’s forward cast.

“For me, even with how exciting this moment is, I think you have to treat it like you’re on any other team — to just play your role and do whatever you can to help the team,” Coronato said prior to the tournament. “It’s definitely a big stage, but I think keeping the game simple and trusting your teammates and being a good teammate is always the most important.

“I hope I can be a guy that plays any role that’s needed, whether it be offensive, defensive, end-of-the-game … Just being a reliable player that can be trusted in all situations, that’s what I always strive to be.”

Coronato enters the world-junior knockout round on a four-game point streak and with snipes in three straight, although that’s not what sticks out most for Flames development coach Ray Edwards as he tracks the action.

“We know the offensive upside and we know how he shoots the puck, but to me it’s all the stuff that leads to that,” Edwards said. “He’s been excellent on the forecheck. He’s been hard on the puck. He’s been getting pucks back. He’s been able to keep the puck and hang onto the puck longer. One of the things we talked a lot about with Matthew over the course of the year was having the puck more. Because when he has it, he’s a dynamic player. So how do we get the puck more?

“He’s gotten stronger. He’s built his upper-body up so he’s able to win those battles on sticks and under sticks. He’s not a huge guy, but he’s stocky. He’s 185 lb. and 5-foot 10 or 5-foot 11, so he sort of has that same body type as Mang (Andrew Mangiapane), where he can be gritty and he can get into those areas that are tough to get into. Not everybody wants to go in there, but he’s a guy that doesn’t mind going in there. So a big thing for us was, ‘OK, you’re not afraid to go in there, but let’s get more results in terms of getting the puck back and how do you get the puck back against certain players and all those things.’ It’s really encouraging to see him be able to do that against the best players his age in the world. That’s been really nice to see.”

Coronato was in Calgary last month for his first development camp in the Flaming C.

He’ll soon be headed back to campus at Harvard University, looking to avoid the so-called ‘sophomore slump’ after he notched a team-high 18 goals and 36 points during his freshman campaign with the Crimson.

In between, he was thrilled to be squeezing in a makeup trip to Edmonton, stressing that after the tournament was started in late December but then postponed due to a COVID-19 outbreak, “we’re grateful that we were given the opportunity to come back and get another chance at doing this.”

Team USA’s boys of summer are so far making the most of it, rolling past Germany, Switzerland and Austria before sealing top spot in Group B by one-upping the Swedes in their preliminary-robin wrapper.

Starting with Wednesday’s quarterfinal, they need to string together three more wins to leave this summer shindig with gold medals around their necks.

Swing for the fences, kid.

“I always loved hockey the most,” Coronato clarified. “Baseball was always No. 2 for me. I liked baseball a lot, but I knew that hockey was my favourite.”

ICE CHIPS: Flames star forward Jonathan Huberdeau has pledged to donate his brain to medical research after his death. Concussion Legacy Foundation Canada/Project Enlist announced his commitment Monday, alongside 170 Canadian Armed Forces members and veterans. “As an NHL player, I’m very aware of the impact of traumatic brain injuries, concussions and the link to other mental health issues,” said Huberdeau, 29, in a press release. “I’m proud to support Canadian military veterans by pledging to donate my brain to Project Enlist and support research to improve the quality of life of all military personnel who so bravely and courageously served our country.”