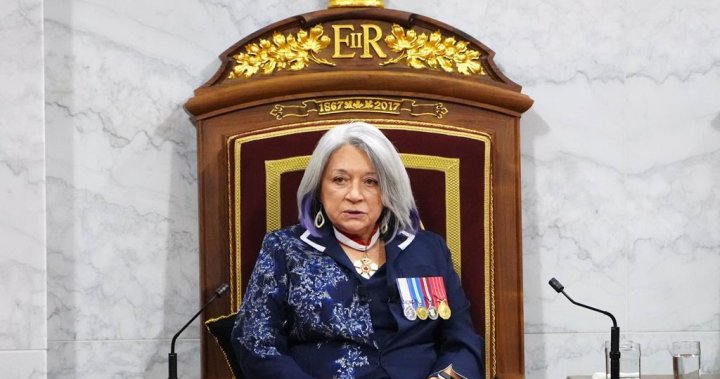 The $1.1-million price tag attached to Gov. Gen. Mary Simon‘s eight-day trip to the Middle East earlier this year is “similar” to costs of other high-level visits of this nature, MPs heard on Monday.

That’s according to chief of protocol of Canada Stewart Wheeler, the civil servant tasked with overseeing official, state and diplomatic visits at home and abroad, who made the comment during a House of Commons government operations and estimates committee meeting.

“I can reassure the committee that the overall cost … of this visit was in line with similar costs for high-level visits of this nature in the past,” Wheeler said.

However, he added, some “exorbitant costs” have been uncovered from Simon’s trip to the UAE, Qatar, and Kuwait to attend Expo 2020, which concluded in March 2022 — costs he said the government hopes “to bring down,” particularly when it comes to “catering.”

2:41
Freeland warns of tough times ahead in fall fiscal update


According to documents submitted to the committee, first reported by the National Post, Simon and her passengers ran up a roughly $80,000 tab for food costs during the trip.

“The costs of the catering were unacceptable,” Christine MacIntyre, the deputy secretary to the Governor General of Canada, told the committee.

She said she was “surprised” when she learned the total cost of the food from the trip.

“The (Office of the Secretary to the Governor General) has asked our partners from the Air Force and Global Affairs — who are responsible for this process and make decisions regarding menus and procurement — to do everything possible to find efficiencies in the costs that we can control.”

Simon has defended the expenses in public comments.

“I don’t even know what the orders are for meals. But I do know one thing — our meals are not very extravagant on these trips,” she said during a mid-October interview with CBC News.

“They’re pretty much like airline meals and the way they were portrayed in the media was pretty unfair, I thought.”

Wheeler said his office is looking for areas where catering costs could be cut going forward.

Part of the issue, he said, is that the government doesn’t actually know what the caterer is going to charge them for “final changes” because of “undue increases” caused by “the nature of some of those catering restrictions.”


He did not expand on what those restrictions were.

“We have decided as a policy that snacks will be minimal and soft drinks and snacks will be sourced in Canada, likely in Trenton, so that we can take advantage of bulk purchases here and store them on the aircraft, so that we’re not using catering services for those purchases,” he added.

“For example, things that would be normally part of standard international air travel, such as ice, drink garnishes, we’ll be looking at all of those costs as well. And certainly drink garnishes will be eliminated from service.”

These changes, Wheeler said, are already in the works “and are already producing savings.”