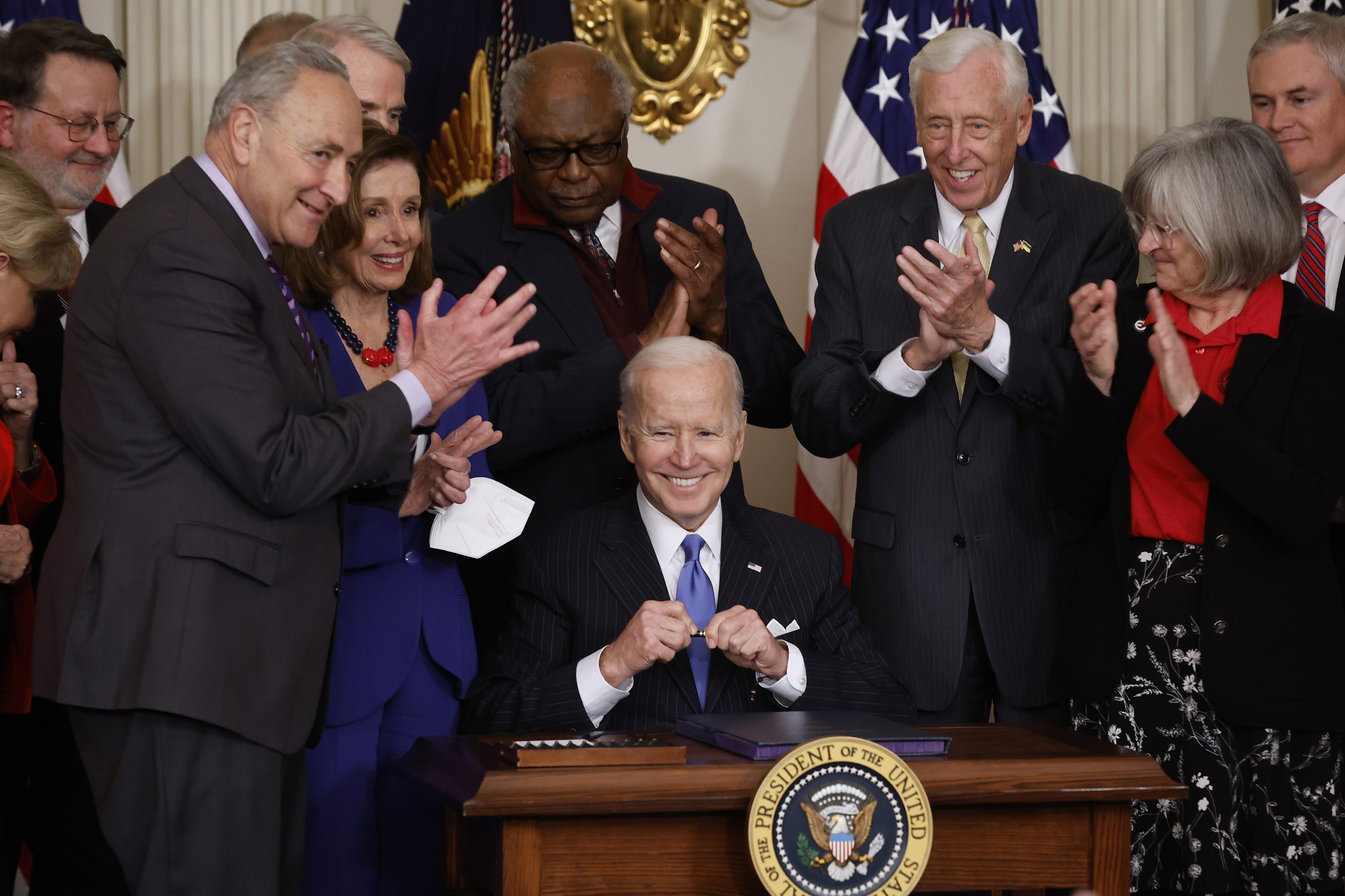 The House of Representatives voted 220-207 in favor of passing the Inflation Reduction Act, sending a slew of climate, health care and tax reforms to President Joe Biden‘s desk.

Predicted by Democrats to raise $737 billion in new tax and health care savings revenue, the bill aims to shave the national debt by over $300 billion while also investing $437 billion in efforts to combat climate change, support drought resiliency and extend the Affordable Care Act.

This measure was the product of months-long negotiations between Senate Majority Leader Charles Schumer of New York and Democratic Senator Joe Manchin of West Virginia.

In February, the Democrats’ effort to pass a larger version of the measure failed after Manchin pulled his support, calling the bill “dead,” leaving Democrats shy of the 50 votes needed to pass the bill through Congress‘ budget reconciliation process.

Manchin faced a litany of criticism by members of his party following his decision. However, upon letting time pass and resuming negotiations with Schumer, the senator became open to getting some version of the original agenda to the president’s desk.

“I worked with Senator Manchin and a number of environmental groups for over a year on this deal and the end result is the largest investment in climate in our nation’s history,” Democratic Congressman Ro Khanna of California told Newsweek. “I’m proud to vote yes today on the Inflation Reduction Act to create millions of new union jobs and prevent against the worst threats posed by the climate crisis.”

“Passing this bill is a major accomplishment, but it’s still just a down payment on the renewable energy moonshot we need,” Khanna continued. “It’s time to usher in a new era of climate action—one that prioritizes our planet and our people.”

Khanna, who serves as deputy whip for the Congressional Progressive Caucus, kept a line of communication open with Manchin while other progressives said that Manchin had not negotiated in “good faith.” Khanna was able to help change Manchin’s mind by speaking with him about potential upsides of investing in clean energy.

The $369 billion in the bill designated toward green energy represents the largest climate change investment in U.S. history. The funds will go toward bolstering domestic manufacturing of solar panels, wind turbines, batteries and critical minerals processing. It will also see the introduction of tax credits and loans that aim to reduce carbon emissions.

“The prospects for further clean energy development going into the following decade are even brighter because we’ll have this new manufacturing capacity, we’ll have irreversible trend towards zero emission vehicles, and we’ll be demonstrating to the rest of the world solutions that will work over there also,” Trevor Higgins, vice president of climate policy at the Center for American Progress, told Newsweek shortly after the Senate’s passage of the bill.

Democrats say the climate spending will be funded in part by a provision that will allow Medicare to negotiate the price it pays for drugs acquired through the Affordable Care Act. The change will reportedly save $265 billion, the party said.

There is also an additional $222 billion in revenue that the party said will come through a 15 percent minimum tax on corporations. Democrats expect another $124 billion will be raised through increased IRS tax enforcement.

That provision of the bill has been met with heavy scrutiny from Republicans who said the bill will see the hiring of 87,000 new IRS agents. Democratic Representative John Yarmuth of Kentucky, who chairs the House Budget Committee, said during debates on the bill that the claim is inaccurate.

Nonetheless, Republicans remain staunchly opposed to the measure, insisting it will drive up energy prices, not reduce inflation, and raise taxes on average Americans.

“I believe [this is] the largest tone-deaf bill I’ve ever seen in this chamber in 232 years,” House Minority Leader Kevin McCarthy said during a speech on the floor. “Democrats more than any majority in history are addicted to spending other people’s money, regardless of what we as a country can afford.”