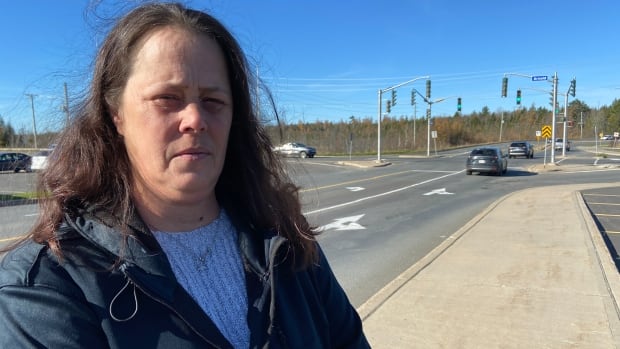 Pam Staples-Wilkinson has never consumed cannabis in her life.

Yet, in March 2021, the New Brunswick woman found herself trying to convince a Fredericton police officer she was not high when she got into a car accident near Regent Mall just minutes earlier.

Const. Garret Fancy didn’t believe her. He hand-cuffed her and took her to the station on Queen Street.

She would spend the next two hours being questioned and subjected to a 12-step test officers use on people they suspect of being under the influence of a drug while driving.

She left the station that night not being allowed to drive for the next seven days, and with a promise to appear in court to answer to an impaired driving charge.

For the next nine months, Staples-Wilkinson would live in an anxious state of limbo until a negative drug test result ultimately cleared her name.

This summer, Staples-Wilkinson received a written apology from former police chief Roger Brown, who assured her Fancy would be put on probation and required to be retrained.

However, she said the experience has shaken her faith in the police and damaged her mental health.

“It was mentally stressing ’cause I still didn’t know how I went from a simple car accident to being charged for drugs,” Staples-Wilkinson said.

“I had to go on medication ’cause I wasn’t sleeping properly or even coming close to it. It was constantly on my mind.”

An accident, an accusation

It was about 4 p.m. on March 16, 2021 and Staples-Wilkinson had just left the restaurant where she works.

She was driving north on Arnold Drive toward the Vanier Highway, when someone coming from the opposite direction made a left turn just as she was going through the Bishop Drive intersection.

She said the front of her car hit the passenger side of the other car, leaving her shaken, and with symptoms of a concussion.

She got out of her car to check on the other driver before calling 911.

Stressed and in a panic, she mistakenly told the dispatcher the Pontiac G5 she was driving was a “Pontiac Elantra,” confusing the name of the model with another car she normally drives.

She would later find out from police records that the dispatcher told Fancy, the first officer on scene, that she “sounded impaired.”

Staples-Wilkinson said when Fancy arrived, she expected to give a statement, sort out the insurance, and get medically examined. Instead, within minutes of him arriving, she said he began questioning her about whether she was under the influence of drugs or alcohol.

He finally ordered her to take a standard field sobriety test (SFST), a practice formally adopted by police officers in Canada in 2008.

The three-step test is typically performed by police during roadside traffic stops, and involves a walk and turn, a one-leg stand, and an eye test that involves following an object side to side, according to Public Safety Canada.

Staples-Wilkinson said the test ended with Fancy telling her she’d failed, him handcuffing her, putting her in the back of his cruiser and taking her to the station on Queen Street.

“I was actually floored ’cause I didn’t understand how he automatically went to me being impaired ’cause he barely spoke to me,” she said.

“He was here for like two minutes and he automatically assumed I was under the influence of something. Everybody acts different in a car accident.”

‘They kept hounding me’

Down at the station, Staples-Wilkinson said her experience only got worse.

She said Fancy brought in another officer, Const. Dylan Howell, who served as a drug recognition expert.

She said the two officers took her to the station’s shooting range in the basement.

“They took me in and did all the tests and asked me why I was shaking, and I said ‘Well it’s cold in here. You’re in a cement block room on the coldest day in March and I’m basically in an undershirt and work shirt.’

“And they kept hounding me. ‘What did you smoke? What edibles have you eaten?’ They said to me, ‘You are under the influence of drugs and you will be charged.'”

Staples-Wilkinson said she was then ordered to give a urine sample to be tested for drugs.

She said officers then told her she’d have to return to the station in a few weeks to submit fingerprints, and they issued her a promise to appear in court to face the impaired driving charge.

For the next seven days, she had to rely on friends and family to drive her to work and to run errands.

She also had to retain a lawyer, which she didn’t ultimately need.

She said she later found out police never filed documents with the Crown prosecutor, and when the results of the urine test came back last December as negative, the matter was dropped entirely.

An investigation, an apology

After nine months of worrying what would happen to her, Staples-Wilkinson said the results brought relief, but also anger for what she’d been put through.

Farrah, in his report dated June 8, said Fancy was “neglectful in his duties” and abused his authority in violation of the Police Act. He said Fancy specifically failed to properly follow his SFST training, and didn’t properly complete the SFST report.

Fancy also “failed to consider the totality of the situation” when he assessed Staples-Wilkinson’s sobriety, Farrah wrote. As a result, “Fancy should not have arrested the complainant based solely on his observations and conclusions.”

Farrah also found that Howell neglected his duty when he failed to have a female officer present for the drug recognition evaluation.

On July 7, Brown wrote to Staples-Wilkinson to apologize and inform her of the disciplinary action against Fancy.

Brown said he directed Fancy to undergo supplementary training in the area of standardized field sobriety testing, and be placed on a six-month probationary period where “all his interactions in regards to these types of files be evaluated by a supervisor.”

“Policing in general is not an easy profession, however, we are put in positions whereby the public must trust us,” Brown wrote.

For Staples-Wilkinson, that trust has been broken.

“I hold my breath every time they drive by me,” she said.

“I shouldn’t fear the city police, and I do. Literally I fear them. I shouldn’t have to, but because of what happened I have no faith in them. I don’t trust them.”

CBC News asked the Fredericton Police Force for an interview about the case. A spokesperson said it was already handled by the commission and is now closed.

“We cannot offer further comment and will not be doing an interview on the matter,” Sonya Gilks said in an email.