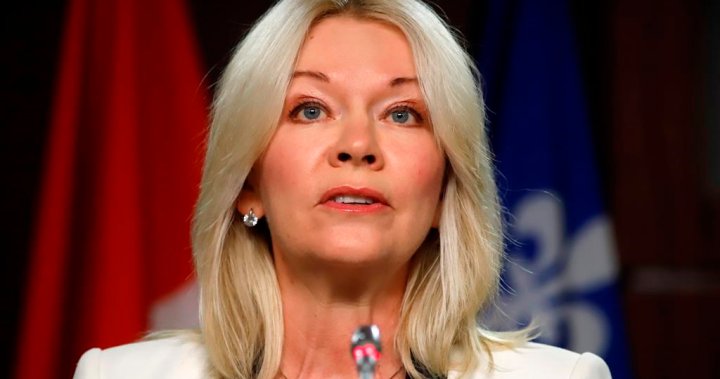 Interim Conservative leader Candice Bergen will not run in the next federal election.

“With deep gratitude as a Manitoban and Canadian, I am announcing today I will not be seeking re-election in the next general election,” she wrote in the statement.

“Serving the constituents of Portage–Lisgar for fourteen years has been the honour of my political life and I am eternally grateful to have had the opportunity to be their voice in the House of Commons.”

Poilievre popular among Conservative voters, but not all Canadians feel the same, poll finds

Bergen, who became interim leader of the party in February of this year after then-leader Erin O’Toole was ousted by his own caucus, said she will continue to serve as a member of Parliament.

“I will wholeheartedly be supporting whoever takes my place as Leader after September 10th,” Bergen said in the statement.

The date of the next federal election is unclear, but the Liberals and NDP have struck a deal that – if honoured – will allow the current government to stay in power until 2025.

3:35
Pierre Poilievre favoured within Conservative party, but not among Canadians, new poll says

Pierre Poilievre favoured within Conservative party, but not among Canadians, new poll says

During her 14-year tenure in parliament, she held roles as minister of state for social development as well as parliamentary secretary to the public safety minister.

In opposition, Bergen served as Conservative House leader for nearly four years. O’Toole appointed her deputy leader in 2020. She took over as interim leader less than two years later.

As Bergen prepares to pass the leadership torch to the next Conservative leader, a new Ipsos poll suggests leadership candidate Pierre Poilievre is favoured to win. He’ll face off against Jean Charest at a Conservative Party convention this Saturday, where the new leader will be crowned.