Is safe supply for opioid use effective? Here’s what the experts, data say – National | Globalnews.ca 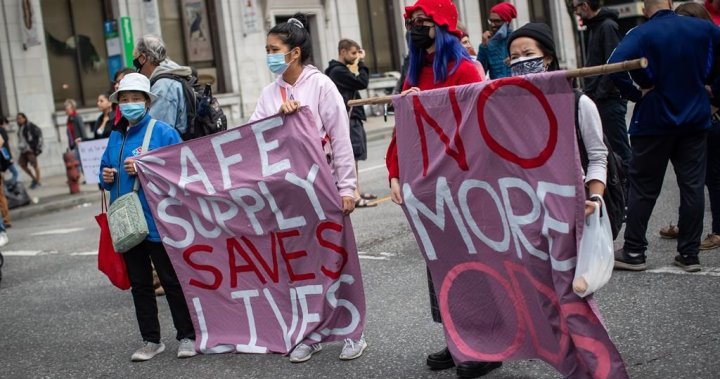 Front-line workers of Canada’s opioid crisis say harm reduction approaches like safe supplies for those navigating substance use are clear even amid renewed political debate around the issue.

Debate around safe supply recently reignited after Conservative Party Leader Pierre Poilievre posted a video to his Twitter account saying initiatives like safe consumption sites and offering a safer supply of drugs to people in the throes of addiction “will only lead to their ultimate deaths.”

Global News spoke to experts who have been working on the frontlines of the opioid crisis to hear their experiences, and those who weighed in voiced concerns. A growing body of data, experts suggested, indicates initiatives like safe supply and harm reduction actually decrease overdose deaths and hospitalizations and help connect people to more health care and treatment options.

“To describe safe supply as causing homelessness, as causing an increase in crime is really just the opposite of what we’re seeing from the research itself,” said Mish Waraksa, clinical lead for the Parkdale Queen West Safer Opioid Supply Program in Toronto.

Here’s what the data and experts say about the effectiveness of safe supply.

It shows Poilievre in the foreground, pointing behind him to a collection of tents along a shoreline in Vancouver, B.C., saying the people in the tents are “hopelessly addicted to drugs, putting poisons in their bodies.”

“The addictions that we see, that have terrorized these people and our communities, they are the result of a failed experiment,” Poilievre says in the video.

“This is a deliberate policy by woke Liberal and NDP governments to provide taxpayer-funded drugs, flood our streets with easy access to these poisons.”

The video drew criticism from many in Canada’s political realm, including a former adviser to former Conservative prime minister Stephen Harper, Ben Perrin, who said it reflected “tropes that have long been discredited.”

“Using (people living in tents) as props to peddle his snake oil was disgraceful,” Bennett said at a House of Commons committee meeting on Nov. 29, stressing that all federally-funded harm reduction initiatives are rooted in evidence-based outcomes.

“This is about creating a community of compassion… this is about the toxic drug supply, but (also) it’s understanding addiction.”

A request for comment from Poilievre for this story went unanswered.

Looking at the data on opioid deaths does paint a grim picture of the fatal and growing toll the opioid crisis is having on Canadians.

A total of 29,052 Canadians have died due to opioids since 2016, according to the latest federal data released in June.

While these statistics are sobering, there is also data to suggest some harm reduction measures that have been implemented are saving lives.

For example, supervised consumption sites across the country received almost 2.2 million visits between 2017 and 2020, where nearly 17,400 overdoses were reversed without a single death at a site, federal data shows.


These visits also led to approximately 84,400 referrals to health and social services.

And when it comes to safer supply programs, where patients are given access to prescriptions of pharmaceutical-grade opioids, some recent studies have also shown positive outcomes.

A review of 10 federally-funded safer supply pilot projects in three provinces, commissioned by Health Canada and released earlier this year, cited participants reporting improvements in their lives and well-being.

Clients said having access to a safer supply of drugs saved their lives, created more stability, allowed them to become housed and employed and gave them hope for their future.

Another independent study published in September in the Canadian Medical Association Journal (CMAJ) found safe opioid supply programs can significantly cut down on emergency department visits and hospitalizations for people at high risk for overdose.

That study looked at individuals who used a safer supply program in London, Ont., for three years, and found ER visits and hospital admissions declined one year after participants entered the program.

It also found no increased risk of infections or overdoses and a decline in health-care costs unrelated to primary care or outpatient medications after a year.

In addition, there were no opioid-related deaths among those who were part of this program.

Why are opioid deaths still rising?

The biggest driver of the overdose crisis in Canada since 2016 is the contamination of the street drug supply with more potent drugs like fentanyl, says Cheyanne Johnson, executive director at the B.C. Center on Substance Use.

But this has also shifted over time, notably accelerating as a problem during the pandemic, when closed borders and suspended treatment programs caused even more contamination and overdoses, she said.

For example, preliminary data for 2022 released by the B.C. Coroner’s Service has found that fentanyl or related drugs have been detected in 81 per cent of all illicit drug toxicity deaths in that province.

While Poilievre contrasted statistics on opioid use against data from before 2015, which is when the Liberals won government, Johnson said the spread of fentanyl has changed the realities on the ground.

“It’s very difficult to compare pre-2015 levels of overdose to what’s happening now because the supply chain has totally changed,” she said.

Blaming harm reduction programs that have reversed overdoses and that provide access to drugs that are not “poisoned” shows a misunderstanding of the realities of this crisis, said Rob Boyd, CEO of Ottawa Inner City Health, which runs a safer supply program and other harm reduction initiatives.

Virtually any front-line worker who supports programs for drug users would agree with Poilievre that more funding is needed for detox and in-patient rehabilitation treatment programs, he said.

But it doesn’t have to be a binary choice of “either” treatment programs “or” harm reduction initiatives like safer supply, he said.

Low-barrier programs that don’t require complete abstinence have proven effective at helping people who may not otherwise be able to receive help, Boyd said.

“That is too high a threshold for somebody who is injecting fentanyl five or six times a day. We have to be able to start conceptualizing treatment, starting where people are at,” he said.

“In some cases, safer supply can be a treatment for somebody because it brings them a little bit of stability in that moment or in that day in their lives.”

Since most safer supply pilot programs across Canada have wraparound supports, such as housing, health and social supports, clients who regularly receive non-toxic drugs can gradually increase their capacity and motivation for change, he said.

Waraksa echoed this, saying safer supply “keeps people alive until they are able to access other forms of treatment.”

Overall, Johnson says she finds it “disheartening” to see the opioid crisis being politicized.

“It really further stigmatizes them and creates more shame around substance use.”