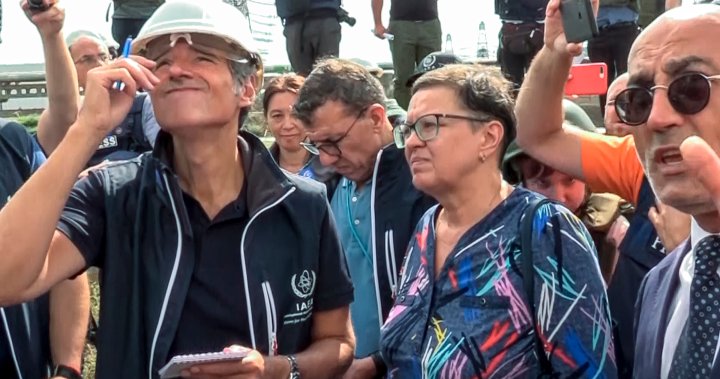 Fighting is intensifying in the region that hosts Ukraine’s Zaporizhzhia nuclear power plant, a trend that has the UN’s chief nuclear inspector worried about possible collateral damage.

The International Atomic Energy Agency (IAEA) completed an initial inspection of the nuclear plant on Friday, in which the inspectors said they witnessed “impact holes” and markings on buildings from shelling related to the war in Ukraine waged by Russia.

IAEA Director-General Rafael Mariano Grossi told reporters Friday after leaving the war zone that it was clear the physical integrity of some buildings had been “violated” several times.

“The kinetic power of what you’re throwing at the plant is unacceptable,” he said.

Then, there is the off-site power supply that helps keep the reactors cool to avoid a Chernobyl-esque meltdown, units that Grossi said are an area of enormous concern.

The inspection was meant to gauge the impact of the war on the nuclear power plant after a fire broke out in its vicinity in March when it was seized by the Russians.

However, Grossi said shelling in the area is actually a more recent trend that began in August.

“Military operations are increasing in that region,” he said. “This worries me a lot.”

Both Russia and Ukraine have traded accusations that each other are shelling the plant, with Russian Defence Minister Sergei Shoigu saying it raises the risk of a nuclear catastrophe.

One of the plant’s reactors was forced to shut down on Thursday due to shelling.

In an effort to promote stability at the plant, two UN nuclear specialists will stay there permanently to keep eye on the present dangers, and a report should be available early next week, according to Grossi.

He said that during the tour, no details were obscured to sway the final assessment, although Ukraine’s state nuclear company Energoatom argued otherwise.

The company said the UN watchdog had not been allowed to enter the plant’s crisis centre where Russian troops are allegedly stationed, and said that a partial look at the plant does not allow for an impartial assessment.

Grossi, though, was satisfied with the level of inspection.

“We saw everything,” he said.