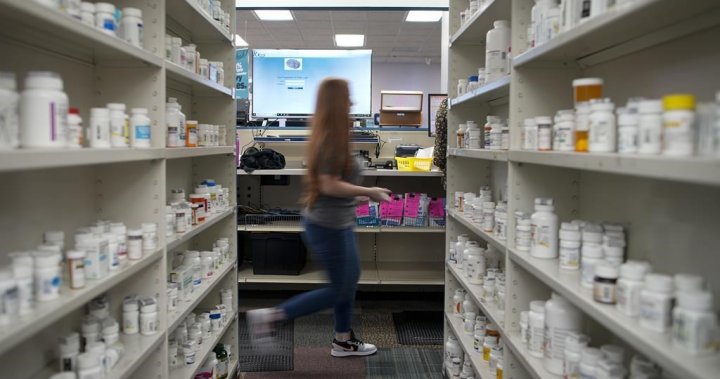 Around Christmastime, Wendle Beaton was trying to find cold medication for her adult son in Brampton, Ont.

“In my neighbourhood there’s like 20 (pharmacies) within like a two-kilometre radius because I live in the most populous part of the city,” Beaton said.

The 55-year-old artist went to three stores before finding something. Even then, “they were out of a whole bunch of stuff.”

Now, visiting family in Smiths Falls, Ont., the same thing happened again when her 23-year-old niece needed medication _ except this time, they had to drive more than half an hour to Brockville, Ont., to find it.

‘Nothing is available’: Pharmacies experiencing shortage of adult cold and flu medication

A mucosal vaccine could be a COVID-19 game-changer. So why doesn’t Canada have one?

That’s true, pharmacists say, and the bare shelves suggest there are vulnerabilities in Canada’s drug supply system. People across the country are struggling to find adult cold, cough and flu medications, right on the heels of a children’s fever and pain medication shortage that still hasn’t been fully resolved.

“I think this is a bit of a wake-up call,” said Joelle Walker, vice-president of public and professional affairs at the Canadian Pharmacists Association.

In December, the association informally polled pharmacists across Canada and found there was “still some strain” on the supply of pediatric pain and fever drugs, even after the federal government imported more to help ease the shortage.

Many pharmacists reported being either completely out of adult cold and flu medications or had “minimal supply.”


There haven’t been any identified issues on the manufacturing end that would account for these shortages, said Mina Tadrous, an assistant professor of pharmacy at the University of Toronto who specializes in drug policy and surveillance of medications.

Both Tadrous and Walker said the issue seems to be enormous demand as more and more people get sick during a brutal respiratory illness season.

The situation is worsened by panic buying and stockpiling as people worry about the shortages.

“I’m not sure we ever expected an over-the-counter medication to be (in) quite such tight supply,” Walker said.

But despite the extraordinary demand, these aren’t Canada’s first drug shortages, she said _ and they reveal a deeper problem with how the country manages its drug supply.

“Time and time again … we have a shortage that happens. We all scramble to deal with it and then we sort of move on,” Walker said.

“What we’d like to see is a more comprehensive action plan to deal with preventing shortages from happening.”

“Part of this is creating an environment where not only are manufacturers willing to invest in domestic production here, but are willing to bring their products to the (Canadian) market,” she said.


In addition, the federal government needs to invest in developing a “critical list of medications,” which Walker said would identify the drugs that are most important for Canadians and what the risks of shortages are. Those risks could include being dependent on only one or two manufacturers for a given medication.

Such a list would allow the government to take actions such as bolstering domestic production or working with other countries that produce those drugs, Tadrous said.

In addition, Canada needs to improve the data it has about drug supplies so it can react more quickly to shortages, rather than waiting “until the shelves are empty,” he added.

Unfortunately, Tadrous said, it’s unrealistic to think there will ever be a time with zero drug shortages.

“But I think the number of shortages that occur is unacceptable and I think we could be doing better.”

Are expired medications safe to consume? Here’s what experts say

The “silver lining” of the COVID-19 pandemic was that it showed how quickly Health Canada can act in importing medications, he said.

In an emailed statement to The Canadian Press on Friday, the office of federal Minister of Health Jean-Yves Duclos said they are “aware of the situation regarding adult cold and flu medication.”

“We are closely monitoring the situation as it is evolving quickly,” the statement said. “Our office and Health Canada are already in discussion with manufacturers here in Canada and abroad.”