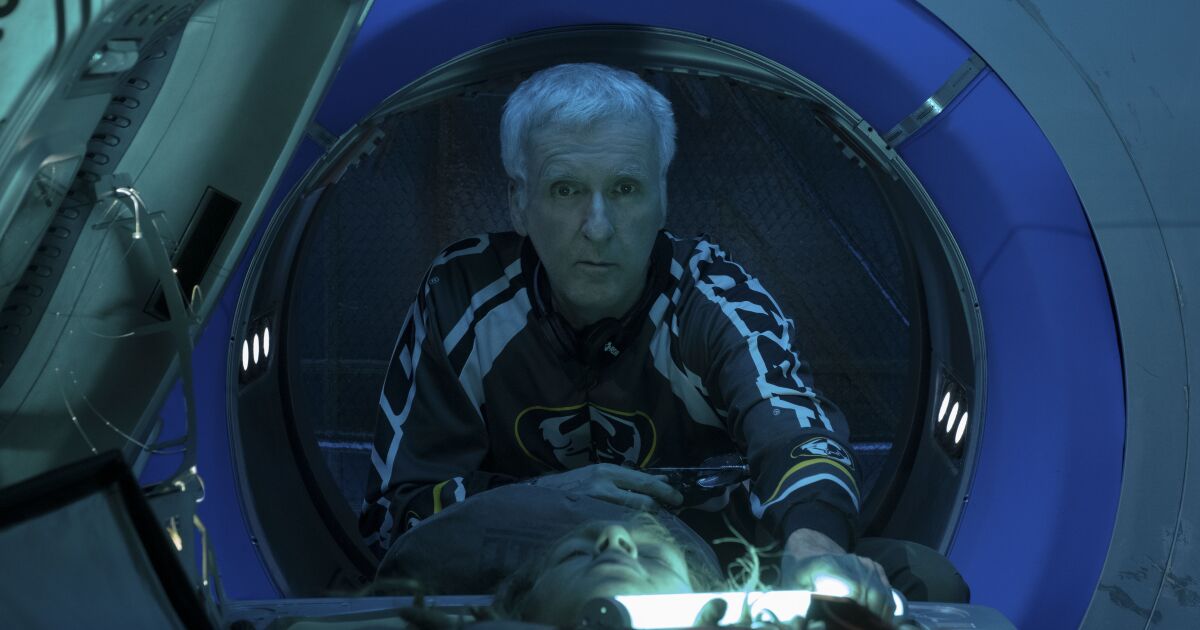 Over budget and behind schedule, “Titanic” was doomed to fail, so said Hollywood soothsayers. Instead, the James Cameron classic won 11 Oscars and smashed box office records, bringing in a whopping $2.2 billion — the highest-grossing film to date in 1997. “Avatar,” a long-simmering project, was released in 2009 and set a new global record, earning roughly $2.9 billion. The director said its sequel, “Avatar: The Way of Water,” would have to return $2 billion just to break even. Well, it did.

Cameron has been defying naysayers and pioneering new filmmaking techniques for over 30 years. Now, at what would be retirement age for many, he’s hitting the after jets, gearing up for three more “Avatar” sequels and a project close to his heart, “The Last Train From Hiroshima: The Survivors Look Back.”

The good news is “Avatar 3” is already in the can and reportedly ventures into a land of fire. It’s actually the second half of the new movie, which was broken into two parts. The bad news is postproduction takes roughly two years, which means it won’t be in theaters until 2024 at the earliest. It features a more prominent role for Ronal, chieftess of the Metkayina, played by Kate Winslet, the “Titanic” star who reunited with Cameron after once saying, “You’d have to pay me a lot of money to work with Jim again.”

“She talks about how she almost gets traumatized by the characters she plays. She was talking about something recently and I said, ‘Y’know, that happened on “Titanic.” You were carrying the responsibility and the burden of that film on your shoulders,’” Cameron recalls, noting he’s the only director Winslet’s worked with twice. “There were no sparks [of anger] between us when we were working. It was a fantastic experience.”

Sigourney Weaver has Winslet beat, reuniting with the director for the third time in “Way of Water,” where she briefly reprises her role of scientist Grace Augustine but mainly plays her half-Na’vi daughter, Kiri, a soulful adolescent who has a way with sea creatures. It’s a challenge the 73-year-old actor had never been confronted with.

“She’s not a method actor, but she basically just stayed in a light and young frame of mind,” Cameron says of Weaver, who prepared for the role by hanging out with teens. “When she stepped into the Volume [a sort of wall-to-wall green-screen set] every day, even between takes, she had a bit of Kiri about her at all times. And she was tons of fun on the set ’cause she just stayed in that buoyant state.”

With state-of-the-art technology and cutting-edge performance capture, the “Avatar” movies appear to challenge actors in ways that have nothing to do with acting. Instead, the opposite is true. On a mostly bare stage without makeup or costumes, the art of acting is reduced to its purest rudimentary state.

“Actors come in and don’t know what to expect but quickly recognize what they need to do, and how easy it is. They’re getting into a more tightly linked groove with me and with each other, because we’re not constantly resetting lights and moving the camera,” Cameron says of a process he claims is 95% focused on performance. “You mock up the set. There’s nothing there, a table or a few marks on the ground. We make sure anything you touch, a doorway, a tree branch, anything you move on, it has to be physically there.”

First there’s the performance capture, which is shot simultaneously with reference footage for the editors. And don’t forget the Fusion camera, a state-of-the-art 3D rig. Next take the whole production and dunk it in the drink, then you begin to understand how “Avatar: The Way of Water” came to be. Cameron can tell you how he did it, but it would take 10 hours and your eyes would glaze over at some point. So instead, he tells you why he did it.

“It creates a form of cinema that doesn’t look like anything else,” he says. “It has an almost photoreal quality, and yet it’s fantastical in that the characters can’t possibly be real. We specifically designed them to not be possible with makeup. That was a creative priority. Their eyes are too big — they’re four times the size of human eyes, and it gives them that deeply empathetic kind of effect I think the audience responds to. Their sinuous bodies that are integrated with the tail movement and ear movement, they become these highly expressive versions of the actor that are in a way more emotive and, in a funny way, almost more emotionally accessible to the audience.”

While neither “Avatar” film is explicitly about climate change, both are strong statements on conservation and the current epoch of human impact on the Earth, called by some the Anthropocene. For Cameron, such ideas constitute the reason for making the movies, which is why he nearly walked out when Fox execs asked him to drop environmental themes from the first film.

“It’s part of our dialogue, part of our discourse to discuss our ideas and problems through our art,” offers Cameron. “And movies are part of our art. It’s what drives me to want to make these films.”

No doubt sequels Nos. 3 through 5 will delve deeply into these concerns, shared by prolific writer-producer Shane Salerno, who has a story credit on all of the sequels and a screenplay credit on the fifth. “Shane’s got a lot of energy, a lot of positive energy. He’s relentless,” Cameron says about the author who is writing an update of “Fantastic Voyage” to be produced by Cameron and directed by Guillermo del Toro.

While “A3” is topmost in mind for the filmmaker, he hopes to take time before “Avatar 4” to direct a pet project, “The Last Train From Hiroshima: The Survivors Look Back,” based on the book by author Charles R. Pellegrino. Research included an interview with the late Tsutomu Yamaguchi, the only known survivor of both the Hiroshima and Nagasaki bombings.

“We live in a more precarious world than we thought we did,” says Cameron, reflecting on the war in Ukraine and resurgent nationalism. “I think the Hiroshima film would be as timely as ever, if not more so. It reminds people what these weapons really do when they’re used against human targets.”

Like “Avatar: The Way of Water,” the Hiroshima film seems meant to be experienced on the big screen. In fact, all Cameron films should be viewed that way. “Enough of the streaming already,” he told the Independent at the Golden Globes. “I’m tired of sitting on my ass.”

“I don’t think it’s ever going to go away, ’cause it’s something specific,” he says of the moviegoing experience. “The deal we make to go and immerse ourselves without distraction, it’s like doing yoga or taking a walk in the forest for a couple of hours. There’s something about it I still think is sacred.”

That’s why you won’t see “Avatar” spinoffs on Disney+ anytime soon, not to mention the price tag. “Right now, the economics don’t make sense to spin off any of our CG main characters onto TV. But the cost of these things will progressively come down as we introduce machine deep learning into the processes and make them more automated. Ask me again in five years.”

Despite the sequel’s technological innovation and vertiginous box office returns, critics and awards voters are reluctant to heap too much praise onto “Avatar: The Way of Water.” Failing to make the BAFTA longlist for best film, it was shut out at the Golden Globes after receiving only two nominations.

“I’ve asked myself, why do this form of cinema that’s so difficult? Some people think it’s a lesser form of cinema because it doesn’t involve a camera. I could argue that till I’m — to coin a phrase — blue in the face, because I think it’s a much more pure form for acting in the cinema. But it’s really about creating a waking dream state on the part of the audience.”