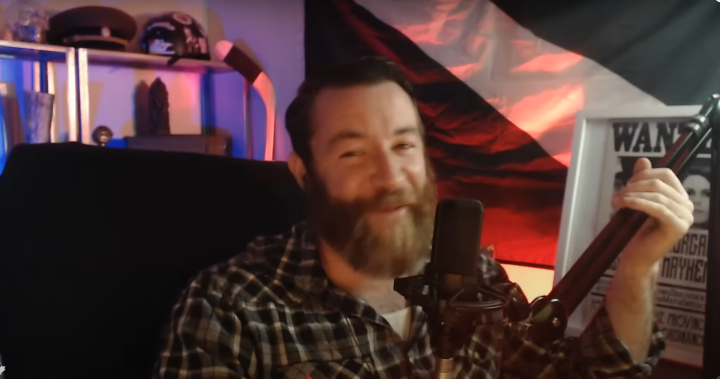 Jeremy Mackenzie, a far-right livestreamer and founder of the de-facto group “Diagolon,” has been arrested on a Canada-wide warrant, Saskatchewan and Nova Scotia RCMP have confirmed to Global News.

Mackenzie made headlines this week after he allegedly made a joke about sexually assaulting Conservative Leader Pierre Poilievre’s wife, Anaida Poilievre, and his livestreams have faced close scrutiny by extremism researchers — some of whom have raised the alarm about the content.

However, his arrest is unrelated to either of those issues. Mackenzie was arrested on Wednesday after a Saskatchewan warrant was made Canada-wide, the province’s RCMP told Global News.

The warrant was related to charges laid against Mackenzie on July 18 for assault, pointing a firearm, using a restricted weapon in a careless manner and mischief.

The Nova Scotia RCMP said Mackenzie was arrested in the early afternoon on Wednesday in Cole Harbour, N.S., in relation to this Canada-wide warrant.

“The arrest warrant is related to charges laid by the Saskatchewan RCMP. MacKenzie will be remanded into custody as part of the court process related to his arrest warrant,” Nova Scotia RCMP told Global News in a a statement.

“Court details will be provided by the Saskatchewan RCMP once they are available.”

The latest arrest is not Mackenzie’s first brush with the law.

The Nova Scotia resident was charged with intimidation of a health professional, criminal harassment, mischief and with making harassing phone calls following an anti-mask protest outside of the home of the province’s chief medical officer this past March. He is also facing 13 firearms-related charges in an unrelated incident in the province.

0:58
Poilievre marches at head of convoy protesters alongside man who appeared on far-right podcast

Poilievre marches at head of convoy protesters alongside man who appeared on far-right podcast – Jun 30, 2022

Mackenzie has a sizeable following on social media and regularly livestreams under the moniker “Raging Dissident” for hours at a time across multiple platforms.

His Telegram channel has more than 14,000 members, and he had at least 10,000 subscribers on YouTube before his channel was removed in early September. Mackenzie has since made a new YouTube channel, which has already amassed at least 1,000 subscribers.

In these streams, Mackenzie often expresses his deep distrust in political institutions and hints at a societal collapse he believes the political elite have Canada careening towards.

Diagolon: What to know about the group whose founder shook Pierre Poilievre’s hand

But after a patch bearing what is believed to be Diagolon’s insignia was found alongside weapons seized by the RCMP near the border in Coutts, Alta., in February, some extremism experts say they are concerned about what Mackenzie and his friends’ multi-hour livestreams could inspire their viewers to do.

“I don’t get the sense that they know what they want to do next … There’s this kind of constant reveling in the grievance itself. But there’s no real ask,” said Amarnath Amarasingam, an assistant professor at Queen’s University and expert on extremism, in an interview with Global News in July.

“That’s not to say particular individuals and this movement won’t take it upon themselves to do it — as we (allegedly) saw in Coutts.”

Mackenzie denies that the patches are affiliated with his group. A post on a website dedicated to Diagolon suggests the patches are fake and being “used to frame community members.”

He has also pushed back on concerns that his livestreams could incite followers to acts of aggression.

1:56
Ottawa pulls funding to Montreal-based nonprofit over tweets by consultant

The goal of his podcast, Mackenzie told Global News in an email in late July, is to “make people laugh and alleviate their stress, build a sense of community to combat the social and spiritual isolation prevalent through society, make it abundantly clear that these incredibly wealthy and powerful folks pushing the buttons in our home are not to be blindly trusted without a thought.”

However, Mackenzie recently found himself in some hot water over comments he appears to have made during a livestream with friends.

Earlier this week, a clip emerged of a livestream Mackenzie is believed to have participated in alongside Alex Vriend, another Diagolon livestreamer who uses the pseudonym The Ferryman’s Toll.

In the video, a social media account of “Jeremy Mackenzie” can be seen lighting up as the speaker before a man can be heard talking about Anaida Poilievre as he and co-hosts debate her ethnic background, before he goes on to say: “let’s rape her.”

“It’s not really a sex thing, we just want to show people we can do things to you if we want to,” he adds.

Global News attempted to contact Mackenzie on Monday about the threats allegedly made against Anaida Poilievre. No response has been received.

However, the comment prompted Poilievre to released a statement about Mackenzie, saying he had been made aware of “disgusting comments made by Jeremy McKenzie and another man, where they discuss sexually assaulting my wife.”

He called the men “odious” and “losers,” and added he has reported the comments to police.

The Canadian Press reported Monday afternoon that in an interview with Mackenzie, he said he was drinking when he made the comments and nobody meant any harm by it.

His arrest on Wednesday was unrelated to this incident, RCMP confirmed.

Supporters of Diagolon — and Mackenzie himself — have also participated in an ongoing torrent of abuse against female Canadian journalists who cover the far-right.

“You deserve worse and with the trajectory you’re on, you’ll get it,” Mackenzie tweeted on Aug. 12 about the onslaught of threats against female journalists covering the far-right.

He also urged his thousands of followers: “Hate them as hard as you can.”

His account was suspended shortly after and remains shut down.

How close is too close to the far-right? Why some experts are worried about Canada’s MPs

A report from Press Progress published a document it obtained through access-to-information from the Integrated Terrorism Assessment Centre, a federal organization that assesses threats of terrorism to Canada.

The document, dated Feb. 17, 2022, classifies Mackenzie as one of the “key anti-government IMVE (ideologically motivated violent extremism) adherents” that attended the so-called “freedom convoy” protests in Ottawa earlier this year.

The Canadian government has not expressed formal concern about Diagolon nor does it list the group as a terrorist entity.