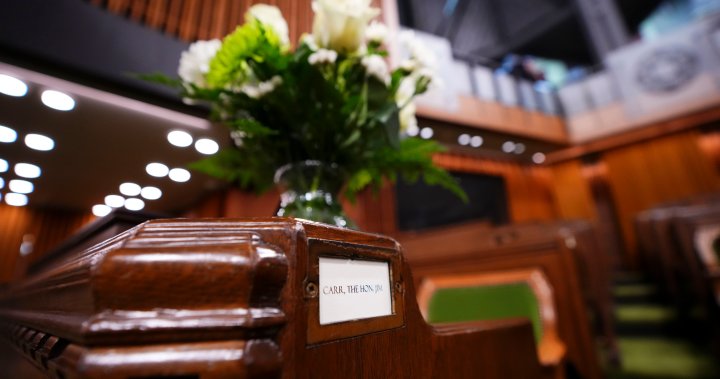 Winnipeg MP Jim Carr brought his “reliable Prairie pragmatism to the cabinet table” and inspired Justin Trudeau to do “difficult things in difficult moments,” the prime minister said at the Manitoba politician’s memorial service on Saturday.

Carr, who died on Dec. 12 at the age of 71, represented the federal riding of Winnipeg South Centre since 2015.

He had been fighting multiple myeloma that also affected his kidneys, according to a statement released by his family. Carr had been receiving dialysis treatments, chemotherapy and he also went through a bone marrow transplant.

Carr was formerly the minister of natural resources and minister of international trade diversification between 2015 and 2019. In 2021, he served as the special representative for the Prairies in Trudeau’s government.

He was first elected to the Manitoba legislature in 1988 and served for four years. He later became president of the Business Council of Manitoba, then ran for federal office in 2015.

He was diagnosed with blood cancer in 2019 — only days after he was re-elected.

Hundreds of people, including the prime minister, cabinet members and former political opponents, attended the memorial service for Carr in Winnipeg.

“He made me feel so special… he had special attention for me, he thought about me, he encouraged me, he knew exactly what to say… inspired me to continue doing difficult things in difficult moments,” said Trudeau.

Trudeau joked about how Carr didn’t only just care for him, but cared for everyone possible.

“This week I figured out it wasn’t just me, it was everyone and I felt less special,” said Trudeau. “But that was the gift he had. Jim will be missed by our team. (He) will also be missed by Canadians,” he added.

Former Manitoba premier Gary Filmon, a Progressive Conservative, also spoke as he entered the memorial service of Carr’s willingness to work across party lines, even during a time of constitutional debate.

“Even at the time of Meech Lake, he was a person who was always looking for a positive solution and he always had a wonderful view of life and what was good for Canada,” Filmon said.

“He worked for the National Film Board when I was working with Vaughan Street detention centre and he brought films over,” Doer said.

Kevin Lamoureux, a Liberal caucus colleague of Carr’s at both the provincial and national levels, said Carr was a politician who was respected by all parties _ an attribute that showed recently after the Commons passed a private member’s bill that Carr had put forward.

“Right after he spoke, members from the Bloc (Quebecois) came over to shake his hand,” Lamoureux said.

“The Bloc voted against his bill, but they respected his argument.”

Carr’s son Ben delivered the eulogy Saturday and said Carr’s willingness to listen was so extensive, it once led to a two-hour discussion with Jehovah’s Witnesses that had come to the family’s front door.

Ben Carr also read from a speech that his father was set to deliver in the Commons on Wednesday _ a farewell he did not get to give.

“Never stop learning. Keep an open mind. Speak only when you have taken the time to consider your words carefully,” Ben Carr quoted from his father’s prepared remarks.

“Seek to build bridges and consensus. Add a chair around the dinner table. Most importantly … be kind to each other.”