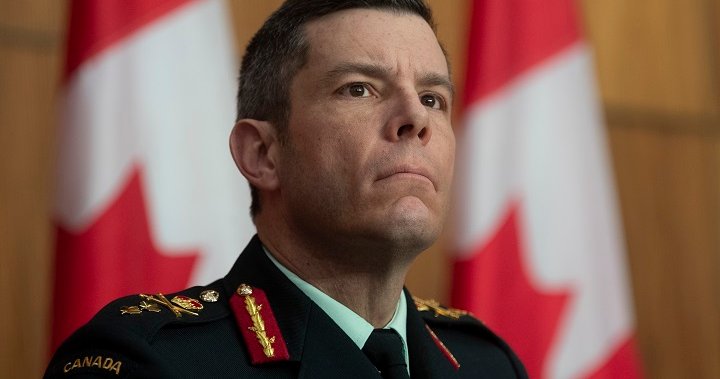 Maj.-Gen Dany Fortin will not face disciplinary action after a Canadian Armed Forces (CAF) review into an allegation against him concluded “he did not engage in sexual misconduct.”

Fortin was found not guilty of sexual assault last month by a Quebec judge in a case that stemmed from an incident in 1988 during his time at military college. Fortin, who maintained his innocence, was charged with one count of sexual assault by Quebec prosecutors last year.

There was no jury in the trial, which began in September and wrapped up in October.


“Following a review of the available information, including the Superior Court of Quebec’s decision in Maj.-Gen. Dany Fortin’s criminal proceeding, it has been concluded that, based on the balance of probabilities, he did not engage in sexual misconduct,” a CAF spokesperson said in a statement Monday.

The spokesperson went on to add that the CAF acknowledges “that this has been a long and difficult process for all individuals impacted by this matter.”

The military review weighed the allegation based on a balance of probabilities, which is different from the threshold used by civilian courts where allegations must be proven beyond a reasonable doubt.

Fortin, the former head of Canada’s COVID-19 vaccine campaign, will be assigned “appropriate duties commensurate with his rank and experience,” the CAF spokesperson said.

The military said in 2021 when Fortin was first charged with the now-acquitted charge of sexual assault that he had been temporarily re-assigned to the role of senior adviser to the commander of the Canadian Joint Operations Command.

2:55
Maj.-Gen. Dany Fortin ‘so relieved’ after judge finds him not guilty of 1988 sexual assault

She alleged during the trial Fortin was the perpetrator “without a doubt.” In the Crown prosecutor’s closing statement, Diane Legault argued there was no reason to believe the complainant would have forgotten, or become mistaken about the identity of her aggressor in the years since the alleged incident.

The complainant testified she was aware of how such complaints were handled by the CAF at the time, and that knowledge deterred her from wanting anyone to know what happened. It was only after she had retired and no longer feared career repercussions that she brought the alleged incident forward in 2021, the prosecutor said.

Fortin’s defence lawyer, Isabel Schurman, had asked the judge for an acquittal. She said that the complainant’s testimony lacked credibility, and that other witnesses had failed to back up some of the details of her story.

The defence had argued that while the complainant said she told her ex-boyfriend about the incident right afterward, he told the court he had no memory of the conversation.

Fortin, who was removed from his position in charge of the COVID-19 vaccine campaign in May 2021 due to an investigation into the allegation, is separately challenging that dismissal at the Federal Court of Canada.