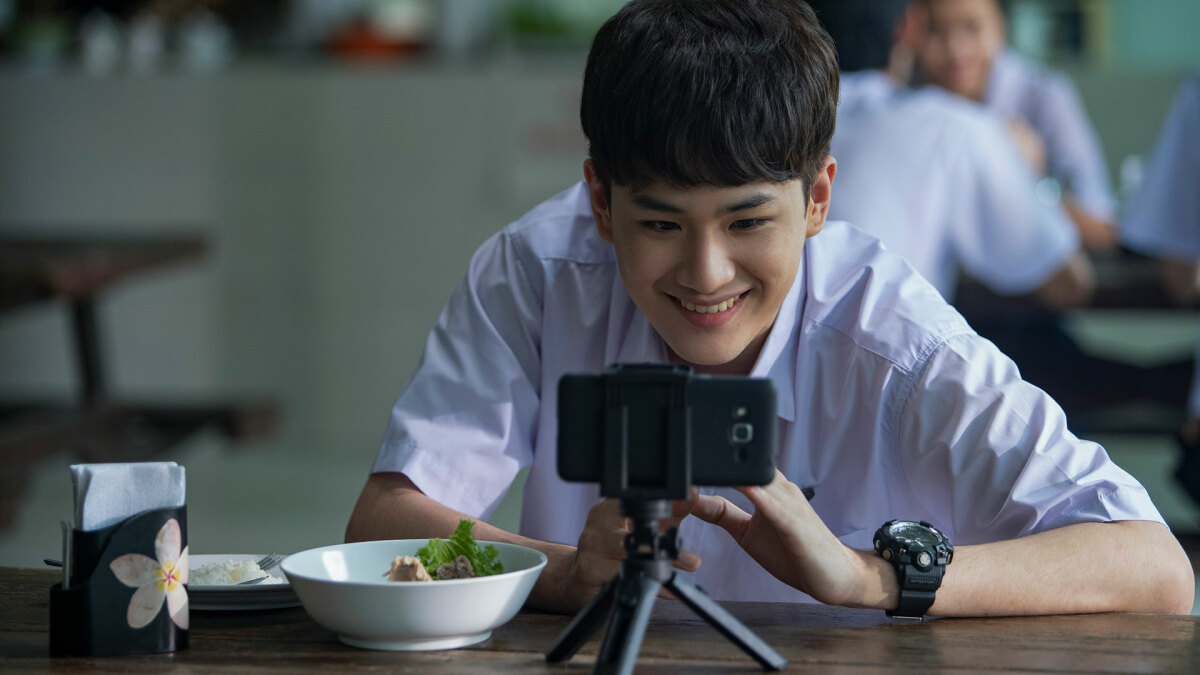 The aptly-titled “Lunch” episode of Netflix‘s comic-inspired horror anthology series, School Tales the Series, starts with a close-up of a student’s face, mid-livestream from his school’s cafeteria while adoring comments rain in.

Kong (Tonhon Tantivejakul), it turns out, is a social media influencer who specialises in exposing people for perceived wrongdoings. In the opening sequence he wastes no time in barging behind the food stall of Aunty Jong (Srida Pauvimol), a cafeteria worker whose spicy pork soup has suddenly become suspiciously popular, and exposing what appears to be something other than pork in her cooking pot.

What follows is a gory, twisty tale in which everything isn’t quite what it seems, and screenwriter Saniphong Suddhiphan plays with the concept of online shaming by making Kong go from adored hero to public villain (“clout chaser,” as online commenters brand him) after Aunty Jong is revealed to be nothing more than an apparent victim.

Rather than apologising, Kong digs his heels in, desperate not to back down from his original position — and in doing so he feels the online wrath he previously harnessed against others.

“Those fucking assholes,” Kong rants to his friends at one point. “This morning they supported me. You saw that right? And now they’ve switched to bashing me? Fuck them. I’ll expose all those trolls on my page.”

This difficult line between bullying and calling out wrongdoing, which John Oliver has previously discussed on Last Week Tonight and which plays out in internet dramas on an almost daily basis, is the driving narrative of Songsak Mongkolthong’s episode. It’s well-acted (Tantivejakul in particular is excellent), and the narrative is packed with the kind of twists and turns you’d expect from a Goosebumps episode (albeit a fairly adult one). Overall School Tales the Series is a patchy anthology — the stories are quite hit or miss — but “Lunch” stands out.

In a world where more and more children are getting smartphones, TikTok creators are a growing source of news, and some studies have highlighted the negative impacts of social media on mental health, the questions posed by “Lunch” seem more relevant than ever.

Is shaming someone on social media ever justified? What are the side affects of having a large online platform? And what happens when someone goes from hero to hated overnight?

“Lunch” tackles these questions, and it does so with a healthy side portion of jump scares, twists and gore.

School Tales the Series(opens in a new tab) is available to stream now on Netflix.