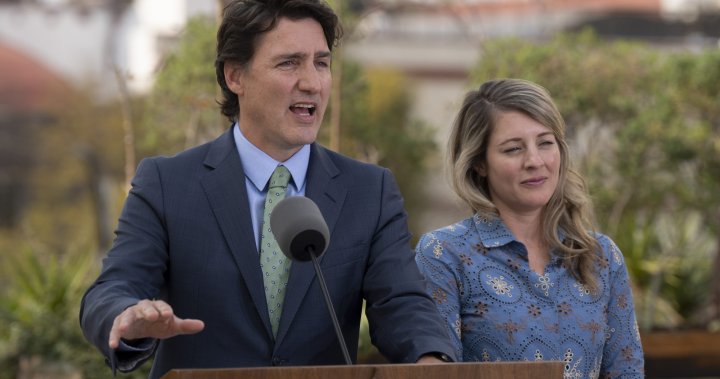 Prime Minister Justin Trudeau said Wednesday he will push to ensure Canada plays a vital role in North America becoming a reliable supplier of semiconductors to the global economy — yet admitted that role is “still somewhat to be determined.”

Trudeau made the comments following the North American Leaders’ Summit with U.S. President Joe Biden and Mexican President Andres Manuel Lopez Obrador in Mexico City, where the so-called “Three Amigos” agreed to boost semiconductor output and investment in the continent to compete with Asia, which has dominated the industry.

“The world has realized that an over-reliance on any one region for semiconductors will have dire consequences on the economy that we’re building for the future,” he said.

“Canada has a significant role to play in the semiconductor industry. What exactly that role is, is still somewhat to be determined.”


He pointed to the semiconductor assembly plant in Bromont, Que. — one of the largest such facilities in North America and a key supplier for tech giants like IBM — as one area where Canada can contribute.

The federal government’s new critical minerals strategy, unveiled last month, is designed to supply the resources needed to build increasingly important semiconductors that are used in everything from telecoms to electric vehicles and defence.

“Our focus is on making sure that Canada and Canadians are a part of the semiconductor ecosystem,” Trudeau said.

He added that Canada’s contributions to the North American auto industry — not just building vehicles but also various parts that are assembled elsewhere — provides an economic model that can be replicated for semiconductors.


COVID-19-fuelled lockdowns in semiconductor manufacturing centres like China and Taiwan led to a global shortage of microchips that is still being felt in the automotive and electronics industries, among others.

The pandemic, along with Russia’s war in Ukraine that impacted energy supplies for Europe, has led to Canada and other Western countries looking elsewhere around the world for strategic partnerships to avoid overly relying on single countries or regions for crucial industries — particularly “disruptive” nations like Russia and China.

The North American strategy agreed to this week will see a semiconductor forum organized for early 2023 to increase investment across all three countries.


Trudeau said conversations being had with North American partners and elsewhere regarding critical minerals and semiconductors are geared towards agreements that are still months and even years away, with nothing concrete having been agreed to during his time in Mexico City.

“The reception that we’ve seen from Canada’s critical minerals strategy … has been overwhelmingly positive,” he said.

“When we have great announcements to make, we make them.”

Mexico’s hopes of benefiting from the push to boost semiconductor output have been undermined by an ongoing dispute over Lopez Obrador’s nationalist energy policies, with Washington and Ottawa starting formal dispute settlement proceedings in July.

The spat, which centres on Mexico’s efforts to give priority to its cash-strapped, state-run energy companies at the expense of private foreign investors, was being closely watched at the summit. Trudeau said the issue was discussed, and that Lopez Obrador was “receptive” to his and Biden’s concerns.


Trudeau dismissed the idea that Lopez Obrador is a “trade skeptic,” saying the Mexican president was “extremely positive” about Canadian trade and investment in Mexican energy.

The pipeline is part of an overall strategy for Lopez Obrador’s government to lure foreign investment to its south from the northern frontier region, where it clusters for easy access to the United States.

On the more contentious issue of electricity — where Mexico is also being accused of limiting foreign-built plants — Lopez Obrador said he told Trudeau that he would meet with Canadian companies that have complaints with his administration’s policies.

The Canada-U.S.-Mexico free trade agreement, known as CUSMA, prohibits favouring domestic companies over those from other member states.

Canada and Mexico win trade dispute with U.S. on rules-of-origin for auto goods

Gwen Stefani accused of cultural appropriation: ‘I’m Japanese and I didn’t know it’

Trudeau said both Lopez Obrador and Biden — who has pushed a “Buy American” economic strategy that has prompted concerns about trade relations with Canada — are simply looking out for their own workers as Canada does, adding there’s “no contradiction” between that approach and working with allies.

“That’s what this particular gathering has been entirely focused on: understanding that the three of us working together are an extraordinarily competitive continent that can take on the world,” he said.

Trudeau will head right from the Mexico City summit to meeting with another key ally, Japanese Prime Minister Fumio Kishida, in Ottawa on Thursday.

Japan is similarly trying to pivot away from a reliance on China and Russia for electricity and food, echoing comments made by Trudeau and other leaders in recent weeks.

“There is a risk involved in relying excessively upon a single country economically and we now fear that risk more intensely than ever,” Japanese trade minister Yasutoshi Nishimura told a Washington-based think tank last week.

Canada’s recent Indo-Pacific strategy identifies the region, including Japan and South Korea, as another opportunity for key investment and trade corridors in order to mitigate China’s dominance.

— with files from the Canadian Press and Reuters