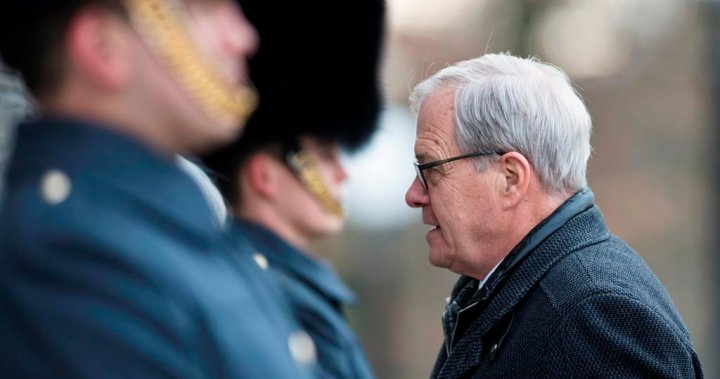 Canada’s opposition parties are voicing support for the growing pressure campaign on Veterans Affairs Minister Lawrence MacAulay to step aside, saying he has failed veterans who feel forgotten by Ottawa.

The union representing thousands of Veterans Affairs Canada (VAC) employees has called for MacAulay to resign or be fired, accusing him of repeatedly refusing to meet with members to discuss their concerns.

Veterans and the leaders of multiple advocacy organizations have echoed those calls as wait times for disability benefits continue to far exceed targets set by the government.

Ottawa has ‘failed’ veterans as calls grow for minister to resign: advocates

In a statement Tuesday, NDP MP and veterans affairs critic Rachel Blaney accused MacAulay of “letting the relationship sour” between the government, VAC workers and veterans themselves.

“The minister can’t say he’s working for our veterans when he won’t even listen to them,” Blaney said.

“With calls for the minister to be removed from his position from the Union of Veterans Affairs Employees, the situation has become untenable.”

Blaney added on Twitter that MacAulay should step down if he does not “step up and fix his relationship with the union.”

Although the Conservatives have not said explicitly whether MacAulay should step down, veterans affairs critic Blake Richards on Wednesday criticized “this absentee minister” as “another example” of the government failing veterans and their families.

“Veterans simply don’t trust this government to look out for their interests,” Richards said in a statement to Global News.

“It’s no wonder the union and veterans’ advocates are calling for the minister’s resignation.”


The minister’s office told Global News MacAulay is unavailable for comment this week due to a family emergency.

“The minister will continue to focus on improving the quality and timeliness of service to veterans, reducing the backlog, and honouring veterans’ sacrifices,” MacAulay’s spokeswoman Erika Lashbrook Knutson said in a statement Wednesday.

An update from the Office of the Veterans Ombudsman released last Tuesday found veterans were waiting an average of 43 weeks for disability claim decisions during the last fiscal year that ended in March. The number remains far above the 16-week standard set by VAC, which the Liberal government has repeatedly promised to meet.

MacAulay did not make himself available for comment on the report in the days following its release, which came just over two weeks before Remembrance Day.

Lashbrook Knutson provided more recent numbers from VAC that found the wait times had been brought down to an average of 25 weeks by the end of September.

The department also says the backlog in completed applications still awaiting a decision has been brought down from a high of over 23,000 files in 2019 to 9,600 in the most recent quarter.

Much of the VAC employees union’s current frustration can be traced to the department’s $570-million contract with Partners in Canadian Veterans Rehabilitation Services, which was awarded in June 2021 and will start to come into effect next month.

Veterans Affairs says the contract with the private company will help overworked case managers while ensuring veterans have access to a national network of psychologists, physiotherapists, social workers and other help across the country.

The union alleges the contract will have the opposite effect by adding another layer of bureaucracy with which veterans will have to contend, while dramatically changing the role of case managers without proper consultation.

The department, however, contends the contract does not outsource the work of case managers or change their role.


Lashbrook Knutson said cancelling the contract would lead to 14,000 veteran clients losing access to rehabilitation services, which will be delivered faster with Partners in Canadian Veterans Rehabilitation Services.

“Cancelling this contract would be immensely irresponsible and a great disservice to veterans,” she said.

She also pushed back on the union’s assertions that MacAulay has refused to meet with them to hear their concerns about the contract, saying the minister has sat down with senior leadership “on many occasions.”

MacAulay last month announced $43 million in new funding over three years to extend the contracts of 50 temporary case managers along with a number of other non-permanent staff.

The announcement came despite auditor general Karen Hogan’s call earlier this year for a long-term, permanent staffing plan for the department, where about half of those processing disability claims are also temporary employees.

In his statement, Richards, the Conservative veterans affairs critic, pointed to $900 million in allocated funding for the department that was not used in the most recent fiscal year and was lapsed — arguing it should have been used to address these issues.

An official with MacAulay’s office told Global News on background that the department receives funding based on overestimates on how many veterans will claim disability benefits, which are rarely met.

Veterans’ advocates have told Global News that they have heard from veterans who have grown increasingly disheartened with the continued issues plaguing Veterans Affairs and impacting access to care.

As Remembrance Day approaches and Ottawa prepares its annual tributes to current and former military members, veterans have gone so far as to accuse the federal government of not caring about them or their struggles.

That feeling was further enforced after Global News first reported on Aug. 16 that a VAC employee had discussed medically-assisted dying with a veteran, a case that has brought renewed scrutiny of the department and the ongoing struggle for veterans seeking support.


Sources told Global News a VAC service agent brought up medical assistance in dying, or MAiD, unprompted in a conversation with the combat veteran, who was discussing treatment for post-traumatic stress disorder and a traumatic brain injury.

An investigation into the matter is ongoing more than two months later, which MacAuley has distanced himself from while assuring Canadians that such discussions will never happen again.

In an interview alongside veterans’ advocates on Global News’ The West Block on Sunday, former Conservative leader Erin O’Toole — who served as veterans affairs minister under Stephen Harper — echoed the calls for MacAulay to resign.

“This (file) always needs a minister who’s very capable, very hands-on and action-oriented,” he said. “Mr. MacAulay is not like that, so he’s got to either step up or step out.”

— with files from the Canadian Press