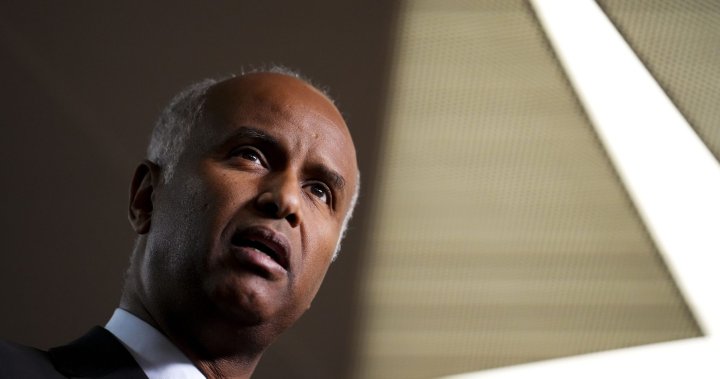 Canadian Jewish advocacy groups say the recent case of a taxpayer-funded consultant accused of antisemitism demonstrates the need for “focused” action by the federal government in laying out a plan to fight online hate.

The urging comes amid a troubling rise in antisemitism in Canada and around the world, and days after Diversity and Inclusion Minister Ahmed Hussen told a parliamentary committee he knew about hateful comments posted by Laith Marouf roughly a month before cutting funding to the Community Media Advocacy Centre (CMAC), where Marouf is a senior consultant.

The funding was cut off from the group, which was overseeing an anti-racism project, shortly after Marouf’s tweets about “Jewish white supremacists” came to light in the media in August.

“For us, it isn’t the delay” by Hussen that’s troubling, said Marvin Rotrand, national director of B’nai Brith Canada’s League of Human Rights. “What’s important is we must ensure nothing like this ever happens again.”

Hussen told the committee Friday that Liberal MP Anthony Housefather first shared his concerns about the organization with him on July 19 or 20 and that his office immediately asked the Heritage Department to review the project funding details and keep it in the loop on next steps.

Hussen insisted to Conservative MPs who criticized the weeks-long wait before funding was cut off that he did act immediately, but the process took time — a statement that Rotrand and other advocates say they accept.

They have also expressed support for statements from Hussen and Prime Minister Justin Trudeau, who have promised to strengthen the process for funding projects going forward.

1:56
Ottawa pulls funding to Montreal-based nonprofit over tweets by consultant


But they add more needs to be done, both in further limiting taxpayer funding to groups that espouse hate speech and fast-tracking proposed online anti-hate legislation.

“Social media companies have played a really important role in amplifying those sentiments of hate that are being circulated on the internet,” said Shimon Koffler Fogel, CEO of the Centre for Israel and Jewish Affairs.

“It makes it all the more important for the government to move forward in a really focused way with the legislation they are working on to address the issue of online hate and harms, and ways in which we can not just encourage but co-opt social media platforms to assume responsibility for those things that appear on their sites.”

Marouf’s Twitter account was private, but screenshots posted online showed a number of tweets with his photo and name.

One tweet said: “You know all those loud mouthed bags of human feces, a.k.a. the Jewish White Supremacists; when we liberate Palestine and they have to go back to where they come from, they will return to being low voiced bitches of thier (sic) Christian/Secular White Supremacist Masters.”

This summer, a lawyer acting for Marouf asked for his client’s tweets to be quoted “verbatim” and distinguished between Marouf’s “clear reference to ‘Jewish white supremacists’” and Jews or Jewish people in general.

Marouf does not harbour “any animus toward the Jewish faith as a collective group,” lawyer Stephen Ellis said in an August email to The Canadian Press.


Marouf’s account and others he created under alternate handles have since been suspended, but he has continued to use other platforms to double down on his incendiary language. He has insisted he is advocating for Palestinian independence from Israel.

In September, he delivered a statement on YouTube that called for the takedown of Canada’s “Zionist” government and for Trudeau to be arrested and jailed on grounds that it was the prime minister, not Marouf, who was spreading hate speech.

Hussen told the committee last week there will be a renewed and reformed anti-racism strategy, informed by communities including those “that have been attacked by Mr. Marouf directly.”

He also vowed that new conditions will be added to all federal funding agreements that allow the government to take action if an organization or person is found to have “promoted or shared hate, racism, antisemitism, or discrimination in any form.”


But advocates say that commitment should be extended to all Crown corporations and regulatory agencies, including the Canadian Radio-television and Telecommunications Commission.

Public records show that CMAC, Marouf’s organization, has received about $500,000 in payments from the independent Broadcast Participation Fund since 2016 after appearing as a public interest group in CRTC proceedings.

“It seems to us inconsistent for the government to have one approach, a strong and unequivocal approach, but for that not to extend to all agencies and entities that are charged with the public trust and benefit from taxpayer dollars,” said Fogel.

The CRTC told Global News in a statement that the payments do not amount to funding for the CMAC, but were recovered costs for participating in proceedings that any group can apply for.

“To be clear, the CRTC has not provided any funding to CMAC,” a spokesperson said, adding in a follow-up email that the Broadcast Participation Fund is also not funded through the CRTC’s budget.

The concerns come as antisemitic incidents continue to rise. The latest audit of police and advocate reports by B’nai Brith Canada found 2021 was a sixth straight record-breaking year for antisemitism, with nearly 2,800 recorded incidents across Canada.

The numbers marked a 7.2 per cent increase from last year and — more distressingly — a 733 per cent rise in violent incidents.

“Online hate, more than anything else, is the new way of driving the targeting of minority groups in Canada, and we need new laws in place to control that,” said Rotrand.

“Perhaps when we audit in 2022, the numbers will be lower. Let us hope so. That being said, we are still a long way from when we can breathe easy and say we’ve eradicated the scourge of antisemitism and other forms of hate and racism in Canada.”

— with files from The Canadian Press