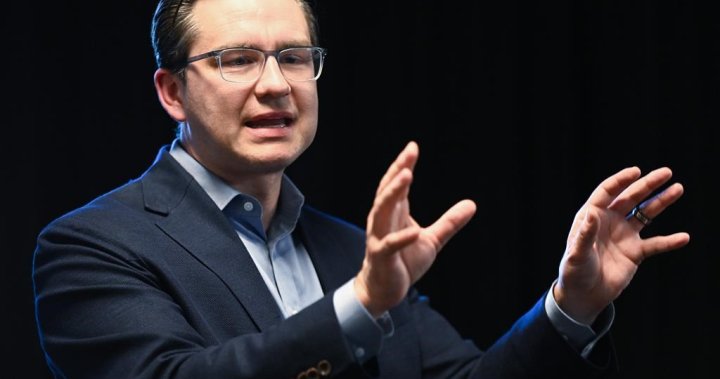 Pierre Poilievre is waging one of his final battles in the Conservative leadership race – one in which even his main rival is onside.

His latest target? The jargon used by the federal bureaucracy.

In a video posted to social media on Thursday, the apparent front-runner promises to enact a “Plain Language Law” that he says would bring an end to government jargon, including in legislative documents.

The official language of government is neither French nor English. It is bureaucratese—lots of words to say little.

Poilievre began his announcement by invoking the words of Antoine de Saint-Exupery, the famous French author of “The Little Prince,” who once wrote a line about perfection.

“Unfortunately,” he continued, “our governments do nothing but add and add and add paperwork and forms and endless red tape.”

Poilievre said his new law would ensure government publications are instead written in simple, straightforward sentences,but he didn’t explain how such a law would work – or how the bill itself would be written without using jargon.

The law would also empower the auditor general to scan government publications for the presence of bureaucratese, he says, and provide Canadians with a government website where they can report any gibberish.

He said the law would also make it a job requirement for the government to hire writers that can write plainly and adapt bilingual language training for public servants to ensure they learn the most easy-to-understand words.

Diagolon: What to know about the group whose founder shook Pierre Poilievre’s hand

As for why it’s needed, Poilievre argues government documents, including forms, are needlessly complicated because the bureaucrats who write them use overly technical language, which creates hurdles for small businesses that have to read them.

All that time spent trying to understand what the documents say adds up, he says.

The federal government already has a policy about how its communications should sound, with rules stating its messages must be non-partisan and clear. The policy came into effect in 2016, early on in Prime Minister Justin Trudeau‘s tenure.

Former U.S. President Barack Obama also made simplifying language a priority during his first tenure in the White House, signing the Plain Writing Act in 2010.

Poilievre’s announcement Thursday sparked a rare moment of agreement with Jean Charest, the former Quebec premier whom Poilievre has lambasted throughout the race for being out of touch with the current party.

Tasha Kheiriddin, one of his campaign co-chairs, said that while she likes the idea in principle, she believes enacting a law to simplify the language of government would only result in more bureaucracy.

It’s “more government to simplify government, which I find a strange approach for Mr. Poilievre to take,” she said.

Poilievre’s fight for fewer words appears to be one he takes personally, as he complained about politicians’ use of jargon in a speech given more than a decade ago.

Back in 2009, when the prominent Tory only had five years of being a member of Parliament under his belt, he advised young conservatives on the value of learning to communicate as a way to advance their political careers.

Conservative leadership race: Over half of members have voted a week before deadline

Poilievre, who now boasts one of the largest social media followings in Canadian politics, complained then about how few people on Parliament Hill knew how to write and speak in a way that everyday Canadians could understand.

“It is not their responsibility to decipher excessively verbose language,” he said of voters.

Poilievre instructed his 2009 audience that the best way to learn to communicate plainly is to write for newspapers – which take complex ideas and use simple language to explain them to readers _ and knock on doors.

Poilievre’s skill as a communicator is one of the reasons his supporters say they are backing him. His campaign says it sold more than 300,000 memberships and many Conservatives expect he will be elected the party’s next leader Sept.10.

Voting results will be announced that evening at a convention in Ottawa.

The party announced Thursday the event will feature a familiar face as a special guest speaker: Peter MacKay.

The former cabinet minister is an elder statesman in the movement, the party says, having led the erstwhile federal Progressive Conservative party into a merger with the Canadian Alliance in 2003, which birthed the modern-day Conservative Party of Canada.

MacKay decided against joining the leadership race this year, saying he was still paying down campaign debts from the 2020 leadership contest, which he lost to former leader Erin O’Toole.