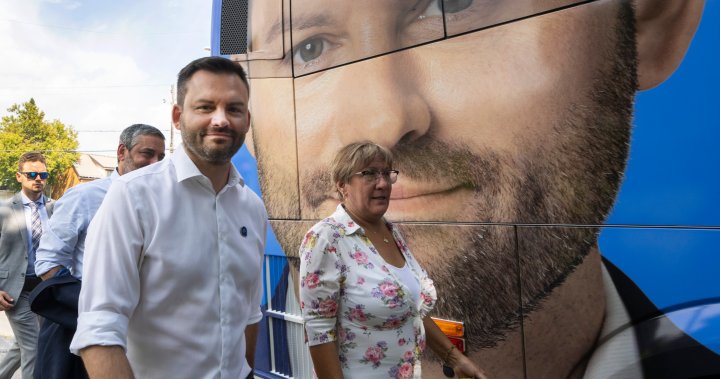 The Parti Québécois is pledging a revamped and stronger version of the landmark French-language charter within the first 100 days if it forms the next provincial government as the Quebec election campaign entered its first full day.

Paul St-Pierre Plamondon made the vow during the first full day of the Quebec election campaign on Monday, saying there is an urgency to act and fight the “steep decline” of French.

“It’s not the time for half-measures and not for half-truths,” the leader of the party, which advocates for the independence of Quebec from Canada, told reporters.

The French-language charter is known as Bill 101, which was first passed into law in August 1977 by the René Lévesque government. The legislation was created to protect and bolster the language in the province while also paving the way to end the dominance of English. It overhauled the linguistic makeup of Quebec, and it has been widely hailed and criticized for more than 40 years.

He specifically pointed to how the proportion of people who mainly speak French at home continues to decline in nearly all provinces and territories, including Quebec, according to the latest census release.

“In the short term, there is a threat to the Quebec people to see their language disappear little by little,” St-Pierre Plamondon said.

2:21
The writ has dropped, and with it, Quebec’s election campaign is officially underway

The writ has dropped, and with it, Quebec’s election campaign is officially underway

St-Pierre Plamondon said he wants to see the charter be expanded to the province’s junior colleges, known as CEGEPs. Doing so would prevent non-anglophone students from attending English-language CEGEPs. As it stands, Bill 101 is limited to elementary and secondary levels, where francophone and allophone students must attend French-language schools.

Aside from the education system, the PQ also wants stricter measures for businesses and immigrants, advocating that newcomers should already have mastered French before arriving in Quebec.

St-Pierre Plamondon said Bill 101 should be applied to federally regulated companies. The PQ would also nix the bilingual status of municipalities where anglophones make up less than 33 per cent of residents.

“Those measures are important because they have structural impact on the use of the French language and thus have the capacity to reverse the decline,” St-Pierre Plamondon said.

Otterburk Park, a city in Longueuil on Montreal’s south shore, would be one municipality to lose its bilingual status under the PQ’s plan. The last census shows only 5.7 per cent of residents mainly speak English at home, but the mayor said it’s important to provide services to everyone.

“The English-speaking population is largely made up of seniors,” Otterburn Park Mayor Mélanie Villeneuve said.

“With a view to providing quality service, particularly to more vulnerable groups of people, the council believes that it is important to be able to communicate with anglophone citizens in the language of their choice.”

The leader of the PQ, who is also vying for his first seat in the provincial legislature, made the pledge to toughen the charter in front of a bust of Camille Laurin. St-Pierre Plamondon said it was appropriate to make the announcement there, since the late PQ minister Laurin is considered the father of Bill 101.

The promise also comes as the PQ looks to bolster its presence at the national assembly this upcoming election as recent polls placed the party in fifth place. Once a powerhouse in the province, the party only had seven members in the legislature at the start of the election campaign.

Voters head to the polls on Oct. 3.

— with files from Global News’ Gloria Henriquez and The Canadian Press

2:01
The percentage of people speaking French as their first language continues to fall in Quebec, leading to anxiety over the future of the language

The percentage of people speaking French as their first language continues to fall in Quebec, leading to anxiety over the future of the language – Aug 17, 2022