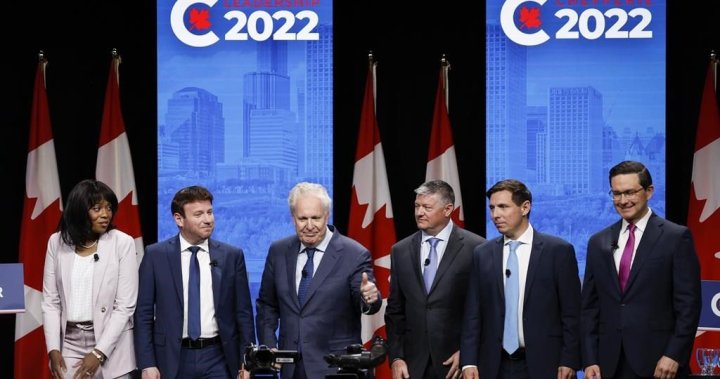 The death of the Queen has prompted the Conservative Party of Canada to rethink how it plans to announce its next leader.

The party had been planning to do so with an event in Ottawa on Saturday, but the death of the monarch now means the country will be in a period of mourning during that time.

The chair of the party’s leadership election organizing committee said in a statement Thursday the party will respect the protocols surrounding her death.

Ian Brodie said the committee “is considering an appropriate, respectful way” to announce the race results and will provide an update early Friday.

The party had already booked a space at a convention centre in downtown Ottawa, sold tickets for $150 and created a lineup of speakers for the event, including former cabinet minister and 2020 leadership contest contender Peter Mackay as a special guest.

Party brass, members of Parliament and those on different campaigns had all made plans to arrive in Ottawa to attend the event.

On Thursday, the party also began the process of putting 400,000 ballots into counting machines to get ready for Saturday’s expected announcement of the results.

This marks the second time that the Conservative party’s announcement of a new leader has needed to adjust.

The 2020 race that saw former leader Erin O’Toole win was interrupted by the start of the COVID-19 pandemic, forcing campaigns to cancel in-person gatherings and forgo large crowds, including for when results were announced.

Heading into this weekend, the party had been celebrating the fact that nearly 418,000 party members had cast a ballot out of a voters list some 678,700 names long.

It says such figures are record-setting in Canadian politics and demonstrate momentum behind the party because tens of thousands of new members signed up.

Longtime Conservative member of Parliament Pierre Poilievre has said his campaign sold more than 300,000 memberships, leading many in the party to believe he had the best shot of winning the contest off his central message of “Freedom.”

Poilievre and other candidates in the race took to social media following news of the Queen’s death Thursday to express their condolences.