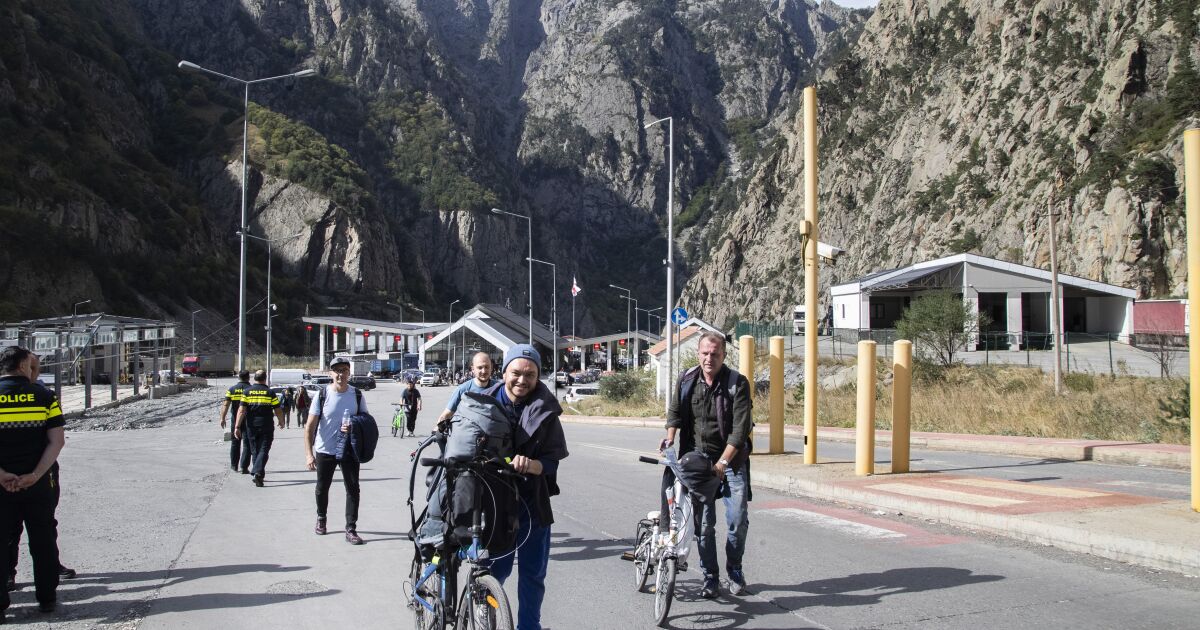 Less than three weeks ago, Russian President Vladimir Putin ordered the call-up of 300,000 men to bolster army ranks decimated by battlefield routs in Ukraine. Now, in an extraordinary exodus, waves of fighting-age men have fled Russia in what appear to be roughly those same numbers.

By plane or by bicycle, in cars or on foot, at a rate sometimes reaching tens of thousands per day, Russian men desperate to avoid deployment to the front lines — or face long jail sentences for draft evasion — are seeking haven in neighboring and nearby countries.

They have crossed land borders into Finland or Mongolia, booked expensive air tickets to Turkey or Serbia, decamped for the former Soviet republics of Kazakhstan, Georgia and Armenia. In one striking instance, two Russian asylum seekers made their way by boat to a remote Alaskan island in the Bering Sea, the state’s two U.S. senators said.

Within some destination countries, and across the wider West, there’s sharp debate over whether those leaving are deserving of shelter.

Some argue that Russians who truly object to the war — and not merely to their own conscription — should be welcomed, or at least tolerated. Others point out that as a practical matter, the mass flight is reducing the pool of men available to fight in Ukraine.

There’s worry in some quarters about the security risk. And many Ukrainians and their supporters believe that abetting draft evaders’ resettlement helps Putin, who turned 70 on Friday, escape accountability at home.

“It would be wrong for us to close the border to Russians,” Merab Metreveli, a well-known TV news anchor in Georgia — a country that was itself invaded by Russia, in 2008 — wrote on Facebook at the end of September. But he also said “uncontrolled” entry posed risks.

Many Russians who made the decision to depart did so with little more than a knapsack and whatever cash they could scrape together, leaving jobs, homes and family behind.

“I need to build my new life now,” said a 30-year-old film producer named Sakhamin, who made his way to the Georgian capital of Tbilisi days after Putin’s Sept. 21 announcement of a “partial” mobilization.

“I understood that if I didn’t leave,” he said, “I would stay on the other bank of the river that separates the new and the old worlds.”

In Russia, the mass flight triggered by the call-up amounts to a stark public rejection of months of rosy government claims about the nature and scope of the “special military operation.” Many Russians tacitly accepted the Feb. 24 invasion, believing it would have little effect on their daily lives, but the mobilization order suddenly brought the war home.

At the only operational border crossing into Georgia, a miles-long traffic jam that was visible in satellite imagery built up soon after Putin’s mobilization announcement.

Sakhamin — who did not want his full name used for fear of retribution against relatives remaining in Russia — traveled with his girlfriend. They took a taxi as far as they could, then walked the last 10 miles to the border, where they joined an hours-long line for Russian authorities to check their documents.

While waiting, they met a despairing would-be escapee who had been turned back. His passport was confiscated, the man told the couple, and he was served with conscription papers on the spot.

Such decisions seemed haphazard, with some men reporting almost surreal encounters as they crossed over. A 24-year-old from Moscow named Mark, who also recently arrived in Tbilisi, lied and told a Russian border guard he was going to Georgia for a friend’s wedding. He said the guard’s only question was why he had friends in Georgia.

In some favored destinations, the window for reaching safety was relatively short. Nine days after Putin’s announcement, Finland, the last land route for Russians into the European Union, barred Russians from entering as tourists. In the week prior to that, two-thirds of the 66,000 Russians coming into the EU had arrived via Finland, according to the bloc’s border agency, Frontex.

“I was lucky,” said Yevginiy, a 34-year-old supply-chain manager who caught a sold-out bus from St. Petersburg to Helsinki a few days before Finland’s entry restrictions were imposed. “Not everybody has the opportunity to get out.”

Precise totals of those seeking to avoid military service are difficult to determine, in part because few officially declare their intentions. But the independent Russian newspaper Novaya Gazeta cited an estimate by the security services that in the four days after the call-up was announced, a total of 261,000 men between the ages of 18 and 40 had left the country. Many more have since fled.

The Interior Ministry of Kazakhstan, which shares a border with Russia, this week reported 200,000 Russian arrivals since the mobilization announcement. In Turkey — where, unlike in the EU, direct flights from Russia are allowed to land — officials have not disclosed arrival figures, but dozens of daily flights filled mainly with fighting-age men have been touching down in several Turkish cities.

The Balkan Investigative Reporting Network used open-source flight data to put arrivals in Turkey in the first few days alone at more than 30,000, with more than 1,000 other Russians catching planes to Serbia during that period. Mongolia, which says it is neutral in the war, reported 12,000 entries between Putin’s announcement and the end of last week.

In Georgia, where tens of thousands of Russians moved after the war began, volunteer groups that have been aiding new arrivals, and advising others on how to cross over, said the influx had probably doubled the numbers already there. With Russian troops occupying two separatist territories in Georgia, some opposition politicians have said that the newcomers should be made to explicitly express recognition of the country’s territorial integrity.

Russia has a million active-duty military personnel, about 200,000 of whom took part in the initial assault on Ukraine — an invading force that military analysts have said was far too small to seize and occupy a country of 44 million people.

Over the course of eight grinding months, Ukraine claims more than 60,000 Russian troops have been killed or otherwise removed from the fight. Western estimates range considerably lower, but Russia is suffering a historic mauling.

With Ukrainian forces recapturing swaths of the country’s south and east, Russian officials are using euphemisms like “regrouping” to describe hasty retreats by Moscow’s forces, and withhold information about what appear to be witheringly high casualty rates. However, some cracks have appeared in the official facade.

War hawks infuriated by territorial losses are directing unprecedentedly harsh criticism at senior military leaders, including Defense Minister Sergei Shoigu, a longtime Putin confidant who may now find himself scapegoated for battlefield failures. On state television, hard-line commentators have taken to lamenting what they characterize as an unfair fight powered by Western weaponry, with Russia as victim.

As social media postings have documented a chaotic rounding up of recruits — some are shown being dumped in desolate fields without supplies, given rusty old rifles, or ordered to buy their own food and equipment — Putin acknowledged that “corrections” to the mobilization process were needed, but did not back away from his war aims.

Instead, in a bellicose speech declaring the annexation of four Ukrainian provinces, the president declared that these territories, as now-Russian soil, would be defended by any means necessary. But even as he spoke, Russian forces in some affected areas were in rapid retreat. Much of the world dismissed the announced annexations as illegal.

Western military analysts have expressed skepticism that the mobilization will do much to blunt Ukrainian offensives, even though some of the new recruits are already reaching the front lines.

“Rushing thousands of untrained and unmotivated Russian men to the front will not meaningfully increase Russian combat power,” the Washington-based Institute for the Study of War wrote in an assessment late last month.

“Get a tattoo with your name and surname. So that we know how to find your relatives when you are killed.”

Some of those trying to avoid being conscripted said they initially believed official assurances that only men with military experience would be called up. But word spread of a widening dragnet that ensnared men who were obviously unfit for service, or had no relevant training or skills. The Kremlin has blamed overzealous local authorities.

With the Defense Ministry reporting this week that 200,000 men have been mobilized — two-thirds of the way to meeting Putin’s target — roundups have fallen disproportionately on poorer republics populated by ethnic minorities. In Dagestan, a Muslim-majority republic whose soldiers have already died disproportionately in Ukraine, scores of people have been arrested in protests.

Demonstrations erupted in some bigger Russian cities as well, as they did in the war’s earliest weeks. But protests were quickly quelled by police, who availed themselves of one particularly chilling tactic: serving some detainees with draft notices.

Ukraine has set up hotlines for Russian troops who want to arrange surrenders, promising humane treatment. The country’s defense minister, Oleksii Reznikov, this week recorded an unusual video telling freshly mobilized Russians that they had been tricked and betrayed by their leaders.

Ukrainian President Volodymyr Zelensky, who often addresses Russians in their own language, had a grim warning of his own for Moscow’s newest foot soldiers.

“Get a tattoo with your name and surname,” he advised. “So that we know how to find your relatives when you are killed.”