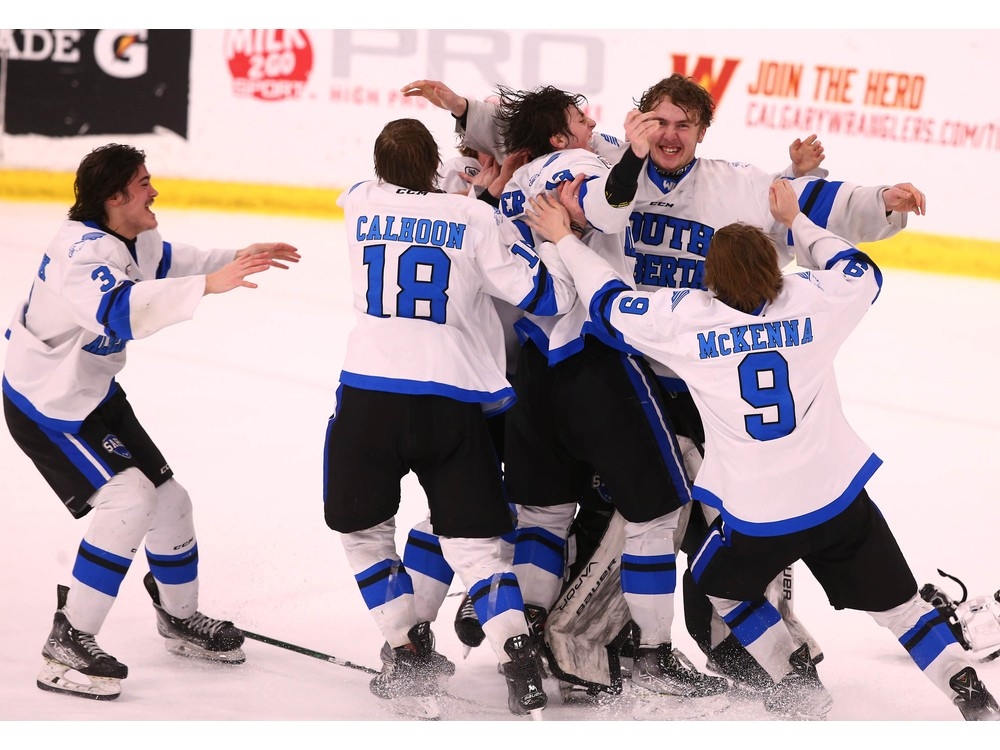 The last time a team was on this kind of run in this tournament, ‘Sid The Kid’ was in on the fun.

Until Sunday, that is, when South Alberta Hockey Academy topped the Calgary Buffaloes 6-0 in the finale of the now-rebranded Circle K Classic to defend the crown it won in April.

“That’s unreal — it’s unfathomable to think about,” said SAHA captain Elias Eisenbarth, when learning of the string of success by Crosby and Shattuck-Saint Mary’s moments after hoisting the magnificent trophy awarded to the tourney victors. “And for us to do it once is amazing on its own, but to do it back-to-back — and for me to get to be a part of it both times — is so special.”

Crosby actually celebrated the special moment just once in that stretch of five years — in 2003. That was two years after Shattuck-Saint Mary’s wrapped up a run of three-straight Mac’s title takes — something SAHA can equal next year with a return to The Circle K.

But first, they’ll savour this triumph as the only team of 32 in this winter’s event to win all six games, capped by the dominating final performance in a jam-packed Ken Bracko Arena at Max Bell Centre.

“It’s even more sweet than last year — it’s such an amazing feeling,” said Eisenbarth, one of only five returning players for SAHA in the tournament. “This is the closest I’ve ever been with guys on a team — the idea of a family is so essential, and we are a family. We go to battle for each other, and we do everything for each other. When you are a family and you have a common goal, there’s so much you can accomplish.

“Everybody had their moments. We had big guys step up at big times. We had crucial goaltending. Our defence was unreal. Everybody produced — everybody put in. And I think that’s what makes this sweeter.”

From the opening whistle in the championship contest, the sports school side from Dunmore — just outside Medicine Hat — was full-on the better team.

Eventually, tourney all-star forwards Kade Duell and Gavin McKenna combined to crack Buffaloes goaltender Ty Matonovich, who proved stellar up until that point and for a longtime after the opening goal scored 14 minutes into the game. Duell reaped the rewards of the goal by poking in a loose puck moments after he dug it out from the end-boards on the forecheck and centred to McKenna, who made sweeping move across the front of Matonovich to open up the goalie.

“Once we got that first one, we kept hounding them and I don’t think they could handle us,” said McKenna, a 15-year-old phenom who was named tournament MVP. “Obviously they’re a great team — can’t take anything away from them. But we just played unbelievable.

“We played with heart and passion — and it all worked out in the end.”

It was a commanding second period that really got SAHA there.

A power-play shot by Noah Dziver put them up 2-0 nearing the midway point of the game. Then a few minutes later, Sammy Hynes — on a breakaway — and Josiah Jackson — on a shot from the slot off a rush — scored just 35 seconds apart to blow open the affair.

In the third, Nate Corbet’s rocket to the top-shelf from well out and Brett Calhoon’s finish of McKenna’s perfect pass on the power play iced the title.

Zach Zahara made 23 saves to secure the shutout and clinch the playoff MVP honour.

“Feels unbelievable,” McKenna said. “From the start of the tournament until the end, we stuck with it.”

Indeed, McKenna and the Canadian Sports School Hockey League club refused to let the Buffaloes — winners of the last Mac’s played pre-COVID — take back the title in a battle between the tourney’s last two champs.

After winning the tourney title four times previously — in 2019, in 2008, 1986 and 1984 — the Buffs were also trying to become the first to win five and separate themselves from the only other team with four triumphs — that, of course, being Shattuck Saint Mary’s.

“We just couldn’t seem to get the momentum against a good team over there,” said Buffs head coach Brent Harrison, whose charges came in unbeaten in regulation in 20 league games. “They had a lot of jump, and we didn’t seem to have quite as much.

“For us to come this far and have that kind of game, it was tough. The guys put a lot of effort into it and a lot of work. We’re proud of them, and we’re going to move on with big goals ahead.”

Both teams went on 5-0 marches to reach the final. SAHA topped the Saskatoon Blazers 4-2, the Calgary Northstars 5-0 and the St. Louis AAA Blues 8-7 — in overtime — in round-robin action. Meanwhile, the Buffs beat the Swift Current Legionnaires 4-1, RINK Kelowna 3-1 and Chicago Mission 7-2 in the round robin.

SAHA shutout B.C.’s Yale Hockey Academy 4-0 in the quarterfinals and eliminated the Ontario rep-side Burlington Eagles 4-1 in the semifinals. At the same time, the Buffs then went on to drop Team Hungary 7-2 in the quarters and smoke Vancouver Island’s Shawnigan Lake School 6-1 in the semis.

Another local side, the Edge School Mountaineers, won the B-side crown for the second consecutive year — that after a 5-2 beat of the Okanagan Rockets earlier Sunday at Max Bell. Miles Cooper popped two goals for Edge, while teammates Terik Paraschak, Jett Koch and Noland Dupont sniped singles.

The C finale featured New York’s Bishop Kearney Selects out-scoring Edmonton Oilers Blue in a 5-4 shootout finish. Escalus Burlock, Garrett Thom, Zach Coutu and Ethan Hughes scored for the CSSHL side while Corson Maguire, Chris Magovern, Nate Delladona and Trevor Berg netted pucks for the American crew. There was no scoring through two overtime periods before a shootout was won on Delladona’s goal for Bishop Kearney.

The D-bracket final saw the B.C. Elite Hockey League’s Fraser Valley Thunderbirds edge the St. Louis squad 5-3 after Brendan Ruskowski’s go-ahead goal in the third period turned out to be the winner. Tyler Pretty had the T-birds first two goals, while teammate Ryan Pretty scored in the second and Mitchell Kehler iced it with an empty-net marker. Jackson Machon, Aiden Meintz and David Vitt replied for the Blues.

The other winner was the city’s hockey community itself, given the fact that a whopping 4,000-odd fans took in the final to cap the first year of the event’s return to the usual holiday time-slot following the pandemic.

“It’s great having people come out — I don’t know if this building’s ever been this full for any event,” said tournament GM Jesse Hale amid the standing-room-only crowd. “It brings the atmosphere up, which is great. Obviously, having the Buffs in the final helps. So does having the champs from last year. And also kids like Gavin McKenna.

“The hockey all week was great, too. People got excited seeing what was there. And I think there’s some buzz in the city from the tournament, and it led to all this. We’re thankful that people came out.”