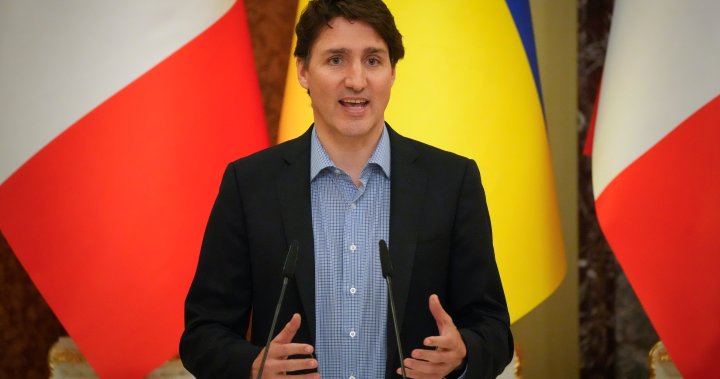 Canada isn’t yet looking at sending Leopard 2 tanks to Ukraine, Prime Minister Justin Trudeau says, despite a report that the Ukrainian leadership intends to request them.

According to a report from The Globe and Mail on Monday, Ukraine intends to ask Canada for some of its Leopard-2 main battle tanks — if Germany approves the re-export of the weaponry, which Chancellor Olaf Scholz is facing pressure to do.

British tanks given to Ukraine ‘will burn just like the rest,’ Russia says

“We’ll look at all the requests from Ukraine but we’re not there yet, for the Leopard 2 tanks,” the prime minister said, speaking in French.

“But we’re here to provide Ukraine what it needs so they can beat Russia.”

The re-export of Leopards requires German government approval, since they manufacture the battle tank and have a key role in the restrictions around re-exporting it.

Because of this, other countries who have bought the tanks cannot send them to Ukraine without Germany giving them the green light.

Scholz has expressed concerns that the use of NATO-standard heavy tanks in the war could escalate the conflict — though he has said that if there is agreement among Kyiv’s main allies about re-exporting the tanks, he won’t stand in their way.

1:22
German defence minister resigns amid pressure to ramp up aid for Ukraine


Mykhailo Podolyak, a top adviser to Ukrainian President Volodymyr Zelensky, told The Globe and Mail he was “optimistic” Germany will come around.

If it does, Poland and Finland have already indicated they will send some of their Leopard 2 tanks to Ukraine.

Canada would likely face political pressure at any such point to do the same.

Meanwhile, the U.K. announced plans on Saturday to send 14 of its Challenger 2 main battle tanks, as well as other advanced artillery support, to Ukraine in the coming weeks. The move prompted a swift rebuttal from Russia, which warned the tanks will “burn.”

“They are using this country [Ukraine] as a tool to achieve their anti-Russian goals,” Kremlin spokesman Dmitry Peskov said when asked about the British tanks.

“These tanks are burning and will burn just like the rest,” Peskov said.

Peskov said the new supplies from countries like Britain and Poland would not change the situation on the ground, but were an attempt to draw out the conflict which he said would ultimately bring “more troubles” on Ukraine.

Russia invaded Ukraine in February of last year, and so far there is no clear end to the war in sight.

The brutality continues to ravage Ukrainian cities as the Kremlin now casts the war as an existential battle with an aggressive and arrogant West — and has said that Russia will use all available means to protect itself and its people against any enemy.

On Sunday, the Ukrainian city of Dnipro faced the deadliest civilian incident in Moscow’s three-month campaign of hurling missiles at various cities. The death toll from the Russian missile strike rose to 40 on Monday — and dozens remain missing.

“The world must stop evil,” Zelenskyy wrote on Twitter in the wake of the attack.

“We’re fighting for every person, every life. We’ll find everyone involved in terror. Everyone will bear responsibility. Utmost.”

— with files from Reuters