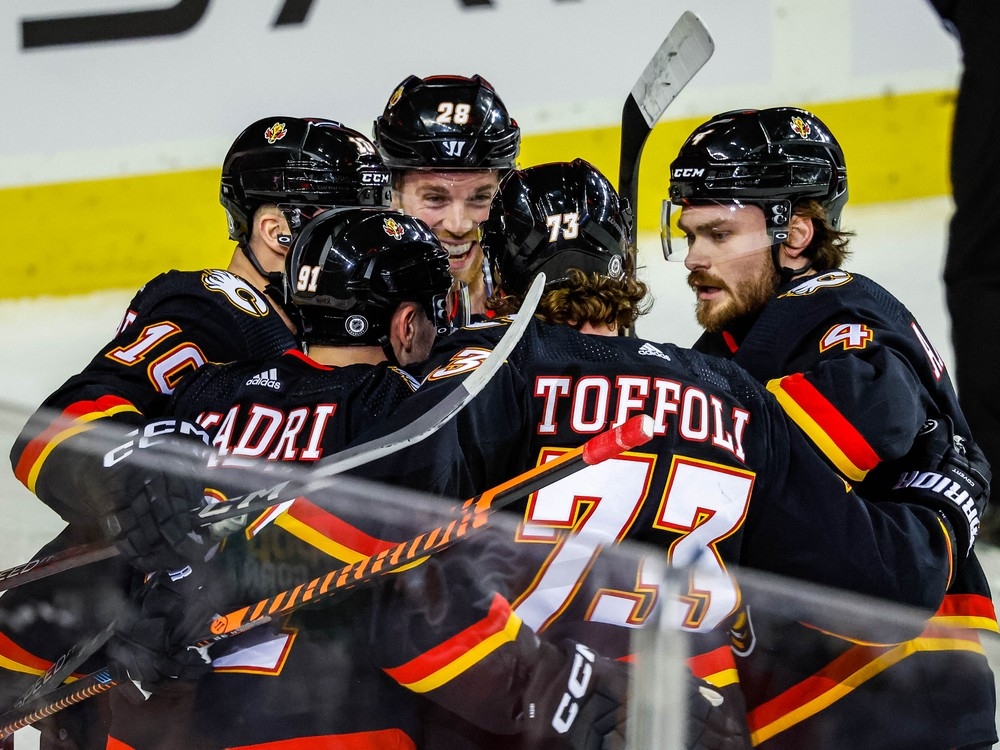 It’s a great day for hockey.

That was a favourite line for the late ‘Badger’ Bob Johnson, and it was accurate Saturday for the Calgary Flames as they earned — and earned is definitely the right word for it — a 6-3 victory in a scrappy, spirited matinee against the Tampa Bay Lightning.

It was a historic afternoon for Darryl Sutter, who is now the winningest coach in franchise history, a record that previously belonged to Badger Bob.

It was the most entertaining contest at the Saddledome in months.

And it may have been as close to a complete effort as we’ve seen from the Flames so far this season. At least, that’s how a lot of people saw it.

“No, we haven’t played one yet,” Sutter scowled.

The Jolly Rancher always seems a little extra grouchy after a win, and this record-setting occasion was no exception.

Between his two coaching stints in Cowtown, Sutter has totalled 194 regular-season victories. Badger Bob collected 193 from 1982-87.

“I’d like to have won Game 7 in 2004 in the playoffs, the game against Tampa,” he said, referring again to the unfinished business that brought him back for a second go-round with the organization. “It’s not hard to pass somebody — all you need to be is good.”

The Flames (22-16-9) were good, very good, in this Hockey Day in Canada clash with the Bolts, even if their cranky coach wasn’t about to admit it.

While the locals were the better of the two teams for almost the entire afternoon, the Lightning did strike twice in a 50-second span in the middle frame to briefly claim the lead.

Andersson added a couple of assists, while his top-pairing sidekick Noah Hanifin rebounded from a costly giveaway to post a three-point performance of his own.

Nazem Kadri also tickled twine, Jonathan Huberdeau and Blake Coleman sealed the result with late empty-netters and Dan Vladar continued an impressive run between the pipes. Calgary’s backup is now 8-0-3 in his past 11 decisions.

“Right from the start, I thought we were really good,” Dube said after the Flames outplayed a squad that has skated in the Stanley Cup final in three straight years, as evidenced by a 41-24 margin in shots on goal. “Every shift, we didn’t take too many off, and we played the right way. There was a lot of compete from the guys today. We were really prepared to play and prepared to win. It was a really good job by our group.”

“It was a fun game to play,” added Andersson, his son Benjamin in his arms for his media scrum. “And it was probably a fun game to watch, too.”

Everybody except Sutter was in a good mood afterward, although nobody was wearing a bigger smile than forward call-up Jakob Pelletier, who finally logged his NHL debut after sitting six in a row as a healthy scratch.

In fact, Saturday’s initial roar from the C of Red came when the 21-year-old left-winger was first to emerge from the tunnel for the pre-game prep, spinning the customary solo lap for any NHL newbie.

“It’s unreal,” Pelletier said. “When I came out for warm-up, I was kind of stressed. First shift, too. But I think after the first one, I was like, ‘It’s just playing hockey, right?’

“It’s a dream come true. Since I’ve been probably four or five, the main goal is to play in the NHL. Today was the first one, so it’s great.”

Sutter wasn’t about to celebrate that accomplishment, either.

Asked about his initial impressions of the Flames’ first-round selection from the 2019 NHL Draft, he replied: “Jakob Pelletier, what number is he?” He then proceeded to read off his stat-line, which included one shot on goal and one hit in 6:35 of icetime.

Dube’s game-winning goal, a rocket over Andrei Vasilevskiy’s left shoulder, marked a milestone moment for the 24-year-old speedster. He’s now registered 100 career points at the NHL level … Bolts blue-liner Victor Hedman was surprisingly helpful to the hosts. Toffoli capped a hard-working sequence by banking an attempted wraparound off Hedman’s skate for the tying tally, while Andersson’s wrister glanced off the arm of Tampa’s top defenceman as he patrolled the slot area … The Flames were unscathed in a dozen minutes of shorthanded action against the NHL’s second-best power-play … Pelletier is accustomed to working the wing, so it’s hardly a surprise that he received a somewhat rude welcome-to-the-big-leagues from a veteran faceoff ace. On both his first and second shift of the afternoon, Trevor Lewis was tossed from the circle on an offensive-zone draw, with Pelletier called upon as his replacement. The youngster was 0-for-2 against Pierre-Edouard Bellemare, who has successfully swiped more than 3,000 of these. “The first two, I was like, ‘Man!’ ” Pelletier grinned. “I think in the AHL, I took probably like five faceoffs the whole year. But it’s great, it’s great” … When their son confirmed that he’d be in the lineup Saturday, Pelletier’s parents hustled to drive from Quebec City to Montreal before catching a flight to Calgary. They were in the Saddledome seats.

The Flames will welcome an old friend — two, actually — for Monday’s matchup at the Saddledome. Departed fan-favourite Johnny Gaudreau, rugged defenceman Erik Gudbranson and the Columbus Blue Jackets are in town for what promises to be an emotional affair (7:30 p.m. MT, Sportsnet West/Sportsnet 960 The Fan) … Dube on Pelletier’s debut: “He looked great. That whole line looked great — him and Walks (Walker Duehr) and Lew (Trevor Lewis) were awesome. They played with a lot of speed. They had a lot of chances early on in the game. Honestly, I think they got us going” … Flames forward Adam Ruzicka, who hasn’t recorded a point in any of his past 11 outings and has watched his icetime dwindle of late, was a healthy scratch for the first time since early November … In this busy hockey market, here’s a local team that isn’t getting enough attention — the University of Calgary Dinos men are now riding a 17-game win spree, matching a Canada West conference record that was initially set way back in 1978-79. Impressive work, boys.