STAMPEDERS NOTES: All eyes on run-game vs. Ticats 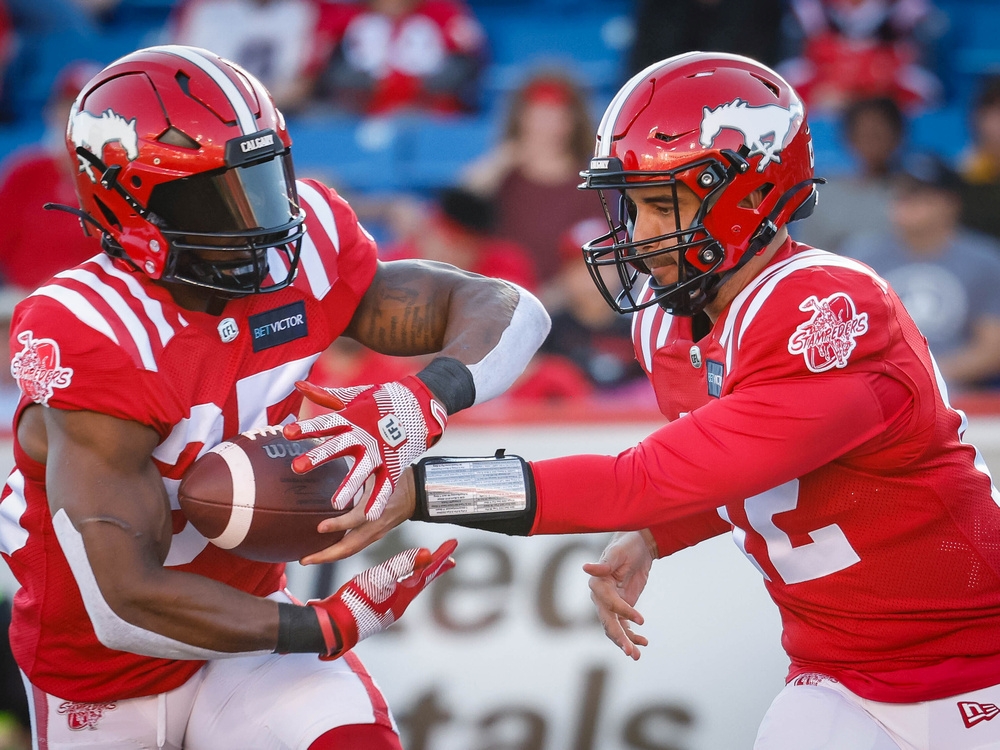 The Hamilton Tiger-Cats have allowed fewer rushing yards than any team in the CFL this season.

The Calgary Stampeders have run the ball better than any team in the league in 2022.
Running the ball is critical to what the Stamps do. Ka’Deem Carey has been the best running back in the league this year and Peyton Logan has flashed in big moments, too.

Ask Carey what he’s got to do to punish the Ticats on the ground in Friday’s head-to-head matchup at McMahon Stadium, though, and he wastes no time deflecting attention to his teammates on the Stampeders’ criminally underrated offensive line.

“It starts up front with the o-line and I feel like we have the best o-line in the league so I’m going to rely on them to push up front and I’ll just make the read,” Carey said. “I’m just hoping the all-star vote comes with at least three or four of their names on it, then I’ll be happy.

“(The o-linemen) aren’t going to talk about it, but we’re No. 1 in rushing and they don’t give up sacks, so what’s the problem?”
We’ll save our deep-dive into the Stamps’ potential all-stars for next week, but without issuing a full-on spoiler alert, it won’t come as any surprise that the Stamps offensive linemen are going to be getting a lot of consideration.

On Friday, though, they’ll have their hands full with a Ticats defence that has done a terrific job shutting down opposing running backs. They’re allowing only 77.5 rushing yards per game, 11 less than the Winnipeg Blue Bombers, who are allowing the second-least

“They’re really savvy,” said right-guard Ryan Sceviour. “They’ve got a real veteran presence. They’ve got Micah Johnson, they’ve got Ted Laurent, they’ve got Simoni Lawrence, so they’ve got guys who have been around the league forever and they know where to be and where the ball is going to go.

“They’re really good at reading plays, so you’ve just got to beat them to the spot.”

It’s worth noting that this isn’t the first time the Stamps have gone up against an elite run defence recently.

Only two weeks ago, they were playing an Argos team that was allowing only 90.1 rushing yards per game going into their matchup at McMahon Stadium, and the Stamps rolled for 161 yards on the ground.

The Ticats do appear to be a different challenge, though. Their record isn’t great, but they’ve won a couple big games recently and desperately need a win to keep their playoff hopes alive.

To beat the Stamps, the Ticats will need to shut down the run-game, so that does figure to be a key battle-ground for both teams on Friday night.
“They’re an aggressive defence,” said Stamps head coach Dave Dickenson. “They’ve got inside players that are big and strong, their linebackers are very athletic and their DBs tackle, so all good things. We have to understand that, yeah, rise to the challenge and see what they can do.”
For anyone looking to past matchups for indicators of how the Stamps-Ticats might go, there’s only so much that can really be taken from their only previous head-to-head game this year.

That was back in mid-June and the Stamps’ 33-30 win in Hamilton was one of the weirdest games of the year in the CFL. The Stamps were down 24-3 at halftime and lost both Carey and Logan to injury, only to come storming back to win the game in overtime.

So that game probably doesn’t tell us much about how Friday night is going to play out, although Carey said the Stamps did learn some lessons from that game.

“We knew coming out of that, they’re physical, they’re a front-running team so when they get momentum, they’re going to be loud and come hard,” Carey said. “We’ve just got to stay locked-in, focused and get off to a fast start against these guys.”

With Malik Henry not practising on Monday or Tuesday, it looks like the Stamps may go with Shawn Bane in his place at wide receiver against the Ticats.

And look, losing Henry definitely hurts. He’s leading the team in receiving yards and touchdowns and is a surefire all-star this season.

It is worth noting, though, that Bane has done pretty well when he’s had opportunities this season. The 27-year-old has 13 catches for 226 yards and a touchdown in six games.

“Yeah, Malik’s had that year where he’s kind of taken his game to that next level, but we’re confident in Shawn.”