STAMPEDERS NOTES: Henry happy to be staying at 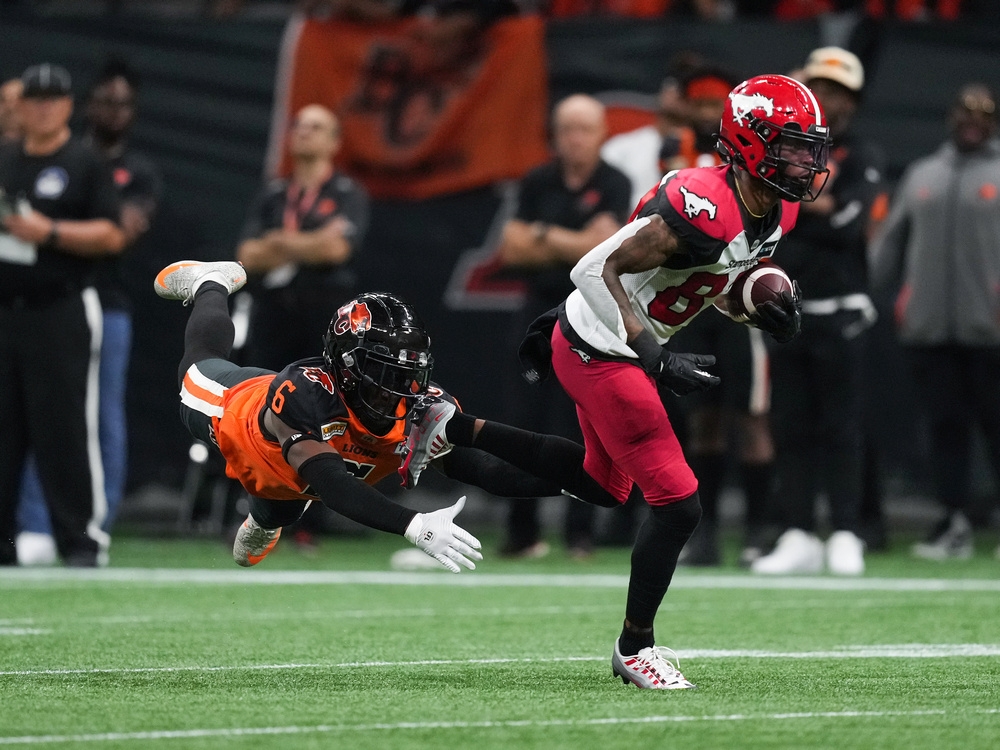 The decision to commit the next three years of his career to the Calgary Stampeders wasn’t all that hard for Malik Henry.

The Stamps’ top receiver in 2022 is a man of few words and he kept it simple when he was asked about re-signing through the 2025 season.

“Calgary definitely feels like home, it has always felt like home,” Henry said. “I like Calgary. Like the place, it feels like home, so I’m here.”
Last week’s announcement that Henry had re-signed came as a bit of a surprise. Longterm deals are a rarity in the CFL for anyone other than quarterbacks and Stamps president/GM John Hufnagel typically gets this sort of business done in the off-season.

But it’s understandable that getting Henry signed was a priority. He’s had a breakout season this year and is near the top of the league with 62 catches for 1,203 yards and eight touchdowns. He’s a lock for an all-star nod at season’s end and at only 25-years-old there’s every reason to believe he’ll only get better.

“Stability is good, especially keeping your youngest talent that has room to grow,” said Stamps head coach Dave Dickenson. “I think both those guys we signed, (quarterback Jake Maier) and Malik, will continue to get better.”

Henry did not participate in Monday’s practice at McMahon Stadium because he’s recovering from a lower-body injury, but he reassured reporters that he won’t be out long. He’s a critical piece of the Stamps’ offence and will be needed for their final three games as the team tries to lock-up second place in the West Division and secure a home game in the first round of the playoffs.

“He got rolled-up last game,” Dickenson said. “I don’t think it’s super severe, hope to get him back out here as soon as possible.”

DONE FOR THE YEAR

Josh Coker is out for the rest of the season, and that’s created a bit of an issue for the Stampeders.

Coker started at left-tackle in the Stampeders’ demolition of the Toronto Argonauts two weeks ago after regular starter Derek Dennis’ season ended with a broken leg.

But Coker tore his biceps in that game and now he’s out, too.

“We were pretty solid, we thought we had good numbers (on the offensive line) but losing Derek and Josh certainly hurt,” Dickenson said. “Opportunities for Bryce (Bell) and Hugh (Thornton) and go from there.”

The Stamps aren’t quite in crisis mode at left tackle, but they’re down to arguably their third choice at a vital position.
They did make a couple moves to add some depth at the position on Monday morning when they signed Leon Johnson and Brandon Murphy.

It’s a return to Calgary for Johnson, who was with the Stamps in 2019 and then started last year with the team, too, before being released.

“Leon was hurt when he was here,” Dickenson said. “I like him as a teammate, I like his work ethic, I know he can play. His body just wasn’t co-operating when he was here. With Brandon, we know he might be a little more of a project but he fit in well today.”

There was hope that rookie SAM Titus Wall might be available coming out of the bye week after missing the last couple months but while he was officially listed as a limited participant on Monday’s injury report, he didn’t do much work.

That doesn’t necessarily mean that he’s unavailable for Friday’s game against the Ticats, but it does seem unlikely.

“He’s closer,” Dickenson said. “He’s going a little bit. The problem is he has a lower body injury and when you’re a DB you’re running all day. I think our back-end has improved and we’re getting better, so no guarantees for anybody when they’re back in the mix, but he was trending to doing some really good things as a rookie.”

Jalen Philpot didn’t practice either on Monday, but Dickenson explained that he had gotten an injection in his foot and should be available for Tuesday’s closed practice.