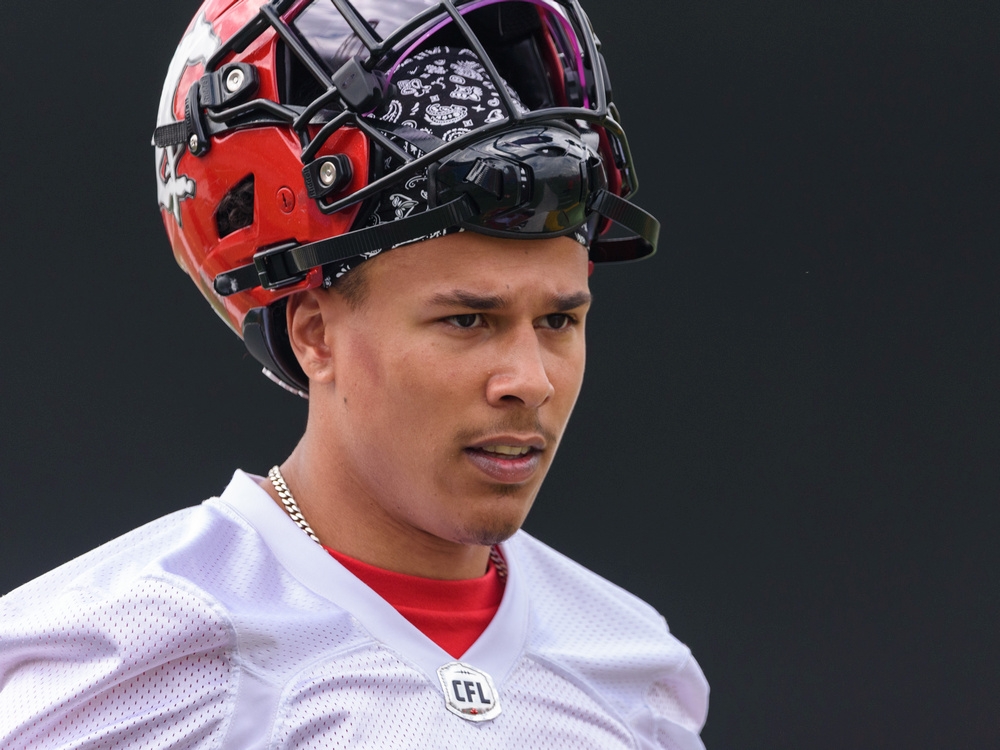 There wasn’t one single thing that had to click for Jalen Philpot.

He was great on kick returns right from the start of his rookie season this year, and showed flashes of what he could do on offence for the Calgary Stampeders, too.

But getting a run of consistent games in at receiver proved to be a challenge.

Recently, though, Philpot has quietly started being a bigger part of the offence. In three of the Stamps’ last four games, Philpot’s had more than 55 receiving yards.

“I definitely feel like I’m gaining trust with (Stamps QB Jake Maier) and the team, but I’m feeling like I can definitely play in this league and it’s starting to become slower for me,” Philpot said. “I’ve been saying that every week, but these last three or four weeks, just going into games has been a different feeling for me.

“I’m not as uptight about the plays and stuff like that. I’m just kind of visualizing what I’m going to do and how I’m going to react to certain defences. I definitely feel like I’m starting to find my groove and fit into the offence.”

It’s certainly not unusual for CFL receivers to take a little while to get going in their rookie seasons.

For Americans, there are adjustments to the Canadian game that need to be made. For Canadians like Philpot who played in the U Sports system, the speed and complexity of playing at the pro level can take time to master.

As a first-round draft pick out of the University of Calgary Dinos, Philpot carried a fair bit of hype coming into this year.

It might have taken him a bit to get going, but he’s been living up to those high expectations in the back half of the season.

“I think he finally got healthy,” said Stamps head coach Dave Dickenson. “He started with a hamstring (pull), then a shoulder and trust me, it was tough. Now, he’s got multiple spots that he’s learning and he is starting to make plays.

“He’s done well as a returner, but on offence you’ve been seeing him get down the field and make plays with yards-after-catch. He’s doing a good job, that’s the guy we drafted and we’re happy he’s filling that role.”

With the injuries behind him, there’s a sense that the best this season is yet to come for Philpot.

With Kamar Jorden and Malik Henry both nearing returns to the field — probably Saturday against the Saskatchewan Roughriders — and Reggie Begelton quietly and consistently having a good season, having Philpot step up would mean the Stamps have a decent number of downfield weapons heading into the playoffs.

The team hasn’t really had all four guys fully going at their best at the same time this season. That should be exciting for Stamps fans.

“Injuries are all part of the game and unfortunately I had to deal with that a little bit this year, but just kind of waited my turn, let me body get healthy and then start showing what I can do,” Philpot said.

Hugh Thornton didn’t practise this week and was listed as “doubtful” on the Stampeders’ injury report when it was released on Thursday afternoon.

Assuming Thornton can’t go, that would mean that Bryce Bell will start at left tackle for the Stampeders against the Riders on Saturday night.

Dickenson, though, was still hopeful that Thornton might be able to overcome the muscle pull in his chest that’s limited him.

“Hugh right now has just got a muscle pull. He needs to play, he needs the reps. We’re comfortable with Bryce. If he doesn’t go right now you’ve got Jonathan Zamora and Keanu Ebanks, our global, but I’d like to think Hugh has a chance. He really needs to play and ultimately as a team we like that continuity if we can get that group together. We’re getting better.”

Good luck guessing how much the Stampeders are going to play their starters this week. They gave a lot of guys a lot of looks at practice this week, but from my perspective on the sideline, there were few clues about how it will all shake out against the Riders … We do know that defensive lineman Folarin Orimolade won’t be playing. He was officially listed as being out on Thursday’s depth chart. Obviously, that’s a big loss, but the Stampeders need him a lot more for the West Division Semifinal against the B.C. Lions on Nov. 6 than they need him on Saturday.