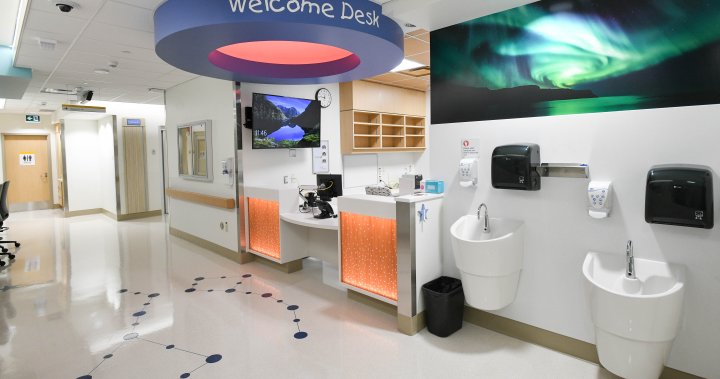 An Edmonton children’s doctor is worried it’s situation critical at the Stollery Children’s Hospital, where the ongoing surge of respiratory viruses in the community has prompted emergency provisions to be enacted.

On Tuesday, Alberta Health Services announced staff with previous emergency room, critical care, inpatient care experience or appropriate skills are being deployed to areas of greatest need and where their skills can be best utilized, to help boost additional surge capacity at the Stollery.

This could mean more staff in the emergency department, PICU, inpatient units or to support new capacity, including additional inpatient medicine surge beds.

The Stollery pediatric ICU is operating at about 100 per cent capacity and the rest of the hospital is experiencing sustained high volumes of acutely ill patients requiring care in the emergency department and inpatient units.

Along with her regular clinic duties, pediatrician Dr. Tesheen Ladha has volunteered to join the surge team at the Stollery ER to help manage the patient load.

She said two extra surge teams have been created above and beyond the normal teams that help admit patients.

“This has never happened before in my 10 years of practice and training before. We’ve never been asked to volunteer in those capacities,” she said one day after the announcement.

“This is unprecedented. This has not happened before.”

Ladha said it’s up to doctors whether they have the time or capacity to take on shifts working at the Stollery, “Because, of course, we’re also seeing patients in our clinics that are quite sick.”

The surge of patients has led to the hospital triggering emergency provisions.

It’s not a state of emergency per se — AHS said they don’t have those for individual sites — but rather, the Stollery’s medical director, Dr. Carina Majaesic, said activating the emergency provision allows the hospital to move workers around, gives physicians different accountabilities with the college and alters the hospital’s insurance policies so staff can work on wards they otherwise might not find themselves.


Ladha said physicians are being asked to help out in two areas: seeing sick kids who show up in the ER and helping care for patients who have been admitted with serious ailments.

She said the situation in pediatrics has been getting worse for many months.

“I wasn’t surprised, but I am disappointed that there’s still nothing being done to prevent kids from getting sick in the first place,” Ladha said.

“The care that is being provided — as hard as we try — it’s still unsafe care because there just aren’t enough of us to provide it.”


This is a public health issue, Ladha said, adding she would like to see a much stronger uptake of the flu vaccine, which doctors say helps keep kids out of hospital.

Vaccine uptake is low in the province, which she said also has the highest influenza activity in Canada.

“I don’t think most people know this, but the majority of kids that get admitted for influenza are unvaccinated.

“The vaccine really does protect against severe outcomes and hospitalisations in children. But we’re simply not seeing families and kids getting it.”

Compounding the issue: kids getting sick with more than one illness at the same time.

On top of that, she said many of the unvaccinated children with influenza she has treated are experiencing really long fevers.

“A good proportion of those — I would say in my practice, 20 per cent — are ending up with bacterial pneumonia. So the issue is when children get a viral infection, they’re much more prone to a secondary bacterial infection like a pneumonia that can then land them in the hospital.”

The Stollery normally operates 236 beds and is the largest children’s hospital (by bed count) west of Toronto.

Influenza was the main virus bringing kids into the hospital earlier this fall. But Majaesic said on Tuesday that has peaked and is steady — now, RSV is on the rise.

COVID-19 is also still circulating in the community and children continue to be admitted to hospital, with 29 kids under 19 among the hospitalisations in the past week — an increase of 12 from the prior week.

Six infants under the age of one were among the COVID ICU admissions this week in Alberta.

Ladha said the never-ending surge of illnesses is a source of frustration and burnout among doctors.

“It’s really disheartening for everybody to not feel like we’re able to care for kids in a high quality way.

“It causes a lot of moral distress.”

“It’s unsafe for children who get sick from anything, because there just simply aren’t enough of us to take care of them in a timely way and give them the quality of care that they deserve.”

The Stollery team works closely with their Calgary counterparts at the Alberta Children’s Hospital. On Wednesday, an AHS spokesperson said inpatient capacity there was over 100 per cent, and the pediatric ICU was under 100 per cent.

United Nurses of Alberta called on the province to “cease treating this situation as if it were a political inconvenience and address it immediately as the public health crisis that it is.”

“I think we really need high-up government leadership to say that vaccines are safe and effective. The influenza vaccine reduces the risk of hospitalisation,” Ladha said.

“For the sake of Alberta’s children, and all Albertans, it is imperative that our government cease treating this situation as if it were a political inconvenience and address it immediately as the public health crisis that it is,” wrote union president Heather Smith.

The UNA said the simplest and most effective policy change that could be implemented immediately would be an indoor mask mandate to reduce the spread of influenza, COVID-19 and RSV.


The union said even a statement acknowledging the benefits of wearing masks could help. Smith called on Joffe to say something. He has made few public appearances since being appointed on Nov. 14.

“Another measure that could help would be for the chief medical officer of health to make a public appearance and a statement on the gravity of the situation facing the province’s health-care facilities, especially pediatric care facilities right now.

“I implore you to do the responsible thing and act. Now is not the time to put politics ahead of our children’s and seniors’ health.”

On Wednesday, Premier Smith repeated what she has said several times in the past when it comes to masking: it’s a personal choice.

The premier noted schools around the province are going on holiday break in a few days, “where the kids are not going to be in a congregate setting in a classroom.”