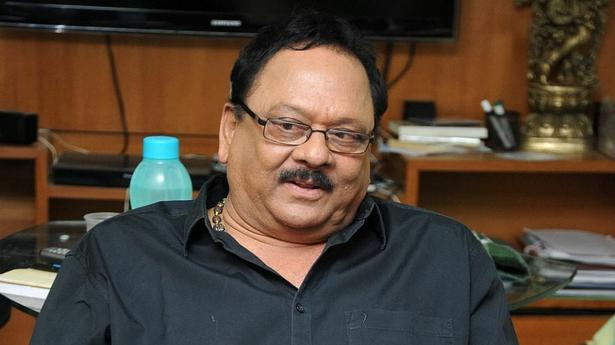 In his film career spanning five-and-a-half decades during which he acted in 183 films, Krishnam Raju went by the name `rebel star’ due to his rebellious acting style

In his film career spanning five-and-a-half decades during which he acted in 183 films, Krishnam Raju went by the name `rebel star’ due to his rebellious acting style

A well-known Telugu actor of the sixties and seventies and former Union Minister of State for Defence and External Affairs U. Krishnam Raju died undergoing treatment following a brief illness at AIG Hospital at Gachibowli here around 3.30 a.m. Raju was 83 and survived by his wife and three daughters.

Krishnam Raju was elected to Lok Sabha in 1998 and again in 1999 on a BJP ticket from Kakinada and Narsapur constituencies. Raju was Union Minister of State for four years during A.B. Vajpayee’s last term as Prime Minister from 1999-2004. Raju quit BJP to join the Praja Rajyam party floated by megastar Chiranjeevi in 2009. He contested from the Rajahmundry Parliamentary constituency in the same year but lost. Incidentally, Krishnam Raju and Chiranjeevi hailed from the same village — Mogaltur — in West Godavari district.

People waiting to pay their respects to film actor U. Krishnam Raju in Hyderabad on September 11, 2022.
| Photo Credit: G. Ramakrishna

In his film career spanning five-and-a-half decades during which he acted in 183 films, Krishnam Raju went by the name `rebel star’ due to his rebellious acting style. Raju started as a hero but switched to playing the role of villain. He made his debut with `Chilaka Gorinka’ in 1966 but `Bhakta Kannappa’ and `Bobbili Brahmanna’ brought him fame.

Raju won five Filmfare awards and three Nandi awards from the Andhra Pradesh State government. Raju won his first Filmfare award for `Tandra Paparayudu’ in his debut year. Krishnam Raju’s journey in films ran parallel to that of greats in the industry at that time, including N.T. Rama Rao, Akkineni Nageswara Rao and Krishna. His younger brother Suryanarayana Raju’s son was Prabhas of Bahubali fame.

Chief Minister K. Chandrasekhar Rao, expressing his condolences on the death of Krishnam Raju, said the latter won the hearts of movie goers as a rebel star with unique acting style. His death was a great loss to Telugu films.