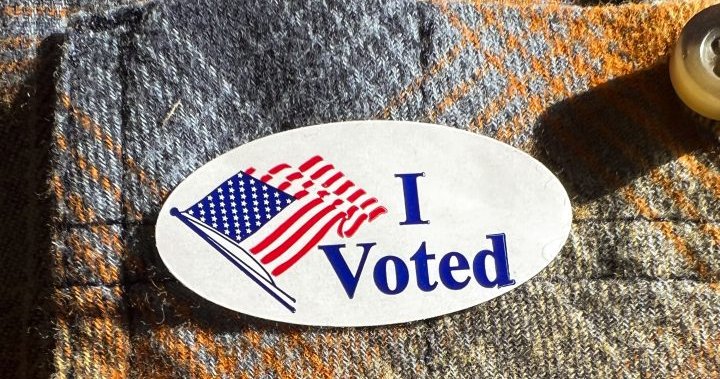 Call it a November surprise.

Democrats are basking in a midterm defeat that feels like victory, an electoral all-nighter that bucks the recent U.S. trend of voters punishing the party in the White House.

But in the process, they may have given fresh life to a new Big Lie: claims of fraud at the ballot box, this time focused on Arizona.

Republicans had a good night and were on track to win control of the House of Representatives, but the “red wave” they were hoping for never happened.

That appears to include Arizona, where former TV anchor Kari Lake borrowed heavily from Donald Trump’s campaign playbook in her bid to become governor.

Despite trailing Secretary of State Katie Hobbs by more than 10 points, Lake is citing widespread reports of malfunctioning voting machines to suggest she was a victim of election fraud.

Who will control the Senate also remains an open question, with the battle between NFL running back Herschel Walker and Democratic incumbent Raphael Warnock likely headed to a December runoff vote.


A narrow margin of Republican victory in the House, uncertainty in the Senate and new, unfounded claims of electoral fraud all point to continuing chaos on Capitol Hill.

And that, in the end, may be the part of Tuesday’s midterm elections that ends up impacting Canada the most, said Eric Miller, president of the D.C.-based Rideau Potomac Strategy Group.

“Even if the blowout is not as big as one thought it would be, you now have a situation where the endless commentary in Canada _ how the U.S. is heading for dissolution, or a civil war, or can’t be trusted, and so on _ is only going to get amplified,” Miller said.

“The system begins to not function the way it should, there is no ability to deal with the big picture problems, there’s no ability to pursue serious bilateral relationships.”

One clear result Tuesday will have a direct impact: the re-election of Michigan Gov. Gretchen Whitmer, the driving force behind the effort to shut down Canada’s cross-border Line 5 pipeline.

Even Prime Minister Justin Trudeau, “the most radical environmentalist in the entire world,” is opposed to shutting down the pipeline, Dixon said during her debate with Whitmer last month.

The Michigan battle was just one of 506 gubernatorial, House and Senate races that came to fruition Tuesday in a midterm showdown that pollsters and pundits had expected to be a bruising indictment of Biden’s administration.

2:25
U.S. midterms: DeSantis thanks Florida voters in ‘win for the ages’


It wasn’t to be _ at least not on the scale that Republicans had hoped.

They were on track to reclaim control of the House, the one outcome that most political experts were confident about predicting, given the traditional pattern of midterm voters punishing the sitting president’s party.

But disappointment in the scale of the victory was written on the face of minority leader Kevin McCarthy, who is widely expected to take the speaker’s gavel away from Nancy Pelosi should Republicans claim the majority.

“It is clear that we are going to take the House back,” McCarthy told supporters in D.C. “You’re out late, but when you wake up tomorrow, we will be in the majority and Nancy Pelosi will be in the minority.”

Canada-U.S. friendship will remain regardless of midterm outcomes: Trudeau

Early on, Democrats managed to hold on to a pair of bellwether House seats in Virginia, a state where Republican Gov. Glenn Youngkin cruised to victory last year despite Biden’s convincing 10-point win there in 2020.

Then, Kathy Hochul triumphed in her bid for a first full term as New York governor, despite a robust Republican challenge.

And in Pennsylvania, Lt.-Gov. John Fetterman, sidelined for much of the summer with a stroke that impacted his speaking style and raised questions about his fitness for office, eked out a narrow but critical win over Dr. Mehmet Oz, another Trump acolyte.

“I’m not really sure what to say right now,” a visibly humbled Fetterman, clad in his trademark black hoodie, told supporters.

“This campaign has always been about fighting for everyone who’s ever been got knocked down that ever got back up.”


In Arizona, a problem with voting tabulation machines promptly fuelled charges of electoral tampering, first from Trump on social media and later by Lake as she urged supporters not to give up the fight.

“When we win, first line of action is to restore honesty to Arizona elections,” she told supporters as she trailed Democrat Katie Hobbs, the secretary of state, by a margin of 12 percentage points with half of the polls reporting.

“When we win _ and I think it will be within hours _ we will declare victory and we will get to work turning this around _ no more incompetency and no more corruption in Arizona elections.”

Neck-and-neck races in battleground states had all but ensured that the question of whether Republicans could wrest control of the upper chamber away from Democrats would not be resolved right away.

In Ohio, venture capitalist and “Hillbilly Elegy” author J.D. Vance _ another Republican with Trump’s seal of approval _ soundly defeated congressman Tim Ryan, a Democrat who had tried to distance himself from President Joe Biden.

0:29
Canada, U.S. will continue to work together ‘whatever happens in the midterms’: Trudeau


And in Wisconsin, Republican incumbent Ron Johnson was nursing a narrow 40,000-vote lead over Democrat Mandela Barnes with about 98 per cent of the vote counted.

That, combined with Fetterman’s win, shifted the focus to Georgia, where Walker and Warnock spent the entire night exchanging a razor-thin lead.

With 95 per cent of the votes in, Warnock was leading Walker by a scant 35,000 votes, but remained half a percentage point shy of the 50 per cent threshold necessary to avoid doing it all over again in a runoff next month.

“We’re not sure if this journey is over tonight, or if there’s still a little work yet to do,” Warnock told his supporters.

“Here’s what we do know: we know that when they’re finished counting the votes from today’s election, we’re going to have received more votes than my opponent.”