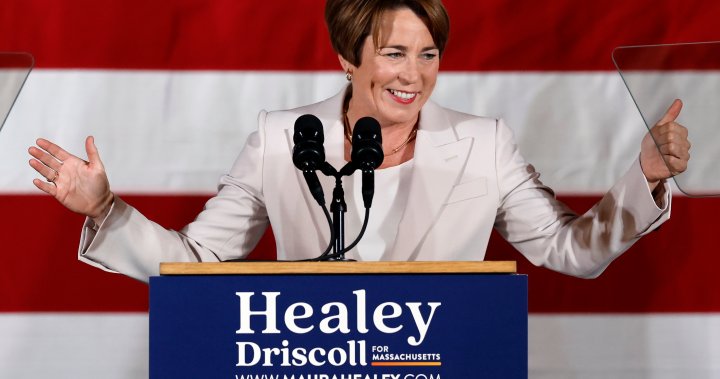 A number of candidates in the U.S. midterm elections made history by winning their races on Tuesday, as voters chose younger and more diverse officials for elected office.

Here’s a look at some of the historic firsts from across the country.

Healey, the state’s first woman and openly gay candidate elected to the office, defeated Republican Geoff Diehl, a former state representative who had the endorsement of former president Donald Trump.

U.S. democracy is being ‘tested,’ expert warns. Here’s how it can be repaired

Her election returns the governor’s office to Democrats after eight years of Republican leadership under the popular Gov. Charlie Baker, who opted not to seek re-election.

“To those who voted for me and to those who didn’t I want you to know that I’ll be a governor for everyone and I’ll work with anyone who’s up for making a difference in this state,” Healey said.

Healey also addressed the historic nature of her win.

“Tonight I want to say something to every little girl and every young LGBTQ person out there. I hope tonight shows you that you can be whatever, whoever you want to be and nothing and no one can ever get in your way except you own imagination and that’s not going to happen.” Healey said.

“I stand before you tonight proud to be the first woman and the first gay person ever elected governor of Massachusetts,” she added.

5:16
Americans head to the polls for midterm elections

Democrat Maxwell Alejandro Frost became the first member of Generation Z to win a seat in Congress, taking over a reliably blue seat in Florida.

Frost, a 25-year-old gun reform and social justice activist, was able to win handily in a heavily blue Orlando-area district being relinquished by Democratic Rep. Val Demings, who lost her challenge against Sen. Marco Rubio.

Frost is a former March For Our Lives organizer seeking stricter gun control laws and has stressed opposition to restrictions on abortion rights.

“WE WON!!!! History was made tonight. We made history for Floridians, for Gen Z, and for everyone who believes we deserve a better future. I am beyond thankful for the opportunity to represent my home in the United States Congress,” Frost tweeted.

Gen Z generally refers to those born between the late 1990s to early 2010s.

To become a member of Congress, candidates must be at least 25 years old. But Frost will be among the minority in the House, where the average age of members was 58 in the most recent Congress.

Moore’s victory flips a governor’s office from Republican to Democratic.

Only two other Black politicians have ever been elected governor in the U.S.: Virginia’s Douglas Wilder in 1989, and Deval Patrick of Massachusetts in 2006.

“When I was an Army captain and led soldiers into combat in Afghanistan, we lived by a simple principle: Leave no one behind. Real patriotism means bringing people together,” Moore told a crowd gathered in downtown Baltimore during his victory speech. “It means lifting each other up and improving each other’s lives.”

2:14
America’s hopes and fears: taking the pulse of voters on eve of U.S. midterms


Moore, a 44-year-old former combat veteran and former CEO of one of the nation’s largest anti-poverty organizations, defeated a first-term state legislator who was endorsed by Trump.

Republican Gov. Larry Hogan, a prominent Trump critic who has been encouraged to run for the party’s presidential nomination as a more moderate alternative, was term limited, leaving the seat open.

Democrat Becca Balint on Tuesday won the race for Vermont’s lone seat in the U.S. House, becoming the first woman and first openly LGBTQ person to represent the state in Congress.

Americans set to vote in pivotal U.S. midterms. What to look for on Election Day

Balint, the president of the Vermont state Senate and a former middle-school teacher, beat the other major party candidate, Liam Madden, an independent who won the Republican primary. Three independents and one libertarian candidate were also in the race.

“Tonight we reaffirmed that Vermont and the nation is still a place where anything is possible. We are all so capable of change and promise and progress, and tonight, after 231 years, Vermonters are sending a woman to Congress,” Balint said to cheers during a speech in Burlington Tuesday night.

Until Tuesday, Vermont was the only state in the country to have never sent a woman to Congress, despite being considered one of the more liberal states in the country. The state’s legislature also has a higher-than-average percentage of women members.

— with files from the Associated Press