‘Ukraine’s very survival is at stake’: How Ukrainian-Americans could influence the U.S. midterms – National | Globalnews.ca 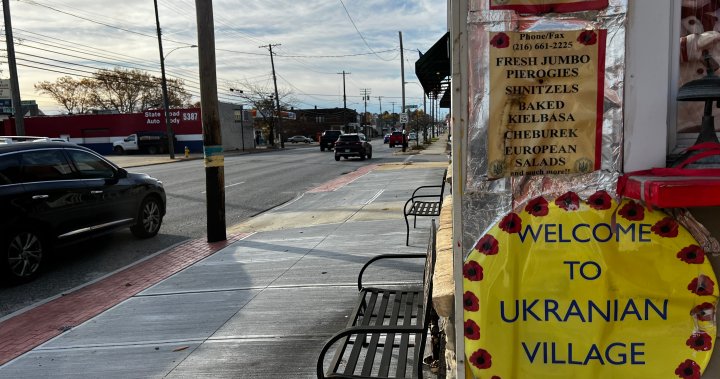 Peter Fedynsky typically votes Republican, but in the U.S. midterm elections on Nov. 8th, he’ll be casting his ballot for the Democrats.

And, he says, many members of his Ukrainian-American community are doing the same.

“They never voted for Democrats but they see that they must in this case, because Ukraine’s very survival is at stake,” Fedynsky said.

Fedynsky lives in the city of Parma, Ohio, nicknamed the ‘Perogi Pocket’ of America. The Cleveland suburb is home to the state’s largest Ukrainian community — around half of its 80,000 residents have Ukrainian heritage. In the heart of the city, called ‘Ukrainian Village,’ businesses fly Ukrainian flags, parishioners sing Ukrainian hymns and restaurants serve Ukrainian borscht.

As U.S. midterms near, here’s what Canadians should watch for

While weighing a bag of deli meat at the local butcher shop, Lyuba Molotkovskiy’s smile dropped as she explained that her sister lives with a newborn near Kyiv. Their neighbourhood has been left badly damaged after it was hit by a Russian rocket.

“There’s no electricity there now. I don’t know how they’ll survive through the long wintertime,” Molotkovskiy said.

“It’s so dangerous. But what we can do?”

One thing she plans to do is vote in the upcoming midterm elections. Ohio’s Republican Senate seat is up for grabs — one of a handful of states that could determine the balance of power in Washington.

Parma’s Ukrainian community was founded in the early 1900s and has traditionally voted Republican. But during this campaign, the Republican candidate for the U.S. Senate in Ohio, J.D. Vance, has suggested the U.S. should stop spending tax dollars supporting Ukraine.

“I gotta be honest with you, I don’t really care what happens to Ukraine one way or another,” Vance told Steve Bannon during an interview in February, while stressing the importance of focusing on Ohio’s fentanyl crisis.

1:26
Canada can be ‘leader’ in providing Ukraine with armoured vehicles: Anand

“Look, I don’t think that we can continue funding the Ukrainian war indefinitely. I think the Biden administration should be pushing to de-escalate the conflict, not effectively commit the United States to supporting a long-term war of attrition between Russia and Ukraine,” Vance said.

“I would like us to de-escalate and spend American dollars on American priorities.”

Vance is not alone. Since Russia invaded in February, the U.S. has approved more than $60 billion in military, economic and humanitarian aid to Ukraine — far more than any other country. Ukrainian President Volodmyr Zelensky has said that continued U.S. support is essential for his war-torn country to defend itself.

The Democrats are pushing forward with another major aid package for Ukraine. But in the face of growing inflation and fears of a recession, the push to reduce or end U.S. military aid to Ukraine is backed by a growing number of Republican lawmakers, including Senate Minority Leader Mitch McConnell.

“I think if the Republicans take control of Congress, as it looks like they will, I see very little likelihood of funding continuing, at least at the level that it has,” explained Justin Buchler, a professor in the political science department at Cleveland’s Case Western Reserve University.

The pushback against more funding for Ukraine is largely driven by Republican candidates endorsed by Donald Trump.

“Opposition to Russia really carried through in the Republican Party until Donald Trump (became president), who aligned himself very strongly with Vladimir Putin,” and promoted “a more isolationist foreign policy,” Buchler said.


Ohio voted solidly for Trump in 2016 and in 2020, so this race was never supposed to be as close as it has been. After former Republican Senator Rob Portman retired, the party nominated Vance, a venture capitalist known for his his best-selling 2016 memoir and subsequent Netflix film Hillbilly Elegy. His opponent is Tim Ryan, a veteran lawmaker in the House of Representatives and 2020 presidential candidate. Opinion polls suggest the race is too close to call.

“Vance is a nonstarter, full stop, because of the Ukraine issue,” Fedynsky told Global News.

The retired journalist has been working to document America’s Ukrainian diaspora. He’s compiling a large album — 700 pages — containing the names and birth dates of some of the 45,000 Ukrainian-Americans who live in Ohio.

“There are a lot of Ukrainian Republicans who have been members of the party lifelong, who say that they will not vote for (Vance). They’ll vote Democrat the first time in their lives,” he told Global News.

“We have good alliances with the Baltic Republics, Estonians, Latvians, Lithuanians, the Poles, the Jewish community. There’s a force multiplier. So we have many, many allies in the community. It’s not just Ukrainian-Americans that we’re looking at here,” said George Jaskiw, vice-president of the United Ukrainian Organisations of Ohio.

“Let’s face it: Ukraine is fighting on because the Western world is providing aid and economic support.”

The future of U.S. support for Ukraine, and perhaps even the war itself, could hinge on the results of the midterm elections.